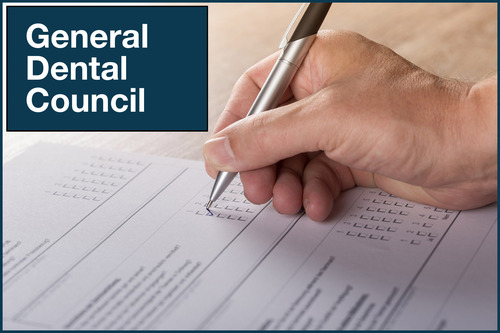 Views on the General Dental Council held by dental professionals, are more negative than positive, according to the latest research commissioned by the regulator.

The GDC has published the findings from its Stakeholder Perceptions Research, carried out by djs Research.

The GDC itself says that the results “Don’t make comfortable reading.”

The GDC said on its website “Perceptions of (the) GDC were more negative (58%) than positive (21%) in 2020, and views amongst the dental team have worsened from when we asked similar questions back in 2018, although views of the GDC did improve slightly amongst dental students and stakeholder representatives.”

The GDC explained the worsening perceptions since 2018 as being “Largely driven by views about our response to COVID-19, ongoing dissatisfaction with fitness to practise processes and communications, and decisions about fees.”

Of the respondents to an online survey, dental professionals held the most negative perceptions, at 65%, while students were the most positive, at 50%.

In its report, the GDC said “The most frequently selected influences on respondents’ perceptions of the GDC were ‘Experiences of colleagues/friends’ (51%) followed by ‘The GDC response to COVID-19’ (45%).”

The report on the survey said that negative words were more often associated with the GDC than positive ones.

When asked to choose from a list, up to three words associated with the GDC, the most frequently chosen words selected by respondents were ‘unrepresentative’ (48%), ‘fear’ (40%) and ‘aggressive’ (30%).

The report said “Students were more likely than dental professionals to associate positive words with the GDC.”

Only 15% of dental professionals attributed the word ‘helpful’ to the GDC, while only 15% associated the word ‘supportive’ with the GDC.

The report said “The proportion of respondents who agreed that ‘the GDC is currently improving’ had also declined since 2018 (from 40% to 31%) with decreases in agreement for each respondent type.”

The interpretation of the term ‘unrepresentative’ was further investigated during interviews with respondents, which “Highlighted particular irritation around the appointment of a layperson as the Chairperson of the GDC and the overrepresentation of laypeople on FtP committees.”

Among key findings, the GDC said on its website that there was a ‘lower awareness’ of its role in setting standards in education.

Of note, interviews carried out with respondents “Also revealed the dissatisfaction among dental professionals with regard to the GDC’s handling of the ARF during the COVID-19 crisis, at a time when many professionals had a reduced income.”

“This included dissatisfaction with the tone of the letter explaining why the ARF had not been reduced.”

An experienced female dental hygienist was quoted in the report as saying “I genuinely did not like the tone of the letter explaining why they weren’t going to change their fees. I thought it was poor. It was crass. It was quite pompous and arrogant... It upset an awful lot of people. Because I really don’t think that they understood how many people are really struggling financially.”

Over half (56%) of all respondents agreed with the statement ‘I believe the GDC overly penalises dentists/dental professionals.’ Figure was  this was similar to 54% of those surveyed in 2018.

Among key findings, the GDC said there was a ‘lower awareness’ of its role in setting standards in education.

GDC Chief Executive and Registrar, Mr Ian Brack said on the website “The findings in this report illustrate some of the frustrations felt in the sector and where we can direct our efforts. The pandemic has thrown up new challenges for us all and exposed some historic ones, not least the need for those we regulate to understand our role and our shared responsibilities in ensuring patients are protected, and public confidence is maintained.”

Mr Brack continued “Reflecting on the findings that dissatisfaction with fitness to practise performance was a significant contributor to negative perceptions.”

“I am accountable for performance of the GDC and very clear about what has not gone well and what we’re doing about it. Without regulatory reform, our ability to significantly improve the fitness to practise process is largely limited to making marginal operational improvements and applying more resource to an inefficient system. Nevertheless, I am determined that we will make the improvements we can.”

Mr Stefan Czerniawski, Executive Director, Strategy said that “A relatively inexperienced team, and overly rigid legislation has tested our ability to manage fitness to practise cases effectively. At the moment, this is our biggest challenge.”

Then writing under the heading “Improving the way we communicate,” Mr Czerniawski said  “We will be working on building trust and credibility amongst the professionals and students we regulate, by being responsive to what we’ve been told. We hope our stakeholders will respond too.”

“Those relationships become even more important as we continue developing our upstream agenda, moving towards a regulatory system that is increasingly based on principles rather than prescriptive standards, and preparing to take advantage of the opportunities created by regulatory reform.”

“Our new Chair, Lord Toby Harris, has started his term with a programme of meetings with a range of key stakeholders to understand the issues faced by the sector and discuss our shared ambitions for the future of regulation.”

“We’ll build on this initial engagement over the coming year to ensure there are opportunities to engage with us through a regular cycle of meetings and events for professionals and stakeholders. We will also expand our student and trainee engagement programme to include more students and education providers.”