Penny Mordaunt Calls For Expansion Of Dental Teaching In The South 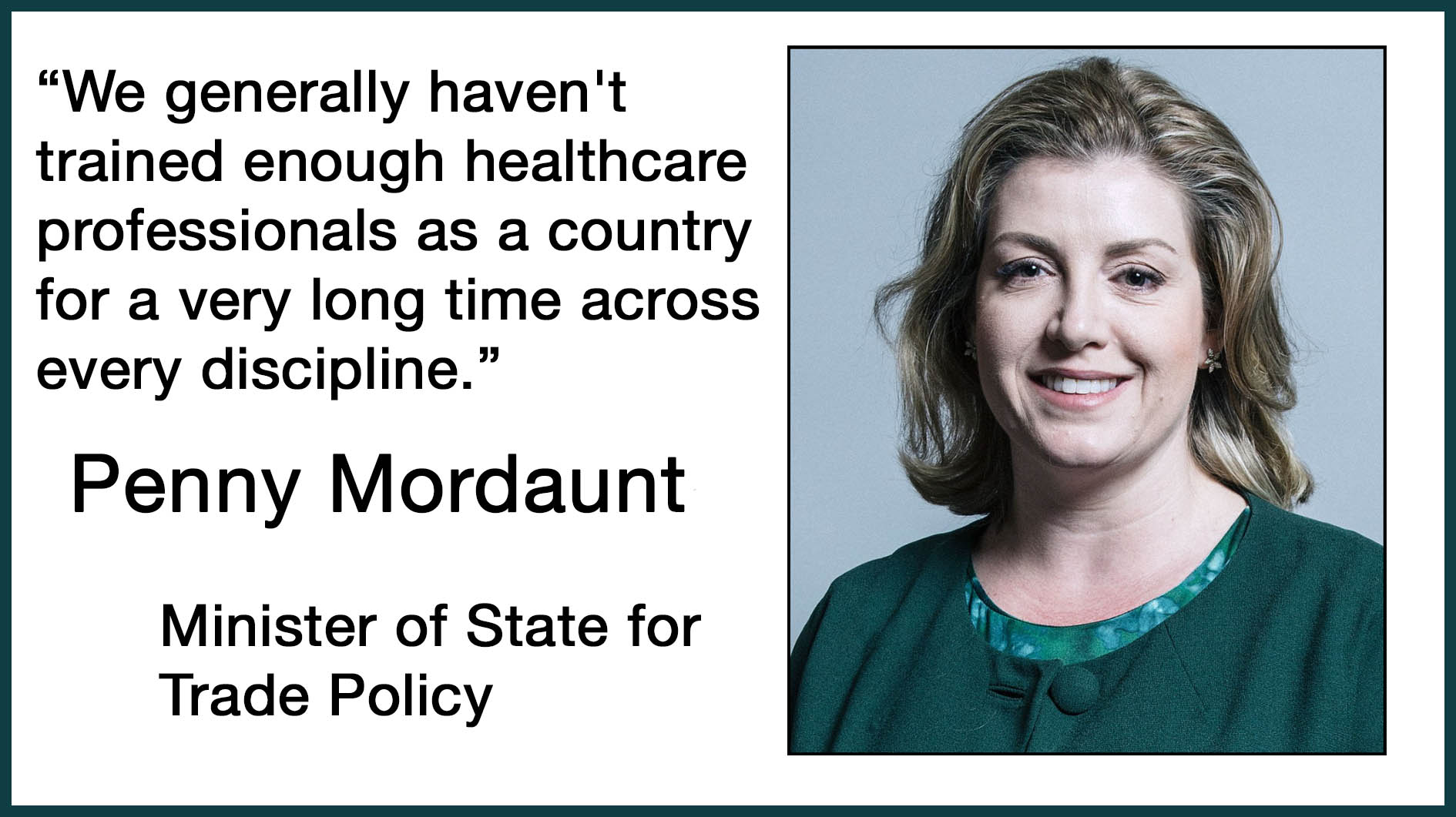 Trade Minister Penny Mordaunt has stepped into Portsmouth and Gosport’s NHS dental access crisis as the morale among dentists serving the area is described by a Local Dental Committee chair as  “Really very low.”

The Portsmouth area has had longstanding problems with NHS dental access, even before the onset of the pandemic.

Back in the summer of 2019, an estimated 20,000 Portsmouth residents lost access to dentists when the Colosseum Dental Group closed three of its practices in the  city.

The Times reported in June 2019 that Colosseum, owned by an investment company based in  Switzerland, blamed the closures on “Longstanding and ongoing challenges in dentist recruitment.”

At the time, The Times said “With no surgeries accepting new adult NHS patients, the nearest practices are in Gosport, which is a ferry-ride away, or Havant, a half-hour drive away.”

Also in June 2019, BDA Chair Dr Eddie Crouch, who was then vice-chair wrote of the Portsmouth practice closures  “The trouble is, their city no longer has a single practice that can accept new NHS patients.”

“Portsmouth is home to over 200,000 people. And the most densely populated metropolitan area in England has now joined the list of communities failed by a broken NHS dental system.”

“For us, this crisis has building for many years – this just adds to the evidence that we are now truly at breaking point.”

Speaking on ITV Meridian in 2019 about the Government’s failure to address the growing pre-pandemic NHS crisis, Dr Crouch said “We’ve been telling them that this crisis is about to develop. They haven’t believed us.”

“We need receptive ears in NHS England and the Department of Health to actually produce solutions because we as a profession would like to provide proper care for our patients.”

The Trade Minister’s intervention comes as The News reported “Cover for patients has been in decay since Colosseum Dental closed three surgeries in 2019 - with only two out of three replacements operational.”

Among calls for implementing a ‘delayed change in NHS dental contracts to end ‘the current perverse incentives’ that mean it’s difficult to make working in deprived areas with higher treatment needs viable, one of the demands is “A mobile dentist to tackle the ‘severity of the situation we face’ for those patients in the middle of courses of treatment but who have lost their cover,” The News reported.

Another demand is for The University of Portsmouth to become a dental school for the south east - building on its current  training programmes for dental nurses, dental hygienists and dental therapists – “To help tackle the ‘long-term failure to train enough dentists.’”

An immediate demand is for the implementation of a replacement for the final ‘Colosseum contract, which has been awarded,” The News said.

Dr Phil Gowers, chair of Hampshire and Isle of Wight Local Dental Committee spoke to BBC South News about NHS funding for the area. He said  "Hampshire traditionally is a bit lower than other areas of the country and Portsmouth is on the lower end of Hampshire."

He said morale was "really very low" with 47% of dental teams looking for alternative careers.

Manager of Healthwatch Portsmouth, Siobhan McCurrach told ITV News that patients “Are struggling to register with a local dentist. They find it difficult to know where to go for urgent dental care. If they go on the NHS website and dentists saying  they’re taking on patients - in actually reality when they find the dentist, they find not they’re not taking on patients.”

Penny Mordaunt told ITV News “We generally haven’t trained enough healthcare professionals as a country for a very long time across every discipline.”

“But what I’m asking from what I’ve been asking for this week is for the government to actually lean in and as well as doing those things like setting up a dental school here and those long term changes to the contract.”

“I want immediately for us to be provided with perhaps a mobile dental service that will actually provide treatment to people who really need it.”

⚓️Portsmouth: over 120k dental appointments lost since lockdown, but services were in crisis long before COVID struck.@PennyMordaunt MP is right.

We need proper investment in the workforce & immediate action so patients can get the care they need.@GowersPhil @HealthwatchPO pic.twitter.com/TA3KHPxbKB

Meanwhile, Gosport MP Caroline Dinenage told BBC News she was "pushing" for improvements, after constituents complained about not being able to sign up to dentists.

“When Smile Dental Care opened a surgery in the former Hanway Medical Practice in Hanway Road, Buckland, in June it was quickly overwhelmed.”

“It was one of the replacement surgeries for Colosseum Dental and (was) commissioned to provide 21,500 units of dental activity a year.”

Last week, Shadow Minister Culture Minister Rachael Maskell asked the Secretary of State for Health what progress he has made on reviewing the dental contract, and in a separate written question, “When he plans to bring forward a new dental contract?”

“Meetings of the Technical and Advisory Groups have been held, alongside a number of focus groups to inform the process.”

“However, any proposed contractual changes must be negotiated with the British Dental Association and may involve legislative changes in due course.”

[Image by Chris McAndrew, CC BY 3.0 <https://creativecommons.org/licenses/by/3.0>, via Wikimedia Commons]