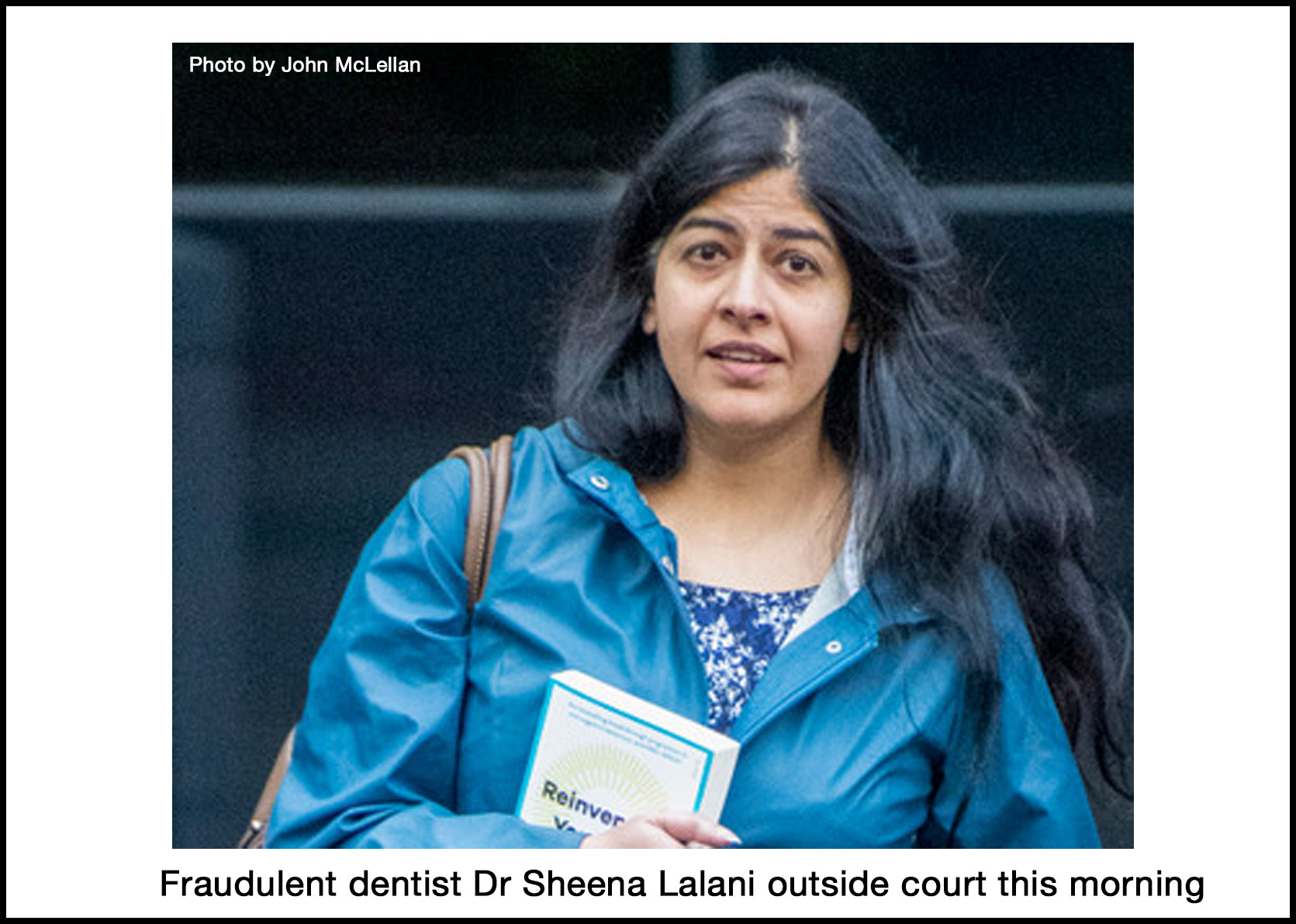 A dentist who practised in Westminster,  has today been sentenced to 20 months’ imprisonment suspended for two years, after admitting falsely  claiming over £74,000 from the National Health Service following an investigation by the NHS Counter Fraud Authority (NHS CFA).

The GDP, Dr Sheena Lalani, had previously pleaded guilty at Westminster Magistrates Court to a charge brought by the Crown Prosecution Service, of ‘fraud by abuse of position’ - an offence under the Fraud Act 2006 - following a lengthy investigation by the NHS Counter Fraud Authority.

The general dental practitioner had been working at two practices at the time the fraudulent claims were uncovered.

A spokesperson for the NHS CFA told GDPUK that Dr Lalani had been the owner of the two practices at the time the offenses were uncovered, Maycroft Dental Care Centre in Woking, and Gentle Dental Care in Chapter Street, Westminster, which is situated less than a mile from Parliament.

GDPUK was told that after the full fraud investigation started, Dr Lalani relinquished her NHS contract at the dental practice located in Woking.

The investigation was sparked after a call was made by a member of the public to the NHS Counter Fraud Authority’s fraud and corruption reporting hotline.

The NHS CFA told GDPUK that the investigation started after the caller had initially reported an apparently innocuous discrepancy between the Westminster surgery advertising dental services five days a week, when  Dr Lalani was only attending the practice two days a week.

Dr Lalani, of Kennington Road, Lambeth, was said to have

fabricated claims in order to increase the money she was paid by the NHS in respect of real patients, as well as fraudulently backdating  claims.

A spokesperson for the NHS CFA said that when investigators initially interviewed the dentist on caution, she told them that if she owed the NHS money, it was only due to poor administrative practices and her record keeping being in confusion and disarray at times, not due to dishonesty.

NHS CFA said that the majority of Dr Lalani’s false claims were for Band 3 treatments – which attract the highest fees.

The investigation uncovered evidence that indicated “A  ‘calculated exercise’ by Lalani  to boost her revenue from the NHS with false claims. It could have not happened through error.”

Evidence of fraudulent activity included the alteration of dates on record care and treatment plans without supporting documentation.

Claims were also not supported by appointments in the appointment diary.

Patients who gave witness statements to investigators, also confirmed they had not received the specific treatments that the dentist had submitted claims for.

The NHS CFA spokesperson also said that discounting the fraudulent claims she made, Dr Lalani’s rate for Band 3 claims overall, was five times the normal number for an NHS dentist.

The dentist was also said to have performed 45 treatments in one day.

The NHS Counter Fraud Authority’s  Head of Operations, Mr Richard Rippin said “We’re keen to make it clear that most dentists are not like this.”

“The last thing we want to do is paint everyone with the same brush.  The great majority of dentists are skilled, honest, hardworking professionals, who put their patients first.”

“When Dr Lalani abused her trusted position by falsifying claims and claiming for work not done, she not only defrauded the NHS but let down the dental profession.”

“It’s quite possible that had she not been caught, the scale of the depth of the crime would have increased.”

Mr Rippin said “In the last 18 months the NHS has been under unprecedented pressure with resources being stretched to the limit. We and our partners in the NHS workforce to ensure that these NHS resources are protected.”

“Today’s result shows the dedication of the NHS surveys national investigations service, taking those who abuse the NHS to justice. We are here to detect and investigate those who commit fraud. We will seek all forms of redress.”

“We urge anyone who suspect someone defrauding the NHS to report them to us.”

NHS CFA said today “Dr Lalani paid back the money shortly before sentencing, and only when the NHSCFA was about to start a confiscation investigation under the Proceeds of Crime Act (POCA) 2002. The payback figure was raised to £87,298.37 to account for inflation. She would have had to be pay this amount under POCA, but that process is no longer necessary - a saving to the public purse.”

The court today ordered the dentist to carry out 250 hours of unpaid work, given a 20 day rehabilitation order and ordered to pay £662.00 of NHSCFA costs within 3 months.