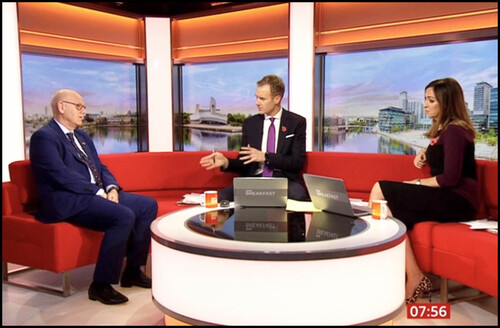 The extent of the NHS dental crisis was brought home to viewers yesterday, when Dr Eddie Crouch appeared on the BBC’s Breakfast programme to outline the problems facing the dental health service.

The British Dental Association Chair had been asked to discuss the crisis on live TV, with presenters Dan Walker and Sally Nugent.

The interview was carried out during a week which saw the Toothless in Suffolk action group take its campaign nationally, by launching Toothless In England.

A few days ago, the group issued a list of six demands of the the Government and NHS England commissioners.

Top of the demands by Toothless in England was the provision of an NHS dentist for everyone.

The group also wants to see the reform of dental contracts so that more dentists will be encouraged to provide NHS treatment.

The group’s spokesperson Mark Jones told BBC News "The public’s oral, general and mental health has continued to suffer in the face of a dental crisis brought about by successive years of government neglect and underfunding by HM Treasury of what is a critical NHS service.”

"We must continue to ramp up the pressure and, as we’ve seen with the Toothless in Suffolk campaign, the public see the campaign as a beacon of hope, something which they will happily get behind and support."

The group is also wanting “An end to the ‘two-tier system” with  hygienists, routine check-ups and preventative treatments being a be a core NHS function.

‘Revenue to cover the 50% of the population that are unfunded by the government, NHS dental treatments to be free at the point of use and people to be prioritised before shareholder dividend - no more privatisation,’ are the other commitments the group is demanding from the Government.

The Breakfast presenters heard from Danielle Watts, the Bury St Edmunds resident who hit the headlines recently after becoming so desperate, she removed eleven of her own teeth because she said she couldn’t find an NHS dentist.

Mr Watts said in a video clip “I did ring 111 Last November because I was having nerve pain and the pain was shooting up my face. I think I hadn’t slept for two nights, and I was I was asked if my face was swollen.”

“I said no, I have no swelling at all. And they just said, then we can’t get you in for an emergency appointment.”

Anthony, a nurse, said “I usually work in Leeds and Essex so I divided my time. I had my wisdom tooth out four weeks ago, and I’ve had some complications since.

I’ve recently started feeling that I’ve been developing infection. Obviously, as a nurse I know the signs or symptoms of that, but I’ve just not been able to get support with that.”

“I can’t get treatment either within the NHS or the private sector at the moment.”

Another contributor was Debroy, from Warrington. He told Sally Nugent, Dan Walker and Dr Crouch of the desperate measures he took to relieve pain.

He said “I had to get take matters into my own hands. I got a hat pin. I heated it up on the hob over the gas and I lanced the boil on the side of my gum and I got  instant relief.”

“I realised I wasn’t going to get any help from the dentist. He was only going to do emergencies.”

Michael from Manchester highlighted that he had more problems accessing NHS care in England, than Wales.

He said “My problems began when I moved away from Wales and moved back to Manchester.”

“In Wales I’d no problem seeing my dentist, but as soon as I got back to Manchester I found it was really difficult to get an appointment and there was quite a bit of a toothache, and it got to a point where it was getting worse and worse.”

“I couldn’t see anyone and eventually ended up having to get an emergency dental appointment. And the result of that was that my tooth out to be extracted.”

Dan Walker said “So many people are sharing their stories, so what is causing the backlog?” He asked Dr Crouch “I imagine those are the sorts of stories you are hearing wherever you go at the moment.”

Dr Crouch said “That’s quite distressing isn’t it - the numbers of people and when we’ve lost about 35 million appointments since the start of the pandemic, and those stories are sadly, typically true.”

Sally Nugent asked “Why are we in this situation?”

Dr Crouch replied “Well, many things really. We had a problem before the pandemic. There were access problems to NHS dentistry before the COVID strike, and it’s made the matter so much worse.

“The funding for NHS dentistry is one area of the NHS where it’s actually lower than it was a decade ago.”

“Remarkably, yes. And you know, it’s the number one problem that comes to Healthwatch. Myself and Sir Robert Francis wrote to the Chancellor ahead of the Spending Review.”

Dr Crouch added “Not a single penny from the Spending Review is coming to dentistry.”

“We need something like that to cure the backlog that we’ve got at the moment.”

Dan Walker asked “So the backlog is one thing I imagine there’s also knock on effects to other areas of the NHS as well?” He said that anyone who has had bad dental pain “Has to get medical help from somewhere.”

Dr Crouch said  “The GP and accident and emergency are the wrong places to go for dental treatment.”

“The numbers of antibiotics that have been prescribed for people who really need dental treatment is inappropriate and at a time when we’ve got problems with antibiotic resistance. It’s not the way forward.”

Sally Nugent asked “But we are hearing that the advice is, if you’ve got a problem to go to an Emergency Centre. Is that not right?”

Dr Crouch replied “Well, the 700 Emergency Centres that were set up at the start of the pandemic are in the main, general practices and they’re trying to deal with their own patients as well. So it’s not the it’s not the perfect solution.”

“What we need is some financial assistance for dentists  so that we can see more patients.”

Dan Walker asked “DIY dentistry! I mean, I’m sure I can see you shaking head already. It’s not something you recommend to anybody but you can understand why maybe there’s somebody watching this morning who’s in really bad pain, who doesn’t know what to do about it. No, the painkillers aren’t helping. What do they do?”

Dr Crouch replied “Well, 111, I’m afraid is probably the answer for them.”

“But many of those patients are struggling to gain access in certain parts of the country. It’s easier than others. In Cornwall prior to the pandemic, people were having to wait about 18 months for an NHS appointment. And that’s probably about three years now.”

When asked what the access situation was in the UK outside England, Dr Crouch said “There’s been better financial support for dentists in Scotland, in Wales and Northern Ireland. They’ve had some funding to  assist them with equipment.”

“We’ve not had a single penny in England. In Wales, they they’re going through a contract review at the moment, which is going to help them.”

When asked if dentists going private was “Because of money concerns? How does that impact on the industry?” Dr Crouch said I think the morale in the profession is the lowest that I’ve ever known it.

“I’ve worked in dentistry for 37 years. I’ve never seen my colleagues so demoralised and unless something really adventurous is put forward by the Government to modernise dentistry and make it a place where we can treat our patients appropriately, I don’t think we’re going to have a solution.”

Dr Crouch said “I would advise anyone who can’t get access to an NHS dentist to write to their MP.”

“I have meetings every week with MPs about the problems that they’ve got. But MPs are the solution.”