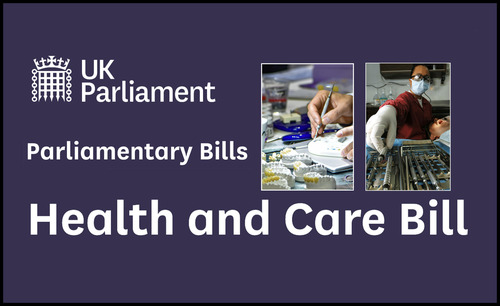 NHS dentistry has received support from Members of Parliament during a Public Bill Committee meeting debating the Government’s Health and Care.

Labour Shadow Minister for Public Health  Alex Norris proposed two new clauses in the Health and Care Bill which would put pressure on the Government to safeguard NHS dental care.

The clauses would not only put the onus on the Government to publish its progress towards ensuring universal access to NHS dental care, but the Government would also be committed  to  publish its assessment of the capacity of dental laboratories to meet the needs of patients.

Mr Norris told the Committee “Almost 1,000 dentists in England have stopped providing NHS services in the last financial year. There was the failed contract—I know there is enthusiasm for contract reform in the Department and we will support the Department on that, but we are running out of time to have anything ready for April.”

“In fact, we are probably already too late in that regard. The shambles of the negotiations before Christmas last year that led to the breakdown and the imposition of targets really whittled away at goodwill and caused a lot of upset.”

“Almost half of NHS dentists are saying that, unless things change, they intend to hand back their contracts or reduce their NHS commitment. This exodus of dentists from the NHS will have a disastrous and lasting impact on our ability to access NHS dentistry. If 55% is the summit of our ambition, goodness me, where will we go from there?”

"The British Dental Association talks about ‘The last-chance saloon; it is not hyperbole to say that we will not have NHS dentistry in the medium term if we do not have a course change.”

“We are seeing significant growth in that space as people living in pain seek drastic action. We will see more pushed on to dental insurance if people do not want to be worried about their finances. That is what privatisation looks like. We will not have NHS dentistry in the medium term unless we do something about this issue—that is the wrong way forward.”

“At the moment, we have a yawning gap. In that lack of leadership, we will see the drip, drip, drip of the loss of NHS dentistry, until we no longer have it.”

The Shadow Health Minister said the “British dental laboratory industry plays an important part in the wider oral health landscape, and it is vital for patients, dentists and other registered dental care professionals. This is an unheralded industry, but it touches all our constituencies, and enables our constituents to live without pain. It also provides skilled work in an economy that has too little of it.”

“It is based in communities all over the country, not concentrated in big cities or in London and the south-east. In many ways, it is a towns industry in a country that desperately needs more towns industries.”

He went on “However, the industry is struggling.”

“It was struggling prior to the pandemic, but it has particularly struggled during it. In the early stages and indeed even today, dentists have rightly—we supported this—been paid full contract for reduced output to reflect the challenging circumstances in which they are operating, but there has never been an obligation to pay this forward to their suppliers.”

“Whereas we might normally expect dental labs to account for 6% to 7% of a dentist’s outgoing, as output has fallen so has that outgoing, so the sector has suffered, but dental labs have needed to stay open to meet need, so they have not been able to completely avail themselves of support.”

“The Dental Laboratories Association is a professional body that covers about 80% of dental laboratories in the UK. Last June, it warned of financial ruin for dental laboratories. In recent conversations that I have had with its representatives, they said that demand has increased, but it is not back to its usual levels, particularly regarding NHS services, and the previous impact is still being felt heavily, such that the industry remains in dire straits.”

“We will lose this sector, or big chunks of it. We will lose British jobs. I know, because I have had conversations with Ministers and the Government on this, that the Government are relaxed about this issue, because they think there will be ample supply from the continent or from China, and in those places, this industry is growing.”

“That is a real mistake, because we would lose control over our understanding of the quality, and particularly the employment and the supply chain. Personally, I think this is an area where we should be once again prioritising buying British, at a time when that seems to be off the Government’s radar, which is really sad.”

The new proposed clause 67 states “The Secretary of State must within six months of the passage of this Act publish a report assessing the capacity of the dental laboratory sector in the UK to meet the needs of patients.”

Mr Norris said “The new clause  is a pretty modest ask in that context. It says that the Secretary of State should enter this space, should have an understanding of what is going on, and should in some way account for it, before we lose this very important industry.”

BDA Chair Dr Eddie Crouch told BDA News "Both dentists and patients will thank MPs for not letting up after the missed opportunities in last week’s budget.”

"It’s time for answers on what meaningful support is going to be offered to ensure this service can have a future. Ministers are offering boilerplate responses when we need a plan and ambition to rebuild services millions depend on."

“As the Bill continues its passage through Parliament, we keep speaking and providing targeted briefings to the Government, MPs and Peers, fighting for the interests of dentists and patients, and trying to strengthen the public health measures included in the Bill.”

Health Minister Edward Argar told the Committee the Government has continued to work with stakeholders and the BDA ‘in particular.’

Mr Argar said “Making the NHS dental contract more attractive to the profession is a key part of helping with vital recruitment and retention. I know that will be particularly welcome to honorable Members from rural and coastal areas, as it has been highlighted that there is a particular challenge in some of those communities.”

“A key objective of this work is to improve patient access to NHS care, with a specific focus on addressing inequalities. We will set out our proposals in that area next year, in addition to the provisions in this Bill that will allow the Secretary of State to expand water fluoridation schemes.”