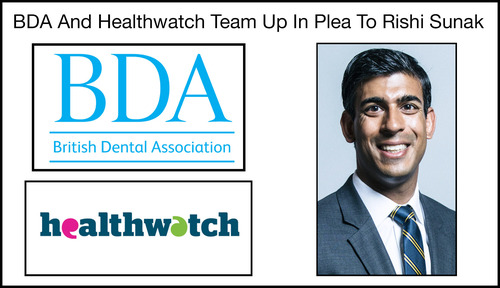 The British Dental Association has teamed up with Healthwatch England to call on the Chancellor Rishi Sunak to use the approaching Spending Review to “Guarantee the future of NHS dentistry.”

The two organisations used an open letter to highlight the impact on dental care that a decade of cuts and COVID-19 have had on NHS dentistry.

The letter came as the Care Quality Commission released its report ‘COVID-19 Insight 10: Dental access during the pandemic.’

The CQC’s report began “Access to NHS dental care for all has been highlighted as an issue since long before the pandemic.”

The report continued “The pandemic has compounded previous issues about access to dental services, as it has resulted in reduced capacity.”

While primarily concerned with the effects that COVID-19 had on NHS dental access, the CQC posed the question “Is there enough NHS dental capacity commissioned, and how will NHS policy leaders and commissioners deal with the demand to ensure those who are vulnerable and without a dentist have equality of access to NHS care?”

The CQC also said, with regard to an access to oral and dental health care in a future system of integration, “With a move to system working and joined-up working in a place, how will oral health be seen as an integral part, providing access to the right service, in the right place, first time?”

The BDA News website said “The Chair of Healthwatch England, Sir Robert Francis QC, has warned NHS dentistry is now at risk of ‘vanishing into the void’ and has urged the Government to use the Spending Review to provide vital investment.”

“Healthwatch has continued to raise the issues faced by patients in accessing NHS dental care – dentistry is now the number one issue patients raise concerns about.”

‘Budgets have failed to keep pace with inflation and population growth. We estimate it would take an additional £879m from the Treasury to restore resources to 2010 levels,” BDA News said.

The BDA said  that while Boris Johnson committed £36 billion to frontline NHS services recently, dentistry didn’t receive ‘a penny of new investment,’  despite the move being called ‘the biggest catch-up programme in the NHS’s history.’

The joint letter, sent to Mr Sunak said “The coming Spending Review is an opportunity to determine the shape of any recovery plan. Even before COVID, England lacked an NHS dental service capable of meeting patients’ needs. Now the pressures of the pandemic mean ongoing access problems, widening health inequalities, and many dental team members reconsidering their futures in the NHS.”

The letter said that the NHS dental service is facing increased demand and reduced supply.

It went on to say that the approach taken in past spending review ‘cannot be revisited,’ pointing out that “In 2015 commitments to annual inflation-busting increases in patient charges served as real barrier to patients on modest incomes.”

The letter said pointedly “With flatlining budgets, what has been dubbed ‘contributions’ has morphed into a substitute for meaningful state investment.”

At a recent protest over the lack of NHS dental provision in the East of England, BDA chair Dr Eddie Crouch, made the same point at a march and rally held in Bury St Edmunds, organised by the action group Toothless in Suffolk.

Dr Crouch said in a recent post entitled ‘Standing together for change’  on the BDA website “It was heart-breaking meeting people who felt they had no choice but to take matters into their own hands.”

“I also met a nurse working in A&E reporting the patients piling in with dental pain. She could see first-hand the pressures failed policies are having across the whole of our NHS.”

“This is the result of a failed contract that before COVID only funded care for barely half the population. For the other half, the message seems to be ’tough luck’. The government needs to stop box ticking and focusing on targets ahead of patient care, so it works for both dentists and their patients.”

Dr Crouch told the Bury rally participants “Some practices are waiting years to fill vacancies. Many colleagues are considering handing back their NHS contracts, retiring early, or leaving dentistry altogether. We simply can’t go on like this.”

The Healthwatch and BDA letter said “The Government has acknowledged that the system NHS dentistry works to is unfit for purpose and has pledged reform.”

“This Spending Review will determine whether necessary resources are in place to underpin the promised rebuild.”

“Patients deserve an adequately funded system that delivers dental care for all those who need it.”

“It is crucial that further increases in patient charges are not used to help balance the books.”

The CQC’s report on the dental service’s COVID related problems did contain one positive.

It said that “Although the majority of feedback Healthwatch received about access to dental services expressed difficulties, some feedback to Healthwatch expressed gratitude for emergency dental care hubs and positive experiences of timely emergency care.”

One patient wrote “I had to make a few calls about a dental problem and after talking to two nurses and one dentist I was seen within a week. I waited in the car, they called me on my mobile, I was met by a nurse at the side door, given sanitiser for my hands and was offered a mask.”

“The dentist was extremely thorough and explained the procedure in detail. Removal of a very decayed, very loose back tooth was painless and quick. Aftercare pack was explained, and I was given a number to call if I was worried about anything. Well done our NHS!”

In contrast, Danielle Watts, the Toothless in Suffolk member whose story hit the headlines a few weeks ago when she reportedly pulled out eleven of her own teeth, wrote on the action group’s Facebook page  “Can I just say that the way I’ve been living is normal to me.”

The pain, the removing my own teeth is nothing to me because it’s how I’ve had to just cope.”

“I’ve never in a million years imagined my story was important because it’s what I’ve had to do. But when I watch this person (me) on the news I feel very sad that this woman, who no fault of her own has had to do this.”

“Before Toothless in Suffolk came along, it was no big deal that I coped by having to remove my own teeth. I feel ashamed that I’ve had to resort to this. I feel so sad for the lady on TV.”

This isn’t about me and my story this is about all of YOU that can’t get a dentist for ourselves and our children!!

"File:Official portrait of Rishi Sunak crop 2.jpg" by Chris McAndrew is licensed under CC BY 3.0