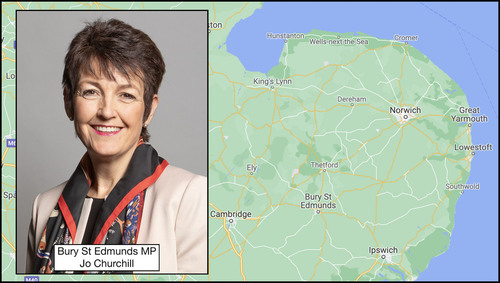 Despite having been moved to the Department for Environment, former Health Minister Jo Churchill has stepped back into familiar old territory -  the NHS dental access crisis.

The difficulty in accessing NHS dentistry in East Anglia has been particularly acute and the MP for Bury St Edmunds has written to her constituents addressing the crisis.

Ms Churchill wrote in a tweet “I have forcefully raised my concerns at the highest level on a number of occasions regarding the provision of dentistry in Bury St Edmunds.”

“During my time as a Minister in the Department of Health several areas across the country were reflective of this challenge, from Cornwall to Cumbria and indeed here in Suffolk; I championed them all.”

“Whilst the solutions are not easy, I believe more con be done to ensure residents of Bury and the surrounding areas con see an NHS dentist for treatment.”

“To this end I will be continuing to demand action to ensure we gain additional NHS dental provision in Bury St Edmunds and Stowmarket.”

The Under-Secretary of State for the Environment held an ‘online dentistry summit’ earlier this week so she could hear the views of her constituents who had experienced difficulties in accessing NHS dentistry.

The East Anglia Daily Times revealed that Ms Churchill’s office had been advised that “A practice in Ely was able to treat an NHS patient from Bury.”

But seeking treatment in Ely would take Suffolk patients into neighbouring county Cambridgeshire and would necessitate a 30-mile journey by car.

Ms Churchill said “But this is not a suitable solution for all.”

The Bury MP added “Recruitment and retention of dentists remains a limiting factor in large parts of East Anglia and the Local Dental Network (LDN) are working closely with Health Education England to improve the retention of Foundation Dentists in our region.”

“There are some excellent Foundation Dentist practices and training schemes in East Anglia and it is critical that we retain those newly qualified dentists post their foundation year.”

“Unfortunately, many young dentists seek the bright lights of larger cities and opportunities therein, which is a problem across many professions.”

Ms Churchill’s letter came as the Eastern Daily Press reported that an Aylsham dentist has warned that Norfolk practitioners might have to take  more private patients, in order to survive in the wake of the pandemic.

Reporter Daniel Hickey wrote “Dr Meetal Patel, of Aylsham Dental Practice, said that in the wake of the coronavirus pandemic surgeries cannot see as many patients as before.”

"The system is quite difficult to manage with Covid, so it may be a case where dentists are having to carry out private work more than NHS work because of overheads and bills," Dr Patel told the Eastern Daily Press.

"You can’t do the same volume of patients. You can’t get patients in and out as you did before."

“The practice is small, with only one dentist and one hygienist,” the newspaper said.

"There used to be two dentists. I am looking after the lists of both now but all I do is emergency work," Dr Patel told the Eastern Daily Press.

“On most days, the majority of appointments are for broken teeth and lost crowns.”

"That’s what my schedule is like. I can’t do any routine stuff," said Dr Patel.

He said a benefit of doing more private work is "more remuneration".

"Even if restrictions are dropped elsewhere, dentists will still have to wear PPE and clean between patients," he added.

Dr Jason Stokes secretary of the Norfolk Local Dental Committee, told the news site that NHS practices are receiving the normal income from the NHS if they are processing a proportion of their pre-Covid patients.

Speaking of the  targets dentists have been working to, Dr Stokes said "I can sympathize not every practice is managing to do that. Thirty to 50% of practices were not having that amount in the previous quarter," Dr Stokes told the Eastern Daily Press.

"For some practices, hitting that target (65%) may be a challenge, but they have been told to keep a record of why they haven’t been able to hit targets and then they can discuss that with the NHS.

"During Covid, my experience is that dentists have been quite well treated by the NHS," Dr Stokes told the news site.

BBC News said a nine year-old girl had been ‘crying in the night’ after waiting nine months to have a tooth removed under general anaesthetic.

The girl’s mother reportedly told the BBC "We’ve been told there are 2,000 people on the waiting list for hospital dental work and 200 on the emergency list for extractions.”

"We even looked into private care but that will still involve a wait and costs £2,500."

"It feels cruel to keep a nine-year-old waiting for all this time," the mother added.

Dr Philip Martin, chair of British Dental Association for East Midlands, told BBC News "With the lockdowns, they have delayed things but even after lockdowns have ended, within the hospitals some of the theatres which would have been used for general anaesthetics and dentistry are having to be used for more urgent services like cancer patients."

[Official portrait of Jo Churchill by Richard Townshend (CC BY 3.0)]