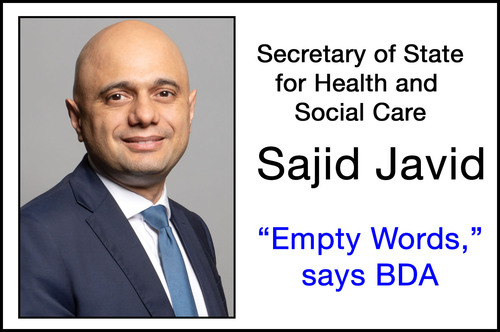 Health Secretary Sajid Javid’s speech to the Conservative Party Conference this week,  which exclaimed “It’s time to level up on health,” failed to contain a single reference to dentistry.

“I want the NHS to embrace innovation and to build a truly modern, digitised system,” he said.

“That’s the only way we can drive down that backlog, and build a sustainable service for the future,” Mr Javid added, ignoring the fact that the NHS dental backlog needs more than just swanky software to cure its current malaise and access crisis.

The Health Secretary didn’t appear to possess the insight and apparent enthusiasm for dentistry that former Under-Secretary of State for Health Jo Churchill oozed in her speech on NHS Dentistry in the Commons in May.

Ms Churchill said “If it has done anything, the pandemic has continued to highlight the fact that transformation in dentistry is necessary, particularly if we want to make sure that we drill down on the oral health inequalities that exist across the country.”

“We need to develop a sustainable, long-term approach to dentistry that is responsive to the population.”

Driving home the fact that dentistry had been omitted from his Manchester speech to the Tory faithful, Mr Javid pointed out that he’d been in his role as Health Secretary for 100 days, and then went on to say “I’ve been inspired each and every day, by the commitment and dedication, of all those on the frontlines of health and social care.”

“The porters, the paramedics, the drivers, the doctors, the nurses, the care workers, the cleaners, the scientists, the vaccinators” all  inspired Mr Javid apparently.

But it seems that at no point, did the Health Secretary draw any inspiration from the tens of thousands of  dental staff who continued to see patients  face to face and almost nose to nose, whereas many GP’s, even now, are carrying out consultations remotely.

Mr Javid appears to be very taken with the concept of horizontal planes, using the term ‘level up’ when speaking about ‘digital health inequalities’ “To ensure the long-term sustainability of health and social care” when he gave a keynote speech to the recent Founders Forum Health Tech Summit, according to Healthcare IT News.

The British Dental Association has called Mr Javid’s ambitions for ‘levelling up’ on health to be “Empty words without a plan for dentistry,” according to BDA News.

BDA News said “The British Dental Association has warned Health Secretary Sajid Javid’s ambition to level up on health will be impossible to deliver without real ambition to reform a broken NHS dental service.”

“In his speech to the Conservative Party Conference the Health Secretary failed to make any mention of the precarious state of NHS dental services. Over 30 million NHS appointments have been lost in England since the start of the pandemic, however even before COVID families experienced a postcode lottery of care,” BDA News reported.

"The crisis in this service predates COVID. It’s the practices unable to fill vacancies, patients struggling to secure needed care, and desperate people taking matters into their own hands.”

"Ministers have a responsibility to ensure the grotesque spectacle of ’DIY’ dentistry ends.”

"We need more than slogans to deliver for millions of patients unable to access care."

Meanwhile, despite the 3% uplift in pay for dentists in England being confirmed by Government in July, no elevation in pay has yet been applied.

The BDA says it is continuing  to  urge the Department of Health and Social Care to decide on  an  allowance for expenses and an overall contract value uplift.

BDA Chief Executive Martin Woodrow wrote in an update on the British Dental Association website “Traditionally, the DDRB (Doctors and Dentists Review Body)  itself made a recommendation on expenses using this formula and therefore also made an overall contract value uplift recommendation.”

“However, in recent years, the Review Body has chosen not to make an expenses recommendation because it does not believe that the evidence it receives in this area is sufficiently robust. We have sought repeatedly to address that issue but we haven’t been able to agree an approach with the relevant administrations.”

“Therefore, instead of a DDRB recommendation on expenses, it has recently been in the hands of governments to come up with an allowance for expenses and then an overall contract value uplift. In England, the government develops an uplift recommendation and consults us at the BDA.”

“Unfortunately, that process has not yet taken place despite the 3% pay element being accepted now more than 10 weeks ago. We have continued to urge the Department of Health and Social Care to get on with this process.”

“We do not yet know what overall percentage uplift the government will recommend, but it is likely to be below the headline 3% pay figure.”

“Whilst the pay uplift should be backdated to April when it is confirmed, the delay is hugely frustrating. We will continue to urge the DHSC to implement the uplift and to argue the case on the profession’s behalf in terms of the expenses calculation,” Martin Woodrow concluded.