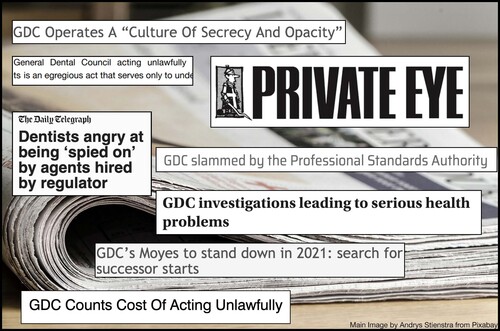 The outgoing Chair of the General Dental Council has criticised the statutory framework within which the regulator works, as “Manifestly unfit for purpose.”

Dr William Moyes, who leaves his role on 30th September wrote in his final blog post on the GDC website that he was ‘frustrated’ by the slow pace of regulatory reform.”

He said “With modern legislation the costs of operating our processes could be significantly less. Achieving this is in all our interests.”

Looking back over his two-term tenure, Dr Moyes said “The decision to raise the Annual Retention Fees was difficult, but it was right.”

“By taking steps to strengthen our finances, the Council was able to make the changes in personnel, policies and processes that were necessary to improve our performance. I remain proud of the work we have done to restore good governance, improve business planning and exercise financial control.”

But the GDC was found to have acted unlawfully in its preparation to introduce the fee rise in December 2014, after the British Dental Association initiated a judicial review.

The GDC wanted to implement a £15 million pound increase in ARF fees.

The consultation behind the fee rise was deemed unlawful, but the judge declined to reverse the fee rise, with ‘administrative chaos’ at the GDC being the reason cited for allowing the ARF rise to be implemented.

But despite the strengthening in finances, in 2020 during the dental shutdown, the GDC refused to adjust the Annual Retention Fee to help ease the financial burden of registrants, particularly Dental Care Professionals.

Under Dr Moyes’ leadership, the GDC also failed to bring in an emergency Payment By Instalment (PBI) scheme, which would have helped DCP’s when their ARF’s were due to be paid.

In May 2020, the then Chair of the British Dental Association, Dr Mick Armstrong wrote to Dr Moyes, saying “The BDA has noted with great dismay and disappointment the GDC’s refusal to support registrants with a reduction of the ARF or at least a payment scheme to allow for payments by instalments during the COVID-19 crisis.”

“Despite recognising the dire financial circumstances in which many practices and individual registrants find themselves, the GDC does not see fit to provide a token support, citing no fundamental change to the work it does and the little financial impact the move would have on registrants.”

“Greater transparency into the reasoning behind this decision would have been the very least response registrants should have received; but the message we are left with is ‘we need all the money and whatever we could do won’t really help you much,” Dr Armstrong wrote.

But in June 2020 GDPUK reported that despite widespread criticism, the GDC, under Dr Moyes’ leadership,  was still standing by its decision to refuse the introduction of an instalment payment scheme for hard-pressed dental professionals, despite being made aware that many lower paid registrants are concerned that they may not be able to afford the forthcoming Annual Retention Fee payment by the DCP July deadline.

It was also revealed in June 2020 that although the regulator refused to act on requests for a PBI scheme or ARF reduction, the GDC had taken the decision to top up the furlough payments of its own staff higher paid staff, to ensure their 80% payments were hitting the Government’s £2,500 threshold.

Even Private Eye highlighted the story in a June issue. A story by journalist Heather Mills said the latest accounts of the GDC show comfortable reserves of more than £24m, despite the GDC saying that it couldn’t reduce fees either because of “Wider uncertainties about our income this year.”

The article pointed out that despite Executive Director Stefan Czerniawski’s assertion in a blog that as a statutory body,  the GDC’s hands were tied, several other regulatory bodies, such as the Nursing and Midwifery Council successfully operate instalment schemes for registration fees.

A GDC spokesman told a reporter for GDPUK at the time “We understand that many dental professionals are facing hard times at the moment and as such the decisions made by Council in relation to the dental care professionals’ 2020 renewal were not reached easily or lightly. Council remains confident however that they were the decisions they needed to make.”

But in the Spring of 2021, the GDC announced that it  was introducing a payment by instalment scheme after all, despite Stefan Czerniawski’s assertion in a blog that the GDC’s hands were tied.

Occasional GDPUK blogger DentistGoneBadd wrote of the GDC “Apparently their financial ‘uncertainties’ had evaporated, despite there being a drop in registrants (and presumably income) over the year.”

Currently, the GDC is appealing a decision by the the Information Commissioner’s Office (ICO) for the release of details in an email Dr Moyes sent to colleagues on 27th April 2020.

In addition to asking about the regulator’s decision to top-up furlough payments, Dr O’Hooley also submitted a Freedom of Information request asking for details on the GDC Council meeting held on 13th May in 2020, where the Council made the unanimous decision not to ‘revisit’ the Annual Retention Fee.

“With respect to the request for information on the decision to top-up furlough, payments, the Commissioner decided that ‘Public interest favours disclosure,” GDPUK reported.

Earlier this week, GDPUK learned that the ICO’s office is also looking into another refusal by the GDC to reveal information regarding the procurement of services by Private Investigators used by the regulator in under-guise operations.

In April, GDPUK reported that the GDC had admitted to Dental Protection under seal in the High Court, that it acted ‘unlawfully in undertaking an under-guise operation without reasonable justification.

Under Dr Moyes’ leadership, the GDC was much criticised for its use of private investigators in operations that many feel are designed to ‘entrap’ registrants. The GDC was ordered to pay out about £38,000 in compensation and legal fees when two private investigators tried to induce a clinical technician from working outside his scope of practice.  The investigators invented a story about a fictitious housebound relative who required treatment.

Dr Moyes found himself at the end of calls for his resignation in 2016 following a damning report from the Professional Standards Authority which investigated concerns raised by a whistleblower in 2013 regarding Investigating Committee processes.

The PSA found ‘unacceptable, organisational and personal failings at the GDC’ and singled out Dr Moyes for failures and ‘inappropriate decisions.’

The Chair was said to have failed to grasp the significance or seriousness of concerns raised by the whistleblower and was slow to inform other Council Members of the existence of the whistleblowing issue.

The GDC Chair was also said to be unwilling to take interim remedial action in response to the whistleblower concerns and even those raised in the GDC’s own report. The Chair and his Council were said to have repeatedly failed in their obligation to challenge information provided by their executive team and the PSA said it was inappropriate for Dr Moyes to appoint the GDC’s former director of governance to investigate their own manager.

The GDC was also said to have prevented. The PSA from accessing the information it needed to complete its enquiry.

Dr Moyes said in his blog, entitled Leaving the GDC in good shape, “Difficult decisions are seldom popular. We understand that.”

“In deciding whether or not to take a particular decision my test, and that of my colleagues on the Council and in the Executive team, has always been whether the decision is likely to improve the protection of patients and the public or to strengthen their confidence in dental services in the UK. This is our overriding statutory duty.”

“It is not the GDC’s role to support the dental professions.”

“This is the job of the Government or the representative bodies.  That remains poorly understood within the profession, which has at times caused unnecessary friction between the regulator and the regulated.”

Dr Moyes concluded “I wish my successor, Lord Toby Harris, all the best. As a member of the House of Lords, and as a seasoned campaigner for the rights of consumers to be treated fairly, I am sure that he will add much to this complex and important area of healthcare regulation.”