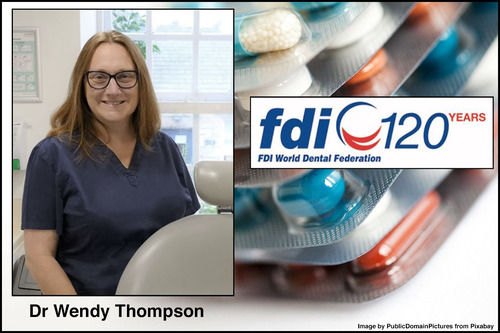 Dr Wendy Thompson, NIHR Clinic Lecturer in Primary Dental Care at the University of Manchester spoke to a global audience yesterday, at the launch of the FDI Pledge on Antibiotic Resistance in dentistry at the first day of the World Dental Congress.

The Congress is being hosted by the Australian Dental Association.

The FDI is seeking support for the move to tackle the growing problem from national dental associations (NDA's) from all over the world, including leading organisations such as the  British Dental Association and American Dental Association.

Dr Thompson’s presentation coincided with the UK Government’s announcement that it is pledging to reduce the overprescribing of medicines.

A press release from the Gov.UK  said “Ministers are announcing action to prevent medicines being prescribed unnecessarily, following a new review led by the Chief Pharmaceutical Officer for England.

The Department of Health’s ‘Good for you, good for us, good for everybody’ document barely mentioned dentistry however, although it did highlight antibiotic prescribing.

“Dentists are responsible for about 10% of antibiotic prescribing for humans globally.”

“All members of the dental team have a clear responsibility to engage, commit and contribute to global, national and local efforts to tackle antibiotic resistance.”

“National Dental Associations and the wider dental community have the opportunity to contribute to international efforts to tackle antibiotic resistance and enhance patient safety.”

During the UK dental shutdown in 2020 when GDP’s were triaging most patients virtually, many expressed disquiet about the increased use of  antibiotics by dentists, who were merely following emergency guidelines.

The FDI says “Antibiotics are the cornerstone of modern medicine. Effective antibiotic drugs are vital to protect people from potentially fatal diseases and reduce risk during complex procedures such as chemotherapy, organ transplantation and other surgeries.”

“Overuse and misuse of antibiotics is driving the spread of drug-resistant infections. Antibiotic resistance is a significant threat to health and wealth. When you need antibiotics, you need them to work.”

The Federation would also like NDA’s to advocate for timely ’access for all’ to oral healthcare to prevent dental infections and promote evidence-based guidelines on the prevention and control of infections in dentistry.

Dr Thompson is also a GDP at {my}dentist in Kirkby Lonsdale on the edge of the Yorkshire Dales and Lake District. She has an international reputation in research related to antibiotic usage.

Dr Thompson led a research team exploring out of hours prescribing and operative procedures in general dental practice, which can be found here.

The GDP and researcher also contributed to a paper on How COVID-19 impacted on dental antibiotic prescribing across England accessible here.

Wendy was the 2020 winner of the Antibiotic Guardian Award for Research and was commended in the Making a Difference Award in 2021. She is also consultant advisor to the Chief Dental Officer of England and a member of various national and international committees.

Wendy is due to speak at the World Dental Congress again next week.

More can be found on the FDI’s antibiotics campaign, including the White Paper on which Dr Thompson was the lead author, by  clicking here.