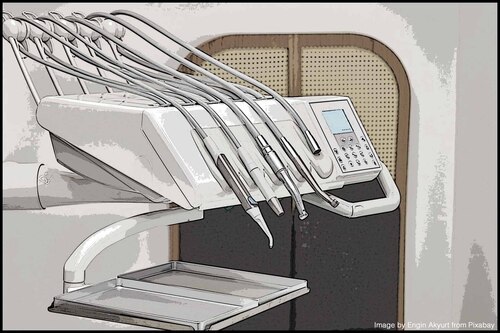 The British Dental Association has helped to stop Local Health Boards in Wales from financially penalising practices who had not hit targets.

Swansea Bay University Health Board was attempting to introduce in-year clawback against practices who in the first quarter of the year, had not reached 80% of fluoride applications for specific groups of NHS patients, BDA News said.

The BDA said that the clawbacks were “Indefensible and went against GDS contractual conditions.”

BDA News said that following concerns expressed by the BDA regarding the ’illegal’ move by Swansea Bay University Health Board, Deputy Chief Dental Officers Dr Warren Tolley and Professor Paul Brocklehurst issued a letter to GDP’s and Health Boards, “To provide clarity on how the GDS contract should be handled with respect to this fluoride varnish measure.”

“We are aware that there has been a misunderstanding over the fluoride application metric. The Chief Dental Officer letter of 18 February 2021 contained an error regarding the reconciliation of the Fluoride varnish target. The letter states “If a practice fails to achieve 75% (a 5% tolerance is allowed) a 5% reduction in ACV monthly payment will be applied in the following quarter payments.”

It was never the intention for a quarterly financial reconciliation to be undertaken and we apologise for the mistake and the confusion caused. The Welsh Government expects Health Boards to undertake any financial reconciliation at the year-end, rather than on a per-month or per-quarter basis. Should practices be below the metric for fluoride varnish during the year, we want to see Health Boards providing support to dental providers who are experiencing difficulty in meeting these activity targets and exploring why they are not being met.”

BDA News said “We also raised with the deputy CDOs that at least two LHBs had intimated in recent written communications to practices that if they failed to meet certain GDS contractual conditions that UDAs might be imposed as a result.”

“This was shocking to hear, given the recent announcement by the health minister Baroness Morgan  that there would be no returning to UDAs as contract reform progresses. We have fought hard to remove UDAs from general dentistry in Wales and support the Welsh Government’s stance.”

Dentists in Wales are also calling on the Welsh Government to quickly ease COVID restrictions after a warning by the BDA.

And the BBC News website said “People could lose teeth unless Covid rules in Wales are eased to allow more to get check-ups.”

The website said “Although there has been a phased return of services, strict hygiene measures and extended time between patients to allow ventilation and deep cleaning is limiting how many non-urgent patients can be seen.”

Since Wales went into lockdown, BBC News said in-person appointments have “Fallen by 97%” since March 2020, “Leading to fears that serious issues could go undiscovered.”

The Welsh Government has released £450,000 to health boards to fund the provision of ventilation units to practitioners in an effort to reduce fallow times.

BBC News  reported “A spokesman said that routine dental appointments had not stopped during the pandemic, but like all NHS services people were being seen “according to need.”

"Since the beginning of the pandemic, dentists have seen more than 1.5m people and provided 350,000 consultations remotely, via phone or video services," a spokesman told BBC News.

"Dentistry has been one of the most challenging services for us to deliver during the pandemic because of aerosol generating procedures such as fillings, and the need for dentists to be in such close proximity to the patient which requires enhanced PPE."

Rachel Flint wrote on BBC News that Dr Gidney said ‘dead time’ was limiting how many non-urgent patients dentists could see, and was creating a ‘bottleneck’ in the system.

He said, while surgeries were prioritising so-called "red patients" - those with underlying issues like gum disease - and emergencies, the wait was making it difficult for dentists to see anyone else.

Dr Gidney, a GDP based in Chepstow, expressed concerned that some people may not have been looking after their teeth as well during lockdown.

“Dr Gidney said it meant minor issues, like a small hole in the tooth, which may not be obvious to a patient, could end up needing a major procedure if people were not able to book routine check-ups.”

"By the time it causes problems, we are often talking towards root fillings or teeth coming out, and then you’ve got things like gum disease or cancer, where there can be no symptoms," he said.

"The only time you really get symptoms with gum disease is when the teeth have already come loose and by that stage it’s too late.

"It might mean people end up losing teeth that we could have saved."

"It’s kind of causing us sleepless nights at the moment, because we don’t know how long it’s going to take to be able to get there," Dr Gidney told BBC News.

In June, GDPUK reported that the Welsh Government announced that the GDS in Wales wouldn’t be returning to the NHS UDA system.

After the announcement the BDA News website said “The British Dental Association Cymru has lauded the statement from Baroness Morgan, which indicates there will be no return to the failed system NHS dentistry operated to prior to COVID.”

“The widely discredited target-based contract for high street dentistry, in operation since 2006, was effectively suspended at the onset of lockdown. It capped patient numbers, failed to reward preventive work, and fuelled both access problems and a collapse in morale among the profession.”