New Chair Of The GDC Announced 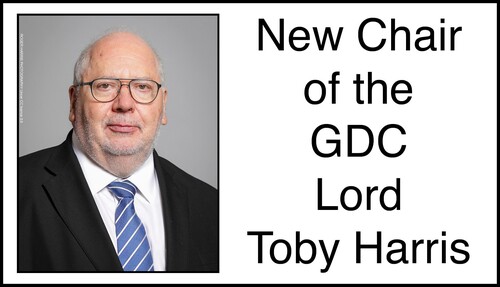 The General Dental Council has announced the appointment of its new Chair of Council.

Baron Harris of Haringey is to take over from retiring Chair Dr Wiliam Moyes, on October 1st.

Better known as Lord Toby Harris, the new Chair has a wealth of experience in public office and health affairs, although he is not a dental professional as many in the profession were hoping.

Lord Harris has been the Director of the Association of Community Health Councils for England and Wales,[5] which was then the national statutory body representing the interests of the users of the National Health Service, from 1987 to 1998.

The new Chair was also a member of the Executive Committee of the Patients’ Association and served on various Department of Health bodies, including Openness in the NHS Steering Group, the Mental Health Task Force Group, the NHS Charter Advisors Group, and the Committee on the Medical Effects of Air Pollution.

Lord Harris was asked by the Minister for Prisons in 2014 asked to lead an independent review into the self-inflicted deaths of 87 young people in prison. This was published in 2015 as the ‘Harris Review: Changing Prisons, Saving Lives.’ It was the considered to be the most substantial review of penal policy for a generation.  Its publication was hailed as “a watershed moment” by campaigners.

In 2016, London Mayor  Sadiq Khan commissioned Lord Harris to conduct an independent review into London’s Preparedness to Respond to a Major Terrorist Incident.  Most of the recommendations of his review were accepted, although not all had been implemented by the time of the terrorist attacks in London in the spring of 2017.

The new appointee was welcomed by dental professional bodies like the British Association of Dental Therapists.

BADT welcome the new Chair of the GDC and look forward to working with him on our concerns in the dental team. https://t.co/7x7H6DGQuW

While I'm disappointed that the call for a dentist to Chair @GDC_UK has not been answered, I look forward to working with @LordTobySays and offer our commitment to work with him and his team to secure the cost-effective, right-touch regulation dentistry desperately needs.@TheBDA

Lord Harris replaces Dr Moyes, who had been widely criticised during his eight-year tenure as GDC Chair.

The current GDC Chair found himself at the end of calls for his resignation in 2016 following a damning report from the Professional Standards Authority which investigated concerns raised by a whistleblower in 2013 regarding Investigating Committee processes.  The PSA found ‘unacceptable, organisational and personal failings at the GDC’ and singled out Bill Moyes for failures and ‘inappropriate decisions.’

‘Bill’ Moyes was also said to have failed to grasp the significance or seriousness of concerns raised by the whistleblower and was slow to inform other Council Members of the existence of the whistleblowing issue.

He was also said to be unwilling to take interim remedial action in response to the whistleblower concerns and even those raised in the GDC’s own report. The Chair and his Council were said to have repeatedly failed in their obligation to challenge information provided by their executive team and the PSA said it was inappropriate for Dr Moyes to appoint the GDC’s former director of governance to investigate their own manager. The GDC was also said to have prevented. The PSA from accessing the information it needed to complete its enquiry.

Following the report, the then Chair of the British Dental Association Mick Armstrong called for the resignation of Dr Moyes.

He said in 2016 “The BDA has consistently argued that the GDC is out of control and unaccountable, once again, we can see why,’ British Dental Association (BDA) chair, Mick Armstrong said.

‘The chair doesn’t understand dentistry and has failed to grasp that a fundamental prerequisite for good regulation is accountability and transparency."

“As this report shows, he has a disregard for his peers and is not open to scrutiny by the council.” He added “Dr Moyes must go.”

The newly-appointed Chair will start his or her term on the 1st October and the role will require a minimum of two days per week.  Lord Harris appointee will be expected to serve a minimum of six years in the role and can expect to receive £55,000 per annum.

One dental commentator told GDPUK this morning “Lord Toby  seems to be a ‘go to’ person when they want something fixing. The present incumbent came with an agenda, outlined in his FGDP speech. Hopefully the new one will come with a fresh pair of eyes and realise he has to work with the profession.”

Another commentator said of the new Chair “Let’s hope he gets that a ‘lighter touch’ is better for the patient.”

Lord Harris said on the GDC website "I am very pleased to be joining the GDC as Chair of Council and look forward to working with my fellow Council Members and the Chief Executive and his senior management team, to ensure that we remain an effective and efficient regulator and that we ensure that public protection is at the heart of everything we do.”

"At this time of significant change and after what has been a very difficult period for many dental professionals as a result of the COVID-19 pandemic, I look forward to working collaboratively with colleagues from across the professions to ensure that our approach to regulation is proportionate and focused on the important areas of public safety and ensure public confidence in the professions we regulate."

Current Chair, Dr William Moyes added "It is great news that the GDC has secured the services of such an experienced Chair and Council Member. I look forward to working with Lord Toby Harris to ensure a smooth transition over the coming months.”

The GDC also announce the appointment of Angie Heilmann MBE as a registrant member of Council.

The GDC website said Ms Heilmann is “A registered Dental Nurse who has had a long clinical and academic career. Firstly, in Scotland and then moving to England in 1986. Angie qualified as a Dental Nurse in 1989 and went on to achieve NEBDN qualifications in Dental Sedation Nursing (with Distinction) and worked in clinical practice until 2007 before focusing solely on Dental Nurse Tutoring.”

“Angie has held a number of educational and tutoring positions since then, most recently as the Dental Workforce Development Regional Advisor for Heath Education England (East) until 2020 and is currently the Director of Dental Nurse Education at Cambridge Dental Nurse Academy, the dental nurse arm of Antwerp Dental Academy. Previously, she was part of the team that introduced Foundation Degrees in Dental Nursing at the University of Bedfordshire.”

“Angie has held a number of non-executive positions, including President of the British Association of Dental Nurses, Chair of the Local Dental Education Committee at Luton and Dunstable Hospital. She is the only Dental Nurse to have sat on the Council of the Society for the Advancement of Anaesthesia in Dentistry (SAAD). She holds a Masters of Medical Education from the University of Bedfordshire and was awarded an MBE for Services to Dental Nursing in 2012.”

She told the GDC website "As a registered Dental Nurse, having worked in dentistry for over 30 years I am thrilled to be joining the GDC as a registrant member of Council.”

"I look forward to working with my Council colleagues and contributing to making the journey better for both patients and professionals."