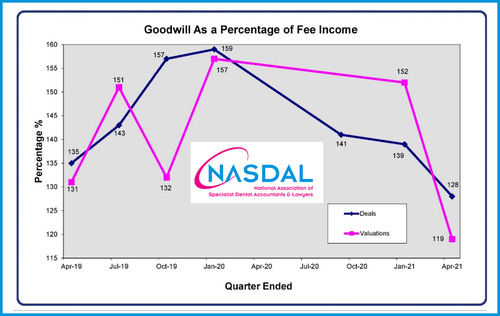 The National Association of Specialist Dental Accountants and Lawyers has published its latest survey results on goodwill statistics.

The survey covered the quarter ending 30th April 2021 and included data on valuations as well as information on properties either bought or sold by the clients of NASDAL members.

NASDAL assessed goodwill as a percentage of fee income in all types of practices.

The survey showed that across all types of practice, goodwill as a percentage of fee income appeared to be down to 128%.  This compared to 139% experienced in the quarter to January 2021.

The survey showed that the biggest drop was experienced by NHS practice goodwill.

NHS goodwill was down from 191% of gross fees in the previous quarter, to 146% at the end of April.

“Mixed practices, which can be the most volatile of the three categories, saw quite a leap – up to 156% of gross fees compared with 110% last time.”

Alan Suggett, specialist dental accountant and partner in UNW LLP who compiles the goodwill survey, said, “I wonder if the big drop in valuations has seen the dental valuation market catch up with the prices that are actually being paid and is just the market correcting itself.”

“In regard to the big drop in NHS practice values, I would have to say that I am somewhat surprised by this. It has certainly not been my subjective experience. I have heard some raise concerns about the long-term effect of the Covid pandemic on the ability of NHS practices particularly to run profitably.”

“While the virus was initially seen to be short-term and something that we might be over in a few months, banks were perhaps willing to lend on previous accounts and figures. As it rumbles on, less so.”

“It does seem likely that from a dental perspective there will be longer term implications in regard to PPE, patient numbers, air filtration and so on. Whether this will hit NHS practices hard that needed a good level of patient throughput to be successful, only time will tell.”

The goodwill figures are collated from accountant and lawyer members of NASDAL in order to give a useful guide to the practice sales market and only relate to the first quarter of 2021.

A spokesman for NASDAL said “That as with any averages, these statistics should be treated as a guideline only.”