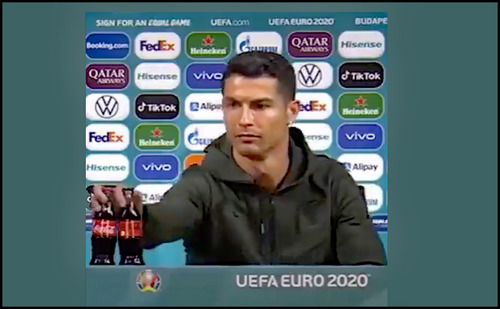 Cristiano Ronaldo’s much publicised shunning of Coca Cola at the UEFA Euro 2020 football tournament couldn’t have come at a better time for the UK Government’s strategy to reduce sugar intake.

The Portugal team captain, who plays for Juventus, caused a massive stir when he removed two Coke bottles out of shot during a television press conference before his team’s match with Hungary.

The striker then held up a bottle of water, telling reporters in Portuguese, to “Drink water,” The Independent reported, although he appeared to simply say “agua” on the video footage of the incident.

Ronaldo’s action provoked much interest in the general press and on social media, sparking a debate on sugar intake and healthy diets.

The incident came just a few days before the publication of the Government’s response to the consultation on ‘Introducing further advertising restrictions on TV and online for products high in fat, salt and sugar’ (HFSS).

The Government’s Executive Summary said “Current advertising restrictions for HFSS products during children’s TV and other programming of particular appeal to children are insufficient to protect children from seeing a significant amount of unhealthy food adverts on TV, and do not account for the increasing amount of time children spend online.”

The Government said that following careful consideration of evidence submitted by stakeholders during the consultation, it had decided on “Implementing further HFSS advertising restrictions on TV and online represents the best intervention to meet the objective of reducing children’s exposure to HFSS advertising.”

The Government’s executive summary said it had decided to adopt the policy after considering a range of alternatives, including enhanced industry-led measures.

The document went on to say that the UK-wide policy to be applied would introduce at the end of 2022, a 9pm TV watershed for HFSS products as well as a restriction of paid for HFSS advertising online.

The Government’s watershed policy will also apply to on-demand programme services (ODPS) under the jurisdiction of the UK.

Non-UK regulated ODPS’s will be included in the restriction of paid-for HFSS advertising online, because they outside the jurisdiction of UK jurisdiction.

The Government has said “Childhood obesity is one of the biggest health problems this nation faces, with one in every 3 children in England leaving primary school overweight or living with obesity.”

The consultation was launched in response to the Government’s ambition stated in 2018, to halve childhood obesity by 2030.

A few days before the Government’s response to the consultation, the British Dental Association welcomed the leadership from Cristiano Ronaldo on the BDA News website.  It warned that “Sustained effort is required UK and worldwide to remove the deep rooted and pernicious influence of junk food brands across sport.”

But the BDA pointed out “The captain of the Portuguese national team has promoted KFC - together with its partner brand Pepsi - while his Italian Serie A Club Juventus receives funding from both Coca-Cola and M&Ms.”

The website went on “The BDA believes the Government should apply the same logic to junk food sponsorship, as has been previously applied to alcohol, tobacco and gambling. While there are moves to ban junk food advertising in primetime, sports sponsorship appears to offer a get out clause.”

"We have a player sponsored by KFC, playing for a team funded by M&Ms and Coca Cola itself.

"Sporting heroes provide wall to wall marketing for brands that actively undermine the oral health and overall health of consumers. As dentists, we know that no amount of exercise will protect against tooth decay.

"If ministers are serious about taking junk food advertising off the menu for children, they cannot leave sport untouched."

Every time I see a new patient with erosion and decay due to sugary fizzy drinks I will ‘do a Ronaldo’ ❤️ https://t.co/IxBxsCkhgY

The Government’s full response to the consultation can be found here.