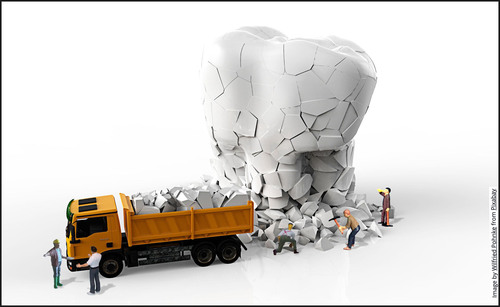 NHS dental charges will be removed North of the border if the SNP wins the Scottish Parliament election in May.

The Scottish National Party has pledged to abolish NHS dentistry charges if re-elected, in its 75-page manifesto entitled ‘Scotland’s Future.’

The SNP has also pledged to protect free prescriptions and to increase frontline NHS spending by at least 20% - estimated at £2.5 billion.

The Scotsman newspaper said abolishing dental charges would  impose an estimated £100 million burden on the  public purse, and raised questions about how an SNP Government would pay for the move.

The SNP has also pledged to freeze income tax for the next parliamentary term.

SNP leader and First Minister, Nicola Sturgeon reportedly said she wanted to ensure cost was not a barrier to accessing health care, and that building on the scrapping of prescription charges, NHS dental costs would be abolished.

Ms Sturgeon said the ‘inequity’ of dental charges, which had seen “Nye Bevan, the founder of our NHS, resign from government” 70 years ago, had to be resolved and by scrapping the fees the SNP would "complete a mission to restore all of Scotland’s NHS to its founding principle – universal healthcare, provided free at the point of need.”

The SNP manifesto said "In removing NHS dental charges we will engage with the British Dental Association, and others, to learn from the experience of the pandemic to help shape a reformed funding arrangement for NHS dentists so that they are supported for the future."

The British Dental Association said on the BDA News website that it has indicated it is ready to work with a future SNP government.  The BDA said the SNP’s pledges “Could fundamentally change the way dentistry is delivered in Scotland.”

BDA News said “Approximately 20% of the NHS dental budget – some £74 million in 2018/19 - is drawn from charges. The BDA believes charges represent a tangible barrier to care for those on modest incomes but will be seeking assurances that any move will not lead to a reduction in overall funding for the service.”

“Public Health Scotland data has shown a dramatic reduction in NHS dentistry due to COVID, which is hitting those in the most deprived communities the hardest.”

David McColl, chair of the British Dental Association’s Scottish Dental Practice Committee, told BDA News "Dentistry in Scotland risks becoming a casualty of this pandemic. We have called for wholesale change to the way care is delivered, and we will work with the next Scottish Government to achieve that.

"These are big plans to bring down barriers to care and improve access, but they must go hand in hand with needed investment if services millions depend on are going to remain sustainable.

"Practices are now operating at a fraction of their former capacity. Dentists will need real and ongoing support if we’re ever going to meet historic levels of demand."

Launching the SNP manifesto, Nicola Sturgeon vowed to abolish all NHS dentistry charges if they were re-elected next month. She said it was ‘70 years ago this month’ that Nye Bevan resigned from government in protest at the introduction of NHS dental charges.

True up to a point, but Bevan’s policy on NHS funding was more nuanced and should serve as a warning to dentists 70 years later.

When the NHS was set up, it was to be a service funded out of general taxation, not a national insurance scheme. Bevan was pretty well given an open cheque book by the Cabinet, to spend whatever it took.

In two areas however, medicines and dentistry, ministers were not in control of spending, as this was dependent on demand from patients and clinicians’ prescribing patterns.

A bare 15 months after the NHS was born and following the devaluation of the pound against the dollar, prime minister Clement Attlee told the House of Commons that prescription charges would be introduced, not just for the revenue raised, but “to reduce excessive and, in some cases. unnecessary; resort to doctors and chemists.”

The minister charged with introducing the legislation for this was none other than Nye Bevan. But within a year of the NHS’s inception, the Government realised that “the blank cheque on social expenditure was not sustainable.”

Bevan was also having problems with the costs of NHS dentistry, especially with the provision of dentures, which was far exceeding forecasts. His approach to dentists was very different and this is where dentists in Scotland and the BDA should be worried.

A further crisis erupted in 1992, when a fee cut of as much as 25% was threatened, although ‘only’ 7% was imposd. But by then a pattern had been established, as dentists were able to offer more and better restorations, so fees were held down or reduced.

Although Nicola Sturgeon has anticipated an increase in demand, she has given no indication of how it will be paid for. Over 70 years of experience suggests that dental practices will pay the price.

The BDA has pointed out that the dental budget in Scotland has been cut in real terms in three out of the last four years.and will be seeking assurances that any move to scrap patient charges will not lead to a reduction in overall funding for the service.

The Scottish Budget 2021-22 provided £431 million for general dental services, a rise of just 0.6% from the year before which represents a real-terms cut at a time the service faces an unprecedented backlog.