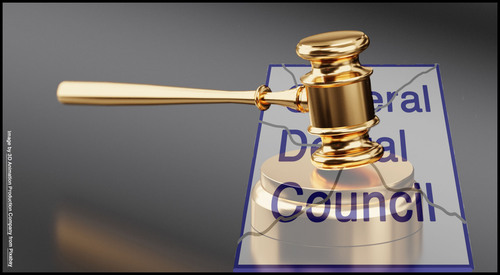 The General Dental Council has admitted to Dental Protection that it acted ‘unlawfully in undertaking an under-guise operation without reasonable justification.’

As a result of Dental Protection’s successful defence of their member, the GDC has had to pay an undisclosed sum of damages to a clinical dental technician.

A press release by Dental Protection said the member had been the subject of an anonymous complaint to the GDC that he may be working without registration, and that his laboratory was in a bespoke setting in his home.

The GDC instructed an under-guise operation creating a fictitious scenario with two private investigators posing as relatives of “Evelyn”, an elderly relative who needed dentures but was too ill to attend in person.

The story hit the headlines in 2019 when Daily Telegraph reporters found that the GDC has spent thousands of pounds on hiring private investigators to pose as patient’s families during investigations into complaints against registrants, in what BDA chair Mick Armstrong described as ‘entrapment.’

According to the Telegraph, “Between 2017 and 2018, the GDC paid £17,064.85 to private detective agency ‘Invicta Investigation’ to “investigate complaints or information received in respect of a registrant’s fitness to practise.”

The Telegraph said: “In one instance in 2016, two private investigators paid for by the GDC attended an appointment of a dentist (sic) posing as relatives of an elderly lady called ‘Evelyn’. The investigation against the dentist (sic) in question was subsequently thrown out, with the GDC having to pay legal costs of those involved.”

GDPUK has seen a response to a Freedom of Information request submitted by a dental professional in January 2020.

In the FOI request, the GDC gave their reasoning for being more likely to use private investigators when looking into complaints against DCP’s.

The FOI response said “Scope of practise concerns, which are the type of case in which we would be most likely to use under guise visits (by private investigators) to investigate, are extremely rare in relation to dentists, as they have the broadest scope of practise of all dental professionals, being the most highly qualified.”

“For this reason, the more likely registrant groups in which we would investigate under guise are dental care professionals whose scope of practice is less extensive and can involve working to the prescription of another type of dental professional to whom a specific task or dental treatment is reserved.

The Interim Orders Committee into the clinical dental technician concluded that any evidence from the investigation was flawed and unfair. The GDC Fitness to Practise Committee halted any further action on grounds of an abuse of process.”

“Most recently, the GDC accepted a declaration by the court that it has acted unlawfully by undertaking an under-guise operation without reasonable justification. This is in breach of the clinical dental technician’s rights under Article 8 of the European Convention on Human Rights, the Data Protection Act 1998 and Data Protection Act 201,” said Dental Protection.

Raj Rattan, Dental Director at Dental Protection, said “The GDC targeting its own registrants without a sufficiently justified cause is extremely concerning for dentists. The use of an entirely contrived scenario about a sick pensioner in very difficult circumstances was designed to trigger an emotional response and lure a registrant into acting outside of their scope. This is hardly an ordinary opportunity for wrongdoing, and it is unfair and invasive.

“This has been a harrowing time for our member, and we hope that no one else needs to suffer in the same way.”

“We have very strong concerns about the use of undercover investigators. Dental professionals should be able to be confident that any investigation into them is based on their real-life practice and interactions with others, and not on concocted situations with operatives actively seeking to gather evidence that could be used against them.”

“I am pleased that we were able to go above and beyond in supporting our members, using our discretion to provide additional assistance and successfully securing financial damages.”

GDPUK asked Dental Protection if their successful defence of their member could leave the GDC open to other actions by registrants subjected to scrutiny by private investigators.

A spokesperson for Dental Protection said this morning “Not necessarily in relation to registrants who have been subject to scrutiny by private investigators per se, although Dental Protection considers it to be an inappropriate tool for a health regulator to use  This is all about unfair investigation by the GDC.  The point about this case is not so much the undercover investigation itself but the unlawful procedural grounds.”

“So it was the unfair way in which the undercover investigation was conducted and led to a finding of abuse of process that resulted in the staying of the Fitness to Practise process.”

This isn’t the first time the GDC has been deemed to have acted unlawfully.

In 2014, the regulator was found to have acted unlawfully on setting professional fees after the British Dental Association initiated  Judicial Review proceedings.

The BDA was attempting to prevent the GDC from implementing a £15 million increase in ARF fees.  Although the consultation behind the ARF rise had been deemed unlawful, the judge declined to reverse the fee rise for dentists, after their counsel cited the risk of ‘administrative chaos’ at the GDC if there was a reversal.

The then Chair of the BDA Mick Armstrong said “This case has revealed that a regulator, unaccountable to government, can be found to have acted unlawfully but still walk away with its ill-gotten gains.”

I am very pleased to see that this case has now concluded with an admission by the GDC that they were wrong. I was the file-handler until I left DPL. During the last few years, the GDC seemed to pick on CDTs although this was the worst example of GDC bias. I congratulate DPL (and Susie Sanderson who took over the case) and Lee Biddle. It was necessary to get approval up the line at DPL to proceed to the High Court and to have the use of a superb QC, Jeremy Hyam, but they listened to my argument and fully supported Mr. A.
I did try and get pictures of the two undercover agents but could not find any.
I hope the GDC will stop this insidious way of investigating.
Brian Westbury Academic Dean FFLM
1