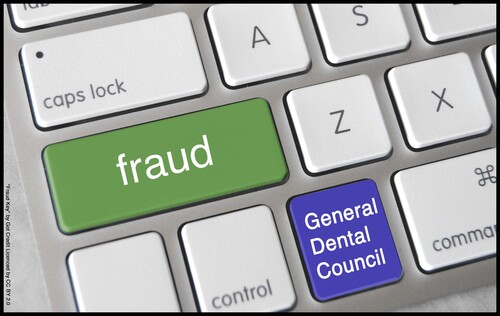 Two recent General Dental Council hearings appear to raise questions regarding the ‘robustness’ of the regulator’s checks on the certification submitted by applicants to the dental register.

An Interim Orders Committee issued an interim 18 month suspension on Ms Sahar Tara Sadeghpour, after it was found she had gained registration as a dentist through submitting an allegedly false BDS she claimed to have gained from Kings College London (KCL).

The GDC registered Ms Sadeghpour as a dentist in June 2015, although she claims she has never practised as a dentist.

A report of the IOC hearing said that in October 2020, the GDC received information from an anonymous informant. raising concerns about the veracity of her registration as a dentist.

The hearing, partly held in private, was told that Ms Sadeghpour, who previously held registration as a dental nurse until 2015, submitted documentation purporting to confirm she held a BDS qualification from KCL awarded in 2007.

The GDC has obtained information from KCL which indicates the letter she presented from the Kings College may not be authentic. GDC investigations are still in progress.

The remote IOC hearing also heard allegations that Ms Sadeghpour submitted a previous application for registration as a dentist she made in October 2014, just one year before she was registered by the GDC.

The committee heard Ms Sadeghpour  withdrew that application for registration as a dentist in 2014 when she was  informed that the GDC were intending to seek verification about her qualifications, by contacting QMUL.

Enquiries since made with QMUL by the GDC have shown that QMUL have no record of her obtaining a BDS degree in Dental Surgery.

In the second remote hearing, a Professional Conduct Committee erased and immediately suspended a dental nurse after it heard she fraudulently procured inclusion on the dental care professionals register by submitting a fake qualification certificate.

It was heard that in support of her application to the register, Ms Iflah Amjad Ali submitted a City & Guilds diploma in Dental Nursing which was later found to not be genuine.

The GDC alleged that the certificate of qualification Ms Ali submitted in support of her application was fake based on incontrovertible evidence that Ms Ali did not complete the Dental Nursing Diploma with City & Guilds and “following on from that she was not issued with a certificate from City & Guilds.”

The PCC heard that Ms Ali  had not completed all of the tests and/or units required to obtain a Level 3 Diploma in Dental Nursing from ‘City & Guilds and that the certificate she submitted included an enrolment number and date of birth belonging to another individual.

The GDC has drawn past criticism from the British Association of Dental Therapists (BADT) and British Society of Dental Hygiene and Therapy (BSDHT) for its verification processes.

Currently, qualified overseas dentists from outside the European Union can join the dental care professionals register as dental therapists, without having to pass a practical examination to test their practical skills.

Overseas dentists who wish to register as dentists, have to pass either the Overseas Registration Examination, or the Licentiate in Dental Surgery.

The GDC’s own website shows that overseas dentists taking the ORE examination fail the practical manikin examination at high rates.  In January 2020, 50% of candidates failed the practical test in Part 2 of the ORE.

The GDC is not prevented by legislation from introducing a practical test for dentists wishing to register as dental therapists, but despite warnings, has resisted calls to do so.

A large number of independent companies advertise their services to overseas dentists, offering to help them to gain registration as dental care professionals, mainly as dental therapists or dental hygienists.

Many emphasise that registration as either DCP will mean they can circumvent the necessity to sit  the ORE or LDS examinations.

Currently, the GDC assesses the skills and qualifications of dentists wishing to register as dental hygienists by a purely paperwork assessment of curriculums, qualifications and ‘learning requirements.’

In 2019, a GDC spokesperson said that as part of the assessment process, an  “Individuals’ qualifications are assessed by a panel of three independent experts against the learning requirements for the relevant dental care professional title.”

A spokesperson told a reporter from GDPUK that GDC statements  “Set out the robust processes in place to ensure individuals have the requisite level of knowledge, skill and experience prior to being able to join the Registers.”

As far back as 2010, a woman hit the headlines when it was found she worked in NHS hospitals across England as a senior house officer, for nine years, after forging qualifications.

Despite holding a fitness to practice panel looking into Vinisha Sharma, the GDC closed the case without discovering her deception.

The BBC News website wrote “In 2007 Sharma tried to gain full registration with the GDC. This was a paper exercise, but it was turned down because she did not appear to have the requisite knowledge and skill for full registration as a dentist.”

“However, she managed to carry on working due to her temporary registration. This included operating on people under supervision.”

“She appealed this decision and it was turned down in April 2008, but her fraud again was not discovered.”

BDA Chair Dr Eddie Crouch, who was at that time speaking for Birmingham Local Dental Committee, said “This case should be of concern.”

He said: "I think it’s important that the General Dental Council carry out the specific checks on dentists who come into this country to work to ensure that they are adequately trained and adequately qualified.”

"[That is] so that patients have real confidence in the dentists that they are seeing for their treatment."