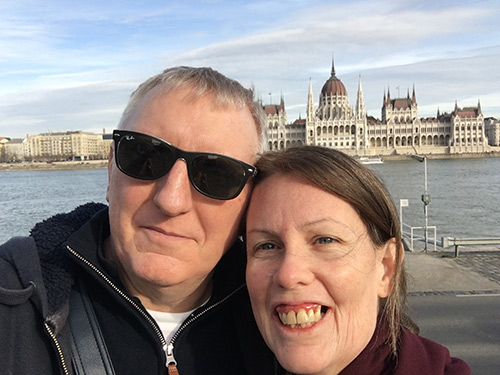 Sarah Davies from Coventry had a non-healing mouth ulcer that was diagnosed as mouth cancer. The wife and mother-of-one had radiotherapy and chemotherapy was given the all clear five years ago. To improve awareness of the disease, Sarah is sharing her story as part of November’s Mouth Cancer Action Month.

Sarah Davies (46) was set to celebrate her 40th birthday when her life took an unexpected turn that would change her life forever. The wife and mother-of-one from Coventry began to feel some pain in the left side of her gum, just below one of her back teeth.  She thought it was just a mouth ulcer, but something was odd about it. “At first, I didn’t think much of it and carried on with my everyday life,” Sarah says. “It didn’t feel like a normal mouth ulcer though, sometimes it would send a feeling like an electric shock through the left side of my face.”

One month later, when the pain and inflammation did not go away, Sarah booked an appointment with her dentist. The dentist treated the tooth above the inflammation with a filling.  When the problem continued, Sarah visited another dentist who suspected it was sinusitis. It would be another nine months, after several dental visits and a last-ditch trip to A&E, that Sarah was finally given the diagnosis of mouth cancer.

Sarah says: “The doctor told me that they had results from my biopsy back and they had found malignant cells.  From what they could tell, the tumour was 20mm long and was squished up against the gum.” Despite several knock-backs, Sarah’s persistence meant that she was able to catch her cancer in the early stages. This gave Sarah the very best chance of beating the disease.

Sarah received both radiotherapy and chemotherapy and was given the all clear five years ago. Despite surviving mouth cancer, Sarah continues to live with the after effects that impact her life to this day. She adds: “Following my treatment, I developed trismus, also called lockjaw, which has impacted my life dramatically.  I am only able to open my jaw a matter of millimetres so eating with a knife and fork is tricky and it takes me a long time to eat my meals. “When going out with friends and family I usually order kids meals so that people aren’t waiting around for too long and if I want a drink, I have to do it through a straw.”

As is common with many mouth cancer survivors, Sarah’s taste buds and salivary glands were also affected, taking some of the joy out of eating and making swallowing more difficult. Despite the setbacks Sarah has always kept a positive attitude.  She admits to still having her down days when she feels frustrated or depressed but her friends, family as well as support from Macmillan nurses keep her going.

Sarah adds: “Some friends have commented that I’m amazing for having the attitude that I have but I don’t think of myself that way.  When you’re dealt something, you’ve got to face it.  I’ve got an incredible family and friends who’ve supported me through it all. The way I look at it is that you’ve got two choices; do what has to be done or give up. Giving up isn’t an option.”

Sarah is sharing her journey to raise awareness during November’s Mouth Cancer Action Month. The charity campaign, run by the Oral Health Foundation, hopes to encourage more people to be mouthaware by being able to recognise the early signs and symptoms associated with mouth cancer.

For more information about mouth cancer, including how to do a self-check for the disease, visit www.mouthcancer.org.