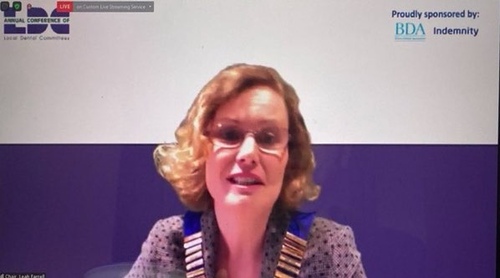 In the wake of the Covid-19 crisis, for the first time the Local Dental Committee Conference 2020 was held virtually, courtesy of Zoom. It was chaired excellently by Leah Farrell, ably assisted by the 2021 chair, Stuart Allan. If there was one message to be taken away from all sides on the day, it was that UDAs were finished and should never be revived.

Motions from LDCs were, as always at the heart of Conference, with the proposer filmed making an opening statement. There was a positive vote supporting Durham, Sunderland, South of Tyne and Northumberland Councils as they move to Public Consultation on Community Water Fluoridation was supported. This is the fourth year in a row that LDCs have demonstrated "grass roots" commitment to getting behind the campaign to see targeted CWF implemented.

The GDC came under attack in many motions, especially for its actions (or lack of them) during the Covid crisis. Problems getting PPE were also highlighted. The plight of some associates was also debated.

The GDPC update was given by chair, Dave Cottam, who reported on the virtual negotiations and thanked all those who had taken part. Many of the frustrations the profession had experienced in England were due to having to refer decisions up the line and the primacy that Public Health England had in matters of cross infection control, including PPE and the ‘fallow’ period. He also outlined the severe problems had in Wales, Scotland and, especially, Northern Ireland.

Dave outlined work in progress, before handing over the GDPC Vice Chair Shawn Charlwood to update Conference on the negotiations for future contract reform. All sides agreed that post-Covid there would be less opportunity to generate UDAs, which should be abolished. The future service should, in the view of NHS England, improve access, address health inequalities and the based-on prevention.

The address by CDO England, Sara Hurley, took the form of a pre-recorded interview with Conference chair, Leah Farrell. Sara thanked the whole profession for its response to the Covid crisis. Many dentists and DCPs had volunteered to work outside their comfort zone, working away from their practices and contacting their patients remotely. She said that there was now an opportunity to move away from UDAs and focus on prevention. It was an opportunity for the profession to show the rest of the NHS what it can do.

In addition, Sandra White from Public Health England was interviewed by Judith Husband and outlined the role of her office in dentistry and public health. She also affirmed to the LDC conference that there is high level political support for Community Water Fluoridation. Declarations of continuing support from the profession, like the LDC Conference vote, add to the growing calls for action.

Health Minister, Jo Churchill MP, who responsibilities include prevention, public health and primary care, gave a virtual talk to Conference. She also thanked the profession for its efforts during the pandemic. She praised Local Dental Networks and Local Dental Committees and all who had provided an ‘exceptional’ service. She too looked forward to the opportunity to move away from UDAs and provide a service with more emphasis on prevention and with new ways of working, including remote care.

Dan Cook (Gwent LDC) was elected to chair Conference in 2022 and Stuart Allan was installed as chair for the 2021 Conference in Manchester (hopefully).

It is rumoured that the BDA are planning to not proceed with LDC Officials Day but they considered this meeting a success so they will use this format again, possibly in December.  Another use could be an LDC Special Conference, as it would save much time, travel, hotel bills, catering and so on.