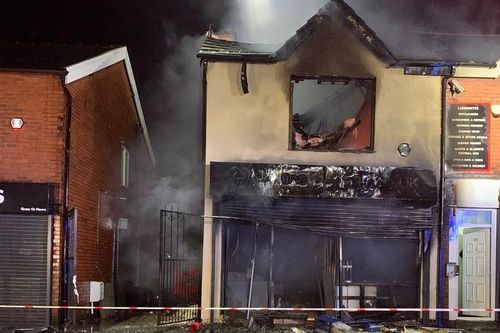 The Manchester Evening News has reported that police have launched an investigation after a ’premeditated arson attack’ on a pair of dental labs in Farnworth, Greater Manchester. They have discovered CCTV footage of two men, who they believe to have started the blaze, entering the rear of the building and there was a large explosion soon after.

Pristine Dental Laboratory and R&W Dental Lab were gutted after the building they were based in, in Plodder Lane, Farnworth, went up in flames shortly after midnight on December 27, the paper has reported. Fire crews tackled the blaze, which tore through both the ground and first floor, as well as the roof space, throughout the night.

Police have now launched an investigation into the incident after they discovered CCTV footage of two men, who they believe to have started the blaze, entering the rear of the building. The pair were inside the premises for about 10 minutes before a large explosion was heard. The footage then shows the men running back out through the rear entrance, police say.

The fire is thought to have started in Pristine Dental Laboratory, which is based on the ground floor, before spreading to R&W Dental Lab on the floor above. Several other buildings also sustained some damage, including Retail Laundry next door. The street has been taped off for four days while forensic investigators combed the scene, but has now reopened.