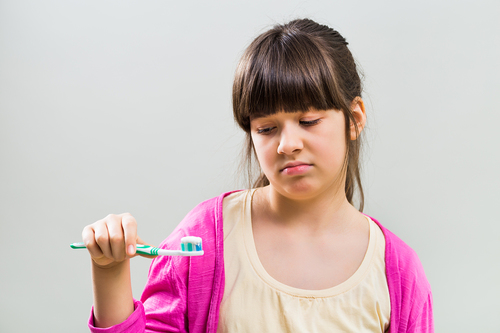 Research from Oral-B has revealed that British kids brush their teeth just nine times a week. But 46% of children have already had a filling or cavity as a result of tooth decay. Oral-B has launched #strongteethstrongkids campaign to support parents and encourage them to take part in their #bedtimebrushchallenge to improve their children’s oral health.

UK parents are being pushed to the brink as they try to get their kids to take dental hygiene seriously. Research from Oral-B has shown that 70% of parents say ensuring their children regularly pick-up a toothbrush is the most stressful element of modern parenting. On average, parents will spend nine minutes nagging their kids to brush their teeth and when the little ones finally get brushing, they only last an average of just 76 seconds, well short of the two minutes recommended by dentists.

Despite frustrated parents’ best efforts, British kids are brushing their teeth on average just NINE times a week, skipping on at least 20 occasions every month. The research has been discovered by Oral-B, in conjunction with their #strongteethstrongkids campaign, which is encouraging parents to take part in a #BedtimeBrushChallenge. The campaign aims to raise awareness of the importance of oral health and support parents in the UK to ensure children have access to better oral health care from home, with tips from experts and parenting influencers.

The study found that 70% of parents admit that the flashpoint of brushing can cause tantrums. So, it is no surprise that 71% admit they sometimes give up and let teeth-brushing slide to avoid a major meltdown. If their children were left to their own devices, only 22% of parents reckon that they would do any brushing at all. This is despite the fact that the average British child consumes three fizzy drinks, three packs of sweets, and a staggering four chocolate bars every week, according to the research.

A whopping 86% of British parents admit that their child eats too much sugar, which is one reason why 46% of kids have had a filling or a cavity. Problems with brushing causes parents some social anxiety too, with 7% of parents admitting they are ashamed of the state of their kids’ teeth and 30% saying they constantly worry about their kids’ teeth.

Adam Parker, Northern Europe Marketing Manager, Oral-B said: “This research shows just how hard it can be for parents to encourage their kids to brush their teeth well every day. We’re on a mission to improve the oral health of kids in the UK by helping parents make brushing fun. We launched the #bedtimebrushchallenge to support parents in educating children from a young age about the importance of oral health whilst giving people the chance to win brushing bundles for the whole family. We believe that strong teeth make strong kids and we’re excited to see how many people take part in our challenge”.

The study found that only 18% of parents say they are proud of their own dental health, 15% admit to having bad teeth and 19% say they wish their own parents had forced them to brush more. A staggering 96% of parents wish that dental hygiene was taught in school, perhaps as it might make enforcing an oral health routine at home easier. When it comes to routines, 62% of kids brush their teeth every morning, 58% every night, 55% use a good toothbrush and just 51% go to the dentist every six months. Only a third use a fluoride-rich toothpaste and just a quarter manage to have any sugar-free days at all. Stoke on Trent is the brushing capital of the UK, where kids brush 11 times a week - and for around 90 seconds*, compared to Leicester where they only brush eight times a week and for 60 seconds.