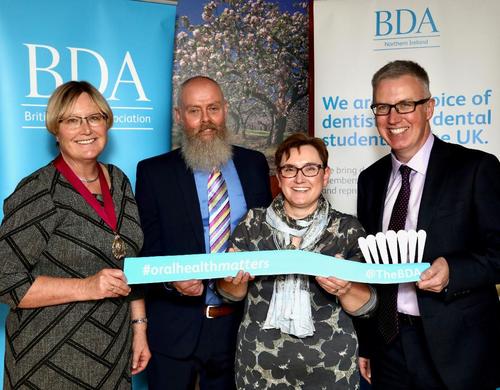 Two new ‘Oral Health Options’ action groups are to be established in Northern Ireland, focusing on child oral health and oral health of the elderly. While welcoming this initiative, the BDA says it will need to be accompanied by adequate investment and a commitment to address the needs of the dental workforce if it is to be successful, the dentists’ body warned.

BDA Northern Ireland has campaigned over many years for action to deliver improved oral health outcomes in Northern Ireland in particular for children and the elderly. The current Oral Health Strategy is now 12 years old, having been launched back in 2007.

According to the latest Child Dental Health Survey which was published in 2015, just 19% of 15-year olds here were considered to have ‘good oral health’. In 2017/18 almost 5,000 (4,724) children faced tooth extraction under General Anaesthetic (GA) in Northern Ireland (x3 times pro-rata than England). BDA Northern Ireland has also highlighted the mounting pressures on dentists to meet the increased challenges from a growing ageing population that is increasingly retaining some natural teeth into old age.

BDA NI Council chair Caroline Lappin said: “The news that two new Oral Health Options groups are to be established by the Department of Health focussing on how to best address the significant oral health challenges we face, is welcome news. We want to work towards improved oral health outcomes for the most vulnerable cohorts of our population.

“These new focus groups give dentists an opportunity to work collaboratively with Department of Health and HSCB colleagues to generate ideas to deliver much needed advances in the population’s oral health. Today’s announcement builds on the important groundwork done by the BDA, DoH and HSCB to get us to this point.

“The pressing needs of the local dental workforce will have to be factored in if this work is to ultimately succeed. Our Community Dental Service is already unable to meet the existing demand for oral health care - while General Dental Practitioners are increasingly struggling to make health service dentistry a financially viable proposition. Whatever options are generated, additional investment to bolster oral health in Northern Ireland will be necessary. Going forward, improving oral health must be viewed as integral to embedding the prevention agenda, and delivering wider public health benefits to the population.”