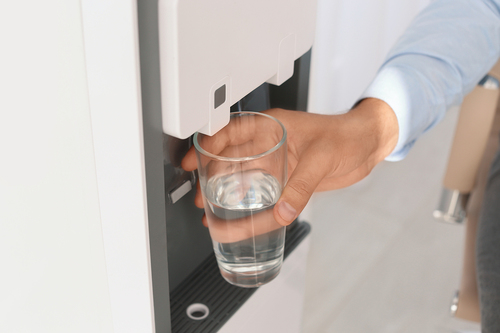 Glasgow dental hospital workers’ have voiced their fury as NHS bosses have banned water coolers over health risks, according to a report in the Daily Record. Employees say the only safe drinking water is now on the second floor. Staff at the hospital have accused NHS Greater Glasgow and Clyde of leaving them ‘hot and bothered’ because of the water cooler ban.

Staff at the nine-storey building say the only safe drinking water is on the second floor, which means that oral cancer patients being treated on the seventh floor would have to climb five floors after accessing the only available tap. Employees, who are also banned from taking their own drinks to patient areas, have to leave their work stations just to get a drink.

A source  told the newspaper: “We were told removing the water coolers was about health and safety but I think it was because they were too expensive. The taps in the hospital aren’t suitable to drink. The building is huge so, for anyone on the upper floors, it’s just not practical.” The source also told how workers are forbidden from taking their own water bottles into clinics due to infection control.

Glasgow Dental Hospital and School is the leading centre for specialist oral health care, education and research in Scotland. It is where students from Glasgow University complete their training and is also a specialist treatment centre for complex cases. The announcement about drinking water was made verbally to staff earlier this month. They were told to expect an email confirming the decision.

Matt McLaughlin, Unison regional organiser, said: “The NHS claims to be an employer that cares about the welfare of its staff. But how can that be the case when you have to climb sets of stairs to get a drink of water? It’s ridiculous.”

NHS Glasgow said: “Guidance is being issued nationally that bottled water coolers should not be used in NHS Scotland healthcare premises. There is potential for bacteria in the nozzle and the water bottle if not routinely used, which could pose an infection risk to patients. Patients and staff will have access to drinking water from ward kitchens or suitably assessed plumbed-in water coolers.”