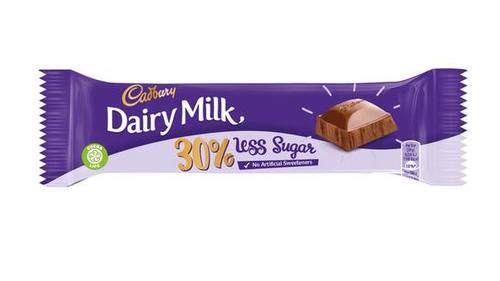 Starbucks, Costa and McDonald’s are selling iced coffees with two days’ worth of sugar and campaigners want the ’sugar tax’ to cover coffee shops too. But brands say their sugary creations are just an ’occasional treat’. Meanwhile a new version of the Cadbury Dairy Milk bar containing 30% less sugar has gone on sale as part of industry efforts to reduce obesity.

High street coffee chains are serving iced drinks laced with up to 16 teaspoons of sugar. A Starbucks large Strawberry Donut Frappuccino has 66.4 grams of sugar – and 593 calories. The recommended daily sugar intake for adults is 30g.

Costa Coffee’s Salted Caramel Crunch Frostino served with whole milk has 60.8g – though that will be cut to 35g. Cafe Nero’s Espresso and Caramel Frappe Creme has 57.g, while McDonald’s Millionaire’s Iced Frappe is loaded with 42g.

Nutritionist Katharine Jenner, of the Action on Sugar pressure group, said: “These flavoured iced drinks, which are laden with an unbelievable amount of hidden sugar and calories, should be an occasional treat and not an everyday drink. It’s shocking to see some contain more sugar than seven actual jam doughnuts.

She continued: “Often these drinks are accompanied by a high sugar and fat snack and so it’s not surprising that we have the highest rate of obesity in Europe. Coffee shop chains must immediately reduce the amount of sugar in these drinks, improve their labelling and stop selling the extra-large serving sizes.”

The British Dental Association said: “The BDA believes the Government has a clear duty to send the strongest possible signal to the food industry, fast food outlets and coffee house giants, that while added sugar might be helping their sales, it’s hurting their customers. These coffee and fast food giants should be weaning us of our addiction to sugar instead of pushing drinks to maximise the dose.”

The chains said the drinks are an occasional treat, sugar levels are reviewed, nutritional information is displayed – and healthier alternatives are on sale.

Caffè Nero said: “Since 2017 we have reduced the sugar across our iced coffee range by over 30%. The Espresso and Caramel Frappe Crème is just one drink from our premium coffee menu, and while it is intended to be a treat, we have reduced the amount of sugar in it specifically by over 20%. All our drink innovation is aimed at continuously reducing the sugar in our drinks, both in our existing and future ranges.”

However, prime minister Boris Johnson, said during his election campaign that he wants to revisit and potentially reverse the tax on sugary drinks – and put the brakes on moves to extend it.

A new version of the Cadbury Dairy Milk bar containing 30% less sugar has gone on sale as part of industry efforts to respond to the obesity crisis. Cadbury owner Mondelez International has described the new bar as the “most significant innovation in the brand’s history” amid similar sugar reduction plans for other lines such as Oreo and Maynards Bassetts Wine Gums and Jelly Babies products. The new Dairy Milk bar sits alongside the original on shelves and offers consumers greater choice and help to manage their sugar intake, the company said.

Some of the sugar has been replaced with fibre to maintain the original’s structure and texture, but Mondelez has described the taste of the new bar as “incredibly similar”. That said, the calorie content remains similar between the two bars, although the sugar content has dropped from 56g per 100g in the original bar to 39g per 100g in the new version.