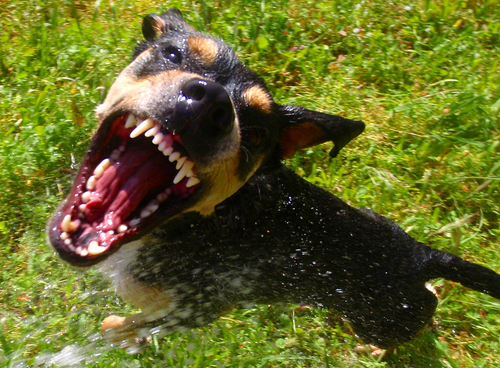 Dentist Aileen Hopkins has been struck off after one of her three dogs, which she kept at her surgery, bit an inspector’s leg. A GDC report said: ‘Two of the dogs were aggressive and staff told us that they do not like people.” All three were found under the reception desk as officials probed 57 complaints about safety and hygiene at the South Way Surgery in Newhaven, East Sussex.

Ms Hopkins, who is in her seventies and has owned the South Way Surgery since 1988, has now been struck off after failing “to protect staff and patients from the risks of the spread of infection and injury”, according to a GDC report that cited “clear evidence of extraordinary carelessness and chaos”. Inspectors had raised 57 “matters requiring attention” but Ms Hopkins dismissed concerns as “nit-picky”.

Other issues included the dentist taking “unwrapped instruments from the storage trolley drawers during a patient’s treatment without changing gloves which had been in the patient’s mouth”. She had also “failed to ensure the safety of patients by the use of materials that had passed their expiry date”.

Between 2014 and 2015 she used the drug endomethasone in root canal fillings despite the fact that it was found to be “potentially hazardous to health” and withdrawn in 2010. The report added that instruments were stored in a “cube of foam which appeared grubby”.

Ms Hopkins had also abused patients’ trust and exaggerated the amount of work she had carried out to “prevent a deduction to her payments” from the NHS, the report said. “When her claiming was under investigation she made retrospective amendments to the records in order to give the impression that her claiming was legitimate.”

The GDC said that it was “a sad case” because Ms Hopkins had an “unblemished career of over 40 years” and had “admitted many allegations at the outset” but the findings were deemed too serious to allow her to continue as a registered dentist. The council said: “With regard to your dishonest claiming you had a moral compass set at self-interest before public interest . . . you have put patients at unwarranted risk of harm”.