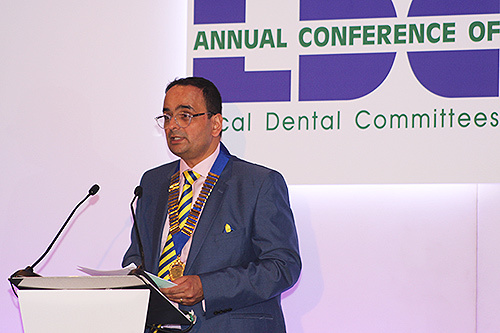 The 2019 Annual Conference of Local Dental Committees took place in Birmingham last week. The motions put forward showed a wide range of dissatisfaction with the NHS and the 2006 contract, as well as low morale and concern about the mental health of dentists. The Conference was also addressed by French dentist Marco Mazevet, economist Stephen Tidman and special advisor, Paul Batchelor.

The 2019 LDC Conference was chaired by Vijay Sudra (Birmingham) and took place in the Birmingham Conference and Events Centre on June 6/7. As in previous years, motions by local dental committees were at the heart of the Conference. This year they showed widespread dissatisfaction with what is happening in dentistry and the stresses under which dentists have to live and work.

They started with calls for the Conference to be more representative of the demographic of the profession and another calling on the BDA and GDPC to embark on ‘robust diversity monitoring’. These were followed by motions calling on more support, including mental health support, for dentists under stress.

The GDC came in for a deal of criticism as did the CQC for the way in which it assesses fees. NHS England, their commissioning role and UDA values came under attack, as did the Department of Health and Social Care for delay in contract reform and patient charges, which sometimes exceeded the UDA value.

The guest speaker on the first day was French dentist, Marco Mazavet, who gave a riveting talk about how they do things across the Channel. Three years ago, the main dentists’ union in France called the strike in protest against a freeze in their tariffs by France’s state health insurer, also calling on the government to pay more.

Today gross spending on dentistry in France is about €11.3bn, which comes out at €300k gross per dentist, with high fees for each item of service. Patients pay for treatment directly, and then claim back from their NHS and from their own personal insurance. Fees include €2300 for F/F dentures, crown and bridge €400 to 500 per unit. Around 30% of French dentists work with no assistance at all, and there are no dental hygienists.

On the second day, economist Stephen Tidman gave an entertaining commentary of a series of graphs exposing the massive drop in earnings, with large increases in expenses while income has been reduced in real terms. He also pointed out that this had led to a deterioration in access, due to falling numbers of dental practices.

Speaking last on different payment mechanisms across Europe, special advisor, had the same problems Paul Batchelor warned against assuming that a French or German payment model could be incorporated into the UK NHS. However, all countries had problems with patients demanding more than their Governments were willing to fund. Most either restricted the people eligible for state dentistry and/or the types of treatments available. Almost universally they adopted item of service as a payment method.

Next year Leah Farrell (Northampton) will be in the chair at the Grand Hotel, Brighton on June 4/5 and Stuart Allen (West Penine) is chair-elect.