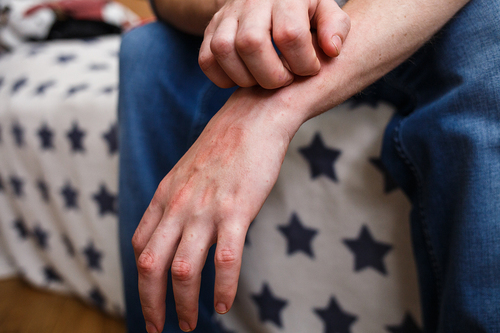 A 54-year-old woman in Japan has developed eczema on her hands and feet because of an allergic reaction to nickel implants. BDA’s scientific adviser, Professor Damien Walmsley, said: ‘Nickel allergy is very common so it is unclear why this woman in Japan had implants/dentures with nickel in them in the first place. Because it is such a common allergy, nickel isn’t used in dentures or implants available in the UK.”

The unnamed woman, who had previously reacted to metallic jewellery, also had bleeding gums, as well as red patches of skin. A dermatologist initially prescribed her an ointment, however, when this failed to relieve her symptoms she visited a metal allergy expert. It was this specialist who made the connection between her red, itchy skin and her dental work. The woman underwent an allergy-patch test at Tokushima University, Japan, which revealed she cannot tolerate nickel.

The woman first developed a rash on her feet when she was 45, which spread to her hands by the time she was 51. The woman underwent a skin-patch test for dental materials in the department for general allergens. The results, published in the journal Clinical Case Reports, came back as extremely positive for nickel.

Once the nickel denture implants were removed and replaced, her symptoms improved initially. However, she reported a relapse four months later. The patient’s condition improved without treatment, leading the report’s authors to believe she may have come into contact with another unknown allergen.

Dr Emma Wedgeworth, consultant dermatologist and British Skin Foundation spokesperson, said: ‘Nickel is the most common contact allergies that we see. Often this presents as an allergy to costume jewellery, watches or belt buckles. Because of its reactivity, nickel is not generally used in medical or dental implants.’