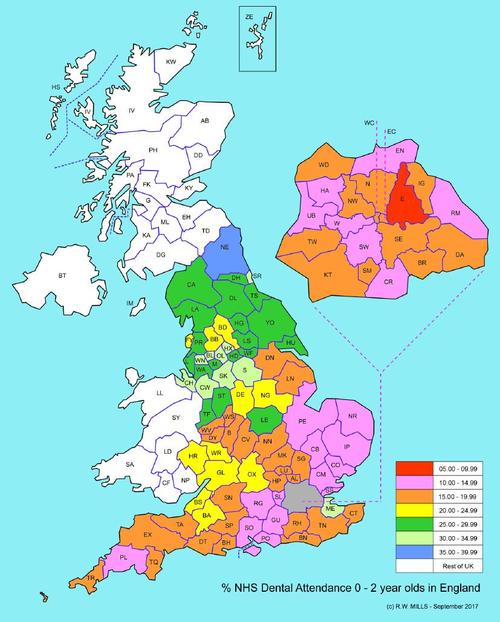 A new map of the UK which depicts levels of NHS dental access for children aged two and under has been created for the first time by the British Society of Paediatric Dentistry (BSPD). The map has been drawn up to coincide with the national launch of Dental Check by One.The data highlights the challenges that lie ahead in raising public awareness of this important milestone in children’s oral health.

Based around the most recent figures released by NHS Digital, the map depicts a North South divide in terms of access - a young child in the North is more than twice as likely to have been taken to see an NHS dentist before the age of two than in parts of the South.

While decay levels in young children are generally worse in the North, this data suggest early access is generally better. For instance, in the Manchester and Leicester areas and large parts of Yorkshire, between 25 and 30% of children aged 2 and under have seen a dentist. Meanwhile, parts of Surrey, Berkshire and Hampshire have as few as 10-15% of children aged two and under accessing an NHS dentist. The part of the country with the highest access levels is Tyneside, where 35-40% of 0-2 year old children saw an NHS dentist in the last year.

Claire Stevens commented: “While this map shows the work that needs to be done, it also shows that improvements can be made when we all work together. It highlights the significant effort already made in the North of England by the dental profession to give access to children from an early age. We have had the worst decay levels in children for years but now access is improving. What we don’t want is for the South of England to be left behind.”

“Concerted efforts need to be made so that as a Society, children’s oral health is a priority and as important as getting registered with a doctor. We would like our Dental Check by One campaign to become a benchmark for a Society which values the oral health of its children.”