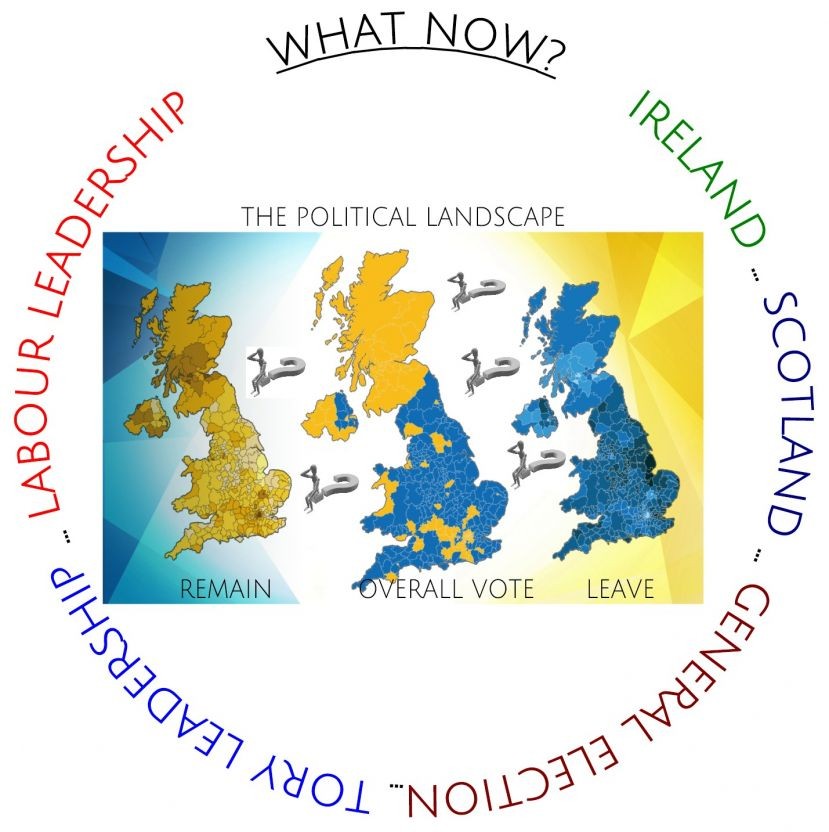 So…
Two weeks after our vote, give or take and it has been an interesting period to put it mildly.
If you voted Leave, it has been quite hard to lean on the positive, but that is changing. The FTSE 100 is back up, the ‘250 is trailing but improving, and while the Pound has taken a hit, many would argue that has been a trend waiting to happen. Despite Mr Osborne using this week as an excuse to drop his 2020 Deficit promise, the fact is he was a million miles off the mark BEFORE the vote. And then there are the personalities and the power broking.

Non, je ne regrette rien
As a GDP who voted ‘Leave’, do I have regrets? No. Perhaps in future, politicians will take their people seriously instead of overriding our worries with their ‘we know best’ soft speak.
Viz, Mr Cameron, who failed to take Referendum matter seriously enough to have a plan in place, it appears. Similarly, I am surprised to say, the Leave leadership who I suspect were as surprised as the PM that the vote went 52%:48%
I did suggest that it would be a revolution and I do think that is exactly what has happened. About time too, many might suggest.

So what has changed?
Nothing, in the next two years and in reality some greater time than that actually changes. We remain in the EU bound by EU Treaties and Law, making our payments and presumably supplying our MEPs
Now call me cynical.
No sooner had the count been completed than the EU declared that Mr Cameron’s ‘EU Deal’ negotiated in February was declared invalid and was withdrawn! So much for the EU being on Mr Cameron’s side.
Is it me? The EU cannot wait to be shot of us anyway. They have been waiting for this to happen for years.
Where were the ‘Remain’ MEPs during the Referendum campaign? Where were the EU Officials, doing a Grand Tour to report what they the EU does do for us? Quite.
Of course, there has been a huge amount of posturing, and superior sounding comment made by all parties. But the dust is slowly starting to settle and realpolitik is starting to become the accepted wisdom.
The chase for the top job in the Tory party is underway; surely a Brexiteer has to take the job?

The outlook for Labour is unclear as I write this, it appearing that Mr Corbyn feels he does not need the Parliamentary Labour Party on board for him to have another go at winning the leadership.
Just when we need a strong Opposition, they decide to go to the beach!!

That is not a circle that needs squaring – that is a complex multi axis movement joint with a multitude of ways to be set, and this needs arranging BEFORE Article 50 can be invoked. An inclusive approach by the next PM will be critical.

It is my opinion that the result of the referendum, being notable but NOT a mandate, is only a start to such a process, and we are simply not there yet.

It is my opinion that Mr Cameron was mistaken not to create some strong ground rules for the Referendum, in particular to the nature of the need for a vote of in excess of 50% of the Electorate. In any other Committee the world over, that vote was inconclusive enough for the Chairman [ie Mr Cameron] to place his casting vote for the ante status quo.
Burt what is done has been done. What should not happen now is that there should be a rush to make more political mistakes.

Better preparation, and a proper mandate
Despite what has been suggested only today [Sunday 3rd] by Mrs May, there must surely be a General Election to restock Parliament with MPs based upon a final Leave or Remain campaign, before Article 50 can justifiably be invoked. I say that as someone who voted Leave.
The biggest challenge now is for a leader of quality to unite the country in its way forwards. If Mrs Theresa May is the bookies favourite, and given Tory party leadership campaign history of old, Mrs Andrea Leadsom is a likely bet.
These are by all measure the most extraordinary times in which we live.

Hi ho, Hi ho, it's off to work we go ...
And yet tomorrow, we all go off and drill, fill and bill. Nothing changes, except the mood and the strangely opaque vacuum that is the political parties we see around us.
If the past two weeks have been a Political revolution, we must be careful not to cause a Geographic revolution by poor leadership and ill thought out ways forwards.
The leadership elections various at least buy everyone some time, despite what our huffy and impatient EU Leaders might suggest.
The summer vacations could not come at a better time, to allow everyone to take a deep breath.
Leave? What, now? No, in about 3 years time - perhaps even at the 2020 Election time?

The Autumn is when the real work begins.

http://audiovisual.europarl.europa.eu/Page.aspx?id=2885
MEPs call for swift Brexit
Top Story - 28-06-2016
Official visit of the President of the European Parliament in London. A general view of the EPIO London, Europe House on June 18, 2015 where the President of the European Parliament Martin SCHULZ today visited and gave interviews with selected journalists. UK-European Flags