Clearly - an Election with promise 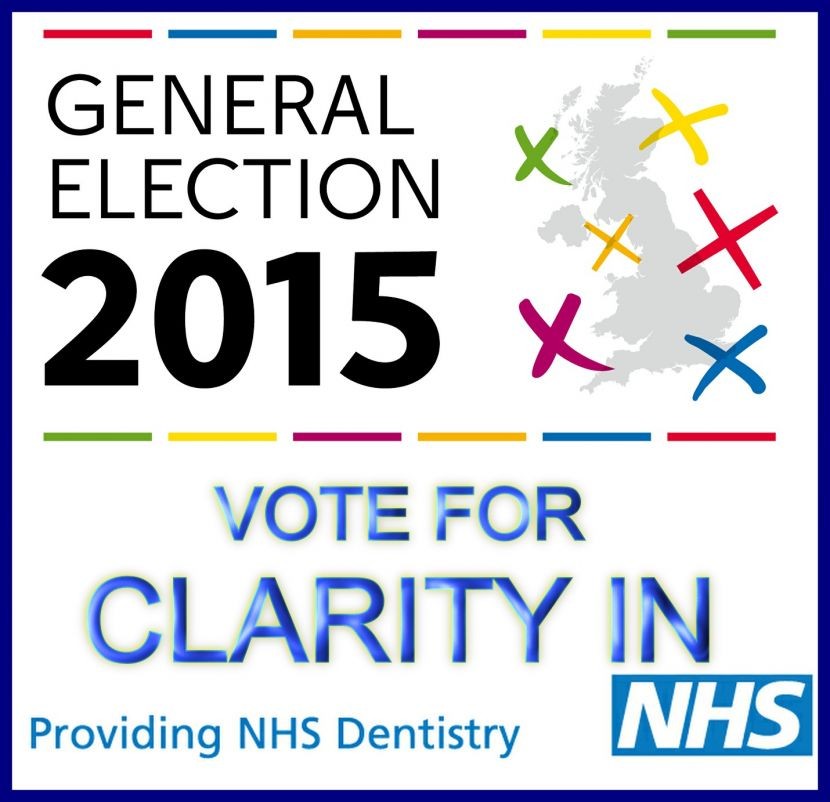 The Clock is Ticking

As of writing, there are about 30 odd days to go to the UK General Election [1] and politics may have changed for ever. The 2-party system may well be broken. It seems likely that the smaller parties will have a relatively huge amount of influence over the eventual policies of the Government that emerges. If Proportional Representation had no role to play in “First Past The Post”, it perhaps does under a mixed multi-party system of coalition where FPTP does not produce a clear Government.  A clear outcome is … well, far from clear. I sense a theme I might return to.

Who remembers the HSC?

Until then of course, we are in the frenetic work up to Election Day across the UK, allied to significant numbers of local elections are due to take place on 7th May.[2] Parliament dissolved of course at the end of March. The Health Select Committee report of the GDC Accountability Hearing will now have to be signed off under the new Government.  Wouldn’t you just love to know what’s in the draft that no doubt sits in a pending tray somewhere?  You can never get a decent leak when you want one! For those of you with short memories in Wimpole Street, it was clear the HSC were collectively unimpressed with the performance of certain executives.

Many Dentists and Dental Professionals play their part in local communities and will have local or national agendas of their own. To all of you, the very best of luck. It’s a busy time.  Stay focussed and may the votes go your way.

Indeed in the GDPUK forum we have our very own blogger Dr Pramod Subbaraman [3] who is a parliamentary candidate for the Liberal Democrat party in Edinburgh South. Scotland of course are still vibrant in their political engagement after the 2014 independence referendum. Sir, we wish you well.  Ironically, if present polls are to be believed, the Independence agenda re-emerge after the election because of the influence of an enlarged Scottish National Party in the House of Commons.

More wet fingered dentists in top level politics is a positive process – it can only help the cause of the nation’s Oral health and ensure that the dental and oral health inequalities rise up the political agenda.  There is a sense of “Rome burning” about the facts on the ground of GA Admissions for children for surgical dentistry [4] while the Department of Health and its mouthpieces at NHS England assure one and all that the system of UDA related access  has clearly been a big success, broadly speaking. I really must get a new pair of hindsight-o-scopes.

You ARE political influence

But imagine you are standing around one day in your local market place and the candidates for your local seat are canvassing your support.  You were planning to “do you bit for the profession” and therefore plan to ask one question.

What should it be?

What would swing it for you if a candidate were to ask you for their vote?

Let me take you back to a previous blog in which I raised a “Trumpet Call for Clarity of the Deal”.[5]  In it I suggested the GDC might take this role on and demand clear rules on what dental care is available under the NHS.  For those who are interested, I did write to the Chairman of the GDC and he delegated his reply that “It was not their job”. Too busy counting the FtP hearings, I suspect!

The consumer organisation Which? [6] and the Office of Fair Trading [7] tear their hair out over the constant complaint that patients never know what’s available under the NHS and what’s not . Report after report is critical – and yet – this strange fudge is NOT of the dentists’ making.

We did not choose this system or the lack of clarity.

The DH chose this. It is the Department of Health who seem content to see dentists accused of misleading patients.  What could their motive possibly be?  Surely not to deflect eyes and attention away from the other concerns over Government funding and management of oral health?

It is patently wrong that every individual dentist should decide what constitutes ‘need’ on a one by one process with every single patient.  How can anyone with half a political brain even remotely justify it?

The new Prototype Contracts are being rolled out at “Pilot” level and still there is no clarity.  The now retired CDO was on record as saying it was not required as part of the new contracts. We can but hope that the new incumbent will see sense and change this unsustainable approach.

The future of dental practice in this country will depend on the success of mixed practice.

The ability to fund privately some dental care alongside an NHS funded element is critical to the small business that is dentistry. Multiple strings of income may well be the ONLY reason that many practices will continue to subsidise the State offering for the benefit of their patients.

But there have to be clear rules. At the moment there are NO rules.  In fact it is so ridiculous at the moment that the rules appear to be written only when the patient complains. At that point the GDC seem to think that investing in your London Day Care might be a jolly good use of funds.

If McEnroe had been a dentist ...

Our old ranting tennis star John McEnroe would have had something to say.  “You cannot be serious” [8]

Otherwise there is a great risk that the GDC call you to order at an FtP hearing should the patient complain that you applied too harsh a judgement of NHS “need”.

So the one question, I put to you, that you should raise with your candidate who asks for your vote is

“Will you ensure Clarity of NHS Dental Treatment?”

Our politicians need to look at dentistry through the patients eye’s, not through the upturned bottle lens that the Department of Health use.

At present 22000 dentists apply different rules across 20 patients per day – because that is what the DH require.

That’s half a million confused patients per day

Ask them:  Will you put a stop to the confusion?  Will you provide absolute clarity on what the patient can expect under NHS dental care?

Meanwhile – control that excitement out there.   I am off to watch some paint dry …

“Now, will you be voting Mrs Goggins, open wide, there’s lovely, bring the next one up Nurse …!

Makes a change from talking about the weather and holiday plans. May your Easter break be relaxing and Spring like. The onslaught has yet to come!!

Backup - Protecting all of your data