The GDC "Current state of play" 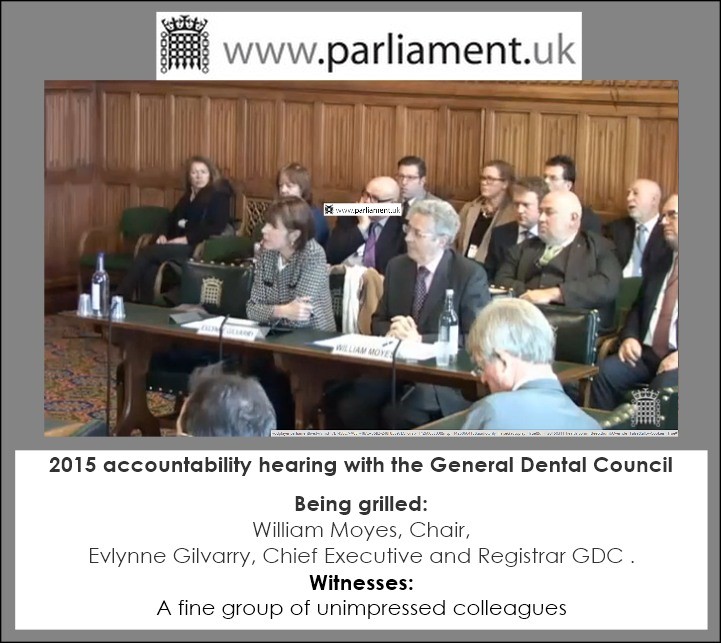 The GDC Current state of play

Last week saw the GDC Accountability Hearing - the link is below. If the state of play of the GDC is anything like England's cricket, thety are back in the pavilion and on a losing wicket again.

As presentations go, it reeked of nervousness bordering on the incompetent. Professional beaurocrats being good at their jobs – which in this case seemed to be to avoid answering questions and to avoid taking responsibility.

I know it is the ultimate in boring TV that may well not come a close second to Jeremy Kyle – but do it, people. I  strongly suggest you watch it. In fact why not mail me privately and I will send you a vCPD Certificate for 2 hours.

Answer the question, if you please Dr Moyes

It started dramatically as Dr Moyes seemed ill prepared to answer the first question directly much to the annoyance of HSC Chair Dr Sarah Woolaston. Dr Woolaston is of course medically trained. Dr Moyes’s doctorate in Theoretical Chemistry may have been of more use if he had majored in The Chemistry of Body Language, whether from in front from the MPs or indeed from behind, where a motley commoners jury of his dental peers had gathered.

Given that on appointment he was nice kindly “Bill” I do wonder if he has started using his proper title to gain some presence in the company of those he seeks to lead?

The state of play with FtP

If there was one line of questioning that caught my eye, it was Rosie Cooper MP “What is the current state of play with respect to FtP?” she asked time and again.

She drilled deep on the state of FtP numbers. Persistent as she was Ms Gilvarry simply did not know the answer. It was stark, and if it had been a job interview, she lost the job at that point.

So I urge you to watch this report.

By watching this select Committee meeting you will learn:

For those of you who do not worry about the GDC in a resigned sort of manner, move along now, there is nothing for you here.

For those of you who like use wonder at this broken regulator, this House of Commons TV presentation is critical watching.

So what is the GDC current state of play?

After an admitted tough year in 2014, my advice is not to place your bet on a proven level of improvement just yet

The future for the Chief Executive looks at best in the balance.

The future of the GDC?

I think that will be a subject for a future Parliament – with 50 Shades of Grey Electioneering upon us, the time is lost and this matter is deferred until the next Accountability Hearing.

For me … it’s that contract with NHS’s National Clinical Assessment Service that catches my eye. Contract?

Now there’s a regulator that has crept under the radar.  As old fighter pilots used to be trained, "Check your Six" because you need to CYA