An open goal for GDPC? 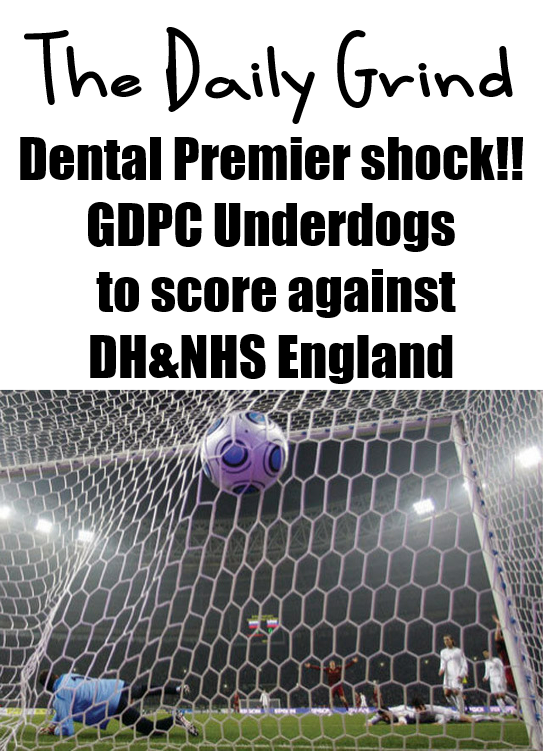 The season has started ...

Autumn has arrived, as has the rain.  Time to close those curtains a while, light the fire and catch up with reading maybe?  The fall is with us and that refer’s to Man U’s fortunes ….

Recently publicity should not have escaped your notice. Barely a week has passed since Public Health England, under the leadership of Dr Sue Gregory & Dr Sandra White went public on what many of us have known for a while.

This is the first national survey of the oral health of 3 year old children in England.

Well that’s two scandals in consecutive soundbites– firstly the ignorance of the problem and secondly the lack of enquiring minds in the first place. What exactly have the DH been doing with taxpayers money might one ask?

The state of children’s teeth is now officially and very publicly worrying [1]. It was headline news on the BBC and even took lead coverage in the "Today" priogramme.  The Public Health England report is found via the at the PHE website [2]

The Guardian highlighted the GA Admissions scandal in the early summer. [3]. This is quoted fromn The Guardian:

Now it seems to me that Dr Cockcroft has wilfully presided over a collapse in children’s dental care with the 2006 contract and simply failed to undertake any attempt to resolve the matter.  And believe me, he has been told many times.

We are to be thankful to Dr Gregory for her persistence in examining the problem. One wonders if there is a fundamental difference of professional approach to the job. On the one hand, Dr Cockcroft, riding the Dept of Health Fiscal Horse called Austerity, and on the other Dr Gregory’s role demonstrating true caring about the problem?

To any outsider there is a self-evident split, nay a cavernous gulf, between the opinions of the CDO England and the Head of Public Health England.

The rumours of efficiency drives allied to prototypes of Contract Reform abound. The GDPC is playing its cards close to its chest, whether rightly or wrongly. I for one think that they need to empower the whole profession with openness and transparency to call their MPs to account. Closed doors are a defunct way of acting as the profession's negotiators

What Sue Gregory has done, whether by intent or not, is give the GDPC an Open Goal to aim for!

If ever there is a problem that requires proper funding for dentists and their teams to work effectively, this is it.

The DH are now out on a limb, Dr Cockcroft has proved himself an anachronism, and Public Health England under Dr Sue Gregory has given reason and energy to the GDPCs position.

The GDPC must make their case without fail, and without shrinking from what can now be described openly as a 21st Century scandal of gargantuan proportions.

Like all football matches, the GDPC need us cheering them on - please open your doors, GDPC, and tell us your strategy. Let us know who is playing where, keep your fans on side.

Children’s dentistry in General Dental Practice is in a mess, and it is Dr Cockcroft and his political masters who shoulder the responsibility.

But it is dentists who can deliver the solution.

The GDPC know what they have to do now for negotiating a rejuvenated Contract Package and with it money to solve the scandalous problem of children’s teeth.

The result should be an assured 3 points.

Tags:
Dentistry Dental GDPUK.com
W&H for the latest in technological innovation and...
Share your passion for dentistry with the world