It’s official; dentists are stressed out 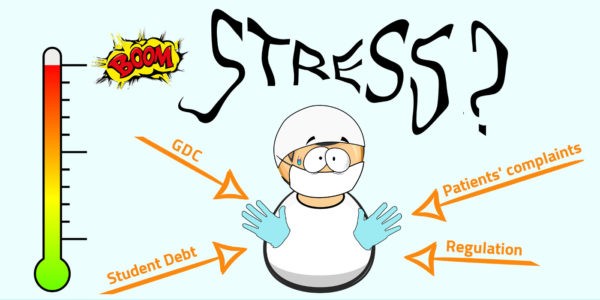 It has long been recognised that dentistry is a stressful profession. It has long appeared in the list of “top ten” most stressful jobs, along with teaching, prison officer and working in the emergency services. But now it is official; the British Dental Association has conducted research into stress levels in the profession. They have found that a shocking 39 per cent of community dentists surveyed and almost half of GDPs reported high levels of stress. This is compared to an average of around 15 per cent for all British workers.

High levels of stress can have a very negative impact on the running of any dental practice. Ensuring staff are happy and relatively stress free, will lead to better productivity and higher morale in your workforce. However, there are additional pitfalls to ignoring staff stress levels as work related stress can lead to a claim being issued against the practice for damages.

The BDA’s Evidence to the Review Body on Doctors’ and Dentists’ Remuneration for 2017/18  found that 51% of the dental profession would not recommend a career in dentistry. The same report found that both practice owners and associates considered their morale to be ‘low’ or ‘very low’ at 29 per cent and 32 per cent respectively.

In response the BDA is undertaking research on dentists’ well-being at work and why they experience ‘burnout’, but this does not help you tackle the problem in your practice now.

According to the Government stress is a reaction to a person’s circumstances and surroundings. It is not an illness of itself but often causes other illnesses. Its effects are shown in a number of different ways, both physical and mental. For example, lack of concentration, sleeplessness, low mood, susceptibility to colds/flu, skin irritations, the list goes on.

It is important to remember that there is a difference between pressure and stress. Pressure at work can be healthy, as can some level of stress. However, too much pressure can cause stress to become harmful to health and employees will react differently to the pressures they face.

What duty does a practice principal owe to their workforce?

Employers have a common law duty to take reasonable care of the health and safety of their employees. If an employer breaches that duty, and that breach causes the employee a personal injury, the employee can bring a claim for damages.

A personal injury can include stress. However, the injury must be a medically recognisable psychiatric injury. Therefore, not all cases of work related stress will give rise to a claim for damages.

In order to succeed in such a claim, an employee will need to prove the following:

2.      That the breach caused the employee injury;

It should be noted that whilst we have used the phrase ‘employee’ above, the protection will extend to workers and could even extend to a self-employed associate, if they can show that they are owed a duty of care by the practice.

Hatton v Sutherland is the leading case in personal injury claims relating to stress at work. The court re-visited the test in Easton v B&Q and also gave some practical advice in dealing with such cases.

Mr Easton was a manager at a B&Q store. Prior to this he had worked as a manager for 10 years at a large supermarket chain. Mr Easton alleged that as a result of B&Q’s breaches of the duty of care he had suffered work related stress. Mr Easton further claimed that the way his return to work was handled, following a period of stress related ill health, caused a relapse of his condition.

There was no dispute from B&Q that Mr Easton had suffered a psychiatric illness. The issue in this case was whether the injury was foreseeable.

The key findings of the court were as follows:

The court recognised that Mr Easton’s condition affected his perception of the events that had taken place. However, the court found Mr Easton had persuaded himself that a promotion was in line and this could not therefore be a breach of duty. The court commented that employees should try to look at events objectively.

Tip: employers who can show they have acted fairly and in line with any policies are unlikely to be in breach of the duty of care. If an employee has taken exception to a decision you have made, try sitting them down and clarifying why it is needed, rather than saying ‘I am the boss, my decision is final’.

The court found that the effects of this were not as dramatic as Mr Easton made out and that Mr Easton failed to make any complaints about this to his employer at the time.

Tip: An employer cannot be expected to foresee an injury if it is not aware of the concerns the employee has to begin with. However, if a member of staff raises any complaints with you, you should take them seriously and deal with them accordingly, even if that means explaining to the employee why their concerns are invalid.

3. Rejection of a grievance

Although not in fact argued by Mr Easton, the Court took the opportunity to clarify that when an employer rejects a grievance, as long as a proper procedure was followed, this cannot be a breach of duty simply because the employee does not feel justice has been served.

Tip: this is often an issue for employers. Employees not agreeing with a grievance outcome and feeling they have been dealt an injustice. However, as long as you have properly investigated the issues and provided a reasoned response to the same, it is unlikely you will be criticised.

4. No knowledge of stress

The court found that B&Q had no knowledge that Mr Easton was suffering from stress. The court took into account Mr Easton’s previous role as manager for a large supermarket chain and concluded that he was therefore capable of doing the role. In the absence of Mr Easton informing B&Q of his concerns, B&Q were not on notice of any issues.

Tip: An employer is entitled to take what his employee tells him at face value, unless there is good reason to think to the contrary. Therefore unless an employee reports to you they are feeling stressed, you do not need to take action. However, if they do you should take heed and ensure you have dealt with any concerns the employee raises.

Whilst work related stress should be taken seriously, employees need to show that the employer did know, or should have known, that their actions would cause an injury (the foreseeability test) in order to succeed in a claim. Most claims fail on this basis, as it is a high threshold.  A common misunderstanding by employees when arguing a claim for personal injury is that simply because they have suffered from work related stress, that the employer must be liable.

Irrespective of this, as an employer you will want to ensure your staff are as happy and stress free as possible. There are a number of ways you can do this:

2.       Having an ‘open door’ culture so employees feel safe talking to you;

3.       Undertaking staff meetings so staff feel part of the practice;

4.       Ensuring changes to procedures are properly explained before they are implemented, to help staff understand the reasons for them.

Also remember that whilst an employee may not have a stress at work claim, they may be able to bring claims for disability discrimination or harassment, unfair or constrictive dismissal or breaches of health and safety requirements.

If you have queries regarding the content of this article please contact Laura Pearce, Senior Solicitor, on 020 7388 1658 or by email at This email address is being protected from spambots. You need JavaScript enabled to view it..