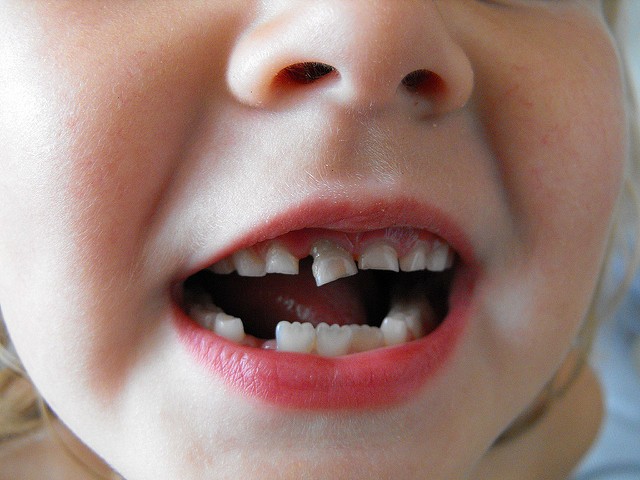 It’s deeply ironic that in an age when many of us could live to a 100 and all but the most serious diseases can be treated, some people are clearly missing out. As a mother of two and former practice manager it particularly disturbs me to see children with bad teeth. The numbers are staggering. According to the Health & Social Care Information Centre recent report NHS Outcomes Framework for England, tooth extractions due to decay in children admitted as inpatients to hospital, aged 10 years and under were at the rate of 462.2 per 100,000 population in 2014/15. That’s about one in every 216 children.

What does Google say?

To attempt to answer the question posed in the title of this blog I decided to post it into Google. The result was many references to information on children’s oral health and an article in the Daily Mail with the headline: ‘The lazy middle-class parents who don’t teach children to brush their teeth: By a teacher who’s seen the horrific consequences’.

The article claimed that parents were too busy to show the children how to brush their teeth and when the teacher opened a pack of tiny toothbrushes and tubes of toothpaste in her class of four-year-olds ‘the children were saucer-eyed with curiosity.’

An article on parents.com claims: ‘Many parents are surprised to learn that kids need help brushing their teeth until at least age 6. Young children simply don't have the manual dexterity to do the job well.’

In an article about this guidance in The Telegraph, Joyce Robins from Patient Concern was quoted as saying: “Nice has often been accused of pushing nanny state measures but this is more like a ‘supernanny state’.

“What will they suggest next, that parents can drop their children off at school naked and unwashed, and leave the state to step in and do the rest?”

There is an answer

So if parents are too lazy, too ignorant, too impoverished, living in area of deprivation or are combination of some of these factors, what is to be done? The answer comes from the USA. Tegwyn H Brickhouse D.D.S., Ph.D. Department chair, research director and associate professor in Pediatric Dentistry at the Virginia Commonwealth University was the lead author of a paper presented to the IADR/AADR/CADR conference in March 2013. In it she wrote about a study into a scheme to decrease the number of low-income children in the Roanoke Valley with long term dental disease. The Child Health Investment Partnership of Roanoke Valley (CHIP) provides in-home preventive oral health services designated as the Begin with a Grin Program. The paper states: ‘In the context of a home visit, Community Health Nurses (CHNs) and Pediatric Nurse Practitioner (PNP) apply fluoride dental varnish (FV) to the teeth of CHIP-enrolled children from tooth eruption to 36 months. They educate the caregiver in preventing tooth decay and the importance of a dental home.’

The study found that: ‘Two applications of FV to the child’s teeth significantly reduced the likelihood of having any decay.’ The conclusions were: ‘Home visiting programs such as CHIP’s Begin with a Grin serves as a model to improve the oral health of high-risk children. The CHIP program provides an innovative solution for providing oral health care to the nation’s medically underserved populations.’

NHS Choices states: ‘From the age of three, children should be offered fluoride varnish application at least twice a year. Younger children may also be offered this treatment if your dentist thinks they need it.’

That presupposes a parent takes their child to a dentist. The CHIP Begin with a Grin programme avoids that requirement. However, dental practices would need to be informed when children are born in their area.

Is this something the GDC and NMC (Nursing & Midwifery Council) should be liaising about? Another question seeking an answer…