Challenging a Decision of the GDC Committees 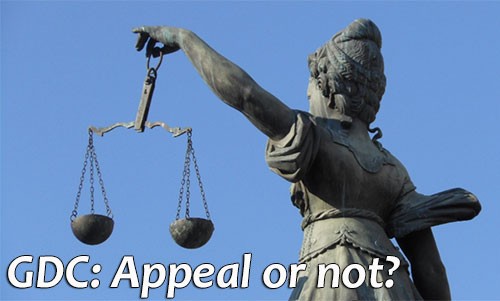 There is a genuine concern amongst the dental community, including within the GDPUK forum, that the Practice Committees are not acting fairly or with common sense when conducting disciplinary proceedings. In December 2015 of the 46 cases heard, 4 dentists were erased, 17 were suspended, 4 were reprimanded and 15 were issued with conditions.

I am sure you all remember the Professional Conduct Committee’s damning comments of the GDC’s conduct during the Fitness to Practice investigation of Dr Singh on 11th May 2015. If not, you can read about it here. Because of the appalling conduct of the GDC in that case, the hearing was abandoned as a result of an application by Dr Singh’s legal representative. The purpose of the legal application made was to stop the unfair process, and to allow a fairer more transparent hearing to follow. However, the case is still yet to be re-listed for hearing.

Although a positive result for Dr Singh in the short term, it did not bring an end to the matter for him. The question now is has he just delayed the inevitable?

So what steps can you take if you disagree with the decision of the Fitness to Practice committee?

Any appeal against a decision of the Practice Committee must be made within 28 days of the original decision to the High Court. The grounds on which you can appeal the decision are:

2.       That there was a procedural or other irregularity.

You can also appeal decisions of the Interim Orders Committee on one of the above grounds; again any appeal must be within 28 days.

The High Court is completely independent of the GDC; it is therefore not afraid to overturn the Practice Committee’s decisions.

The High Court has made it clear in a number of judgments that the purpose of Fitness to Practice hearings is not to punish the practitioner for past misgivings but to protect the public. In the decision of the High Court in the case of Cohen v. General Medical Council (2008), the judge stated it was not inherent that every case of misconduct must automatically mean the practitioner’s fitness to practice is impaired. However, it appears from recent decisions that perhaps the Practice Committees are losing sight of this principle.

In the recent case of Professional Standards Authority (PSA) v (1) General Medical Council (2) Uppal [2015], the GMC decided not to impose a sanction on Dr Uppal even though she had accepted the allegation of dishonesty. The PSA appealed the decision on the basis it was too lenient. They argued that dishonesty must automatically amount to impairment. The court disagreed and accepted the GMC’s findings that this was an isolated incident and therefore there was no impairment of Dr Uppal’s fitness to practice.

If you think you have been treated unfairly at a hearing, or that the punishment laid down by the Practice Committee far outweighs the “crime” that has been committed, then it is well worth seeking to appeal.

However, it is essential that you act promptly, as although the High Court does have the power to extend the 28 day time limit, this will only be done in exceptional circumstances.

There is some overlap in the above with the grounds on which a decision can be appealed. However, the court will not consider an application for judicial review until all other avenues have been exhausted.

Bear in mind that irrationality means that the decision of the GDC was so unreasonable that no reasonable public body would have come to it; an extremely difficult test to overcome. Legitimate expectation is where the public body, by its own acts or statements, is required to act in a certain way.

So in conclusion there is some light at the end of the tunnel. Whilst it is clearly a stressful and daunting experience having a complaint raised against you, the decisions of the GDC can be challenged in the courts.

Indemnity and insurance companies should fund an appeal subject to meeting the terms of the policy and some may provide funding for an application for judicial review. Remember you do not need to use the ‘panel’ solicitor appointed for you; you have freedom of choice as to your representative.