A varied commentary of what is what in UK dentistry and beyond. Some economics, some tech as well as some futurology.
Print
2 minutes reading time (349 words)
Featured 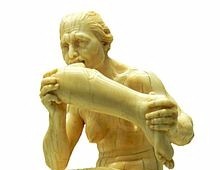 The BDA is eating itself. This has been going on quietly for a few months, since the figures secretly emerged from the membership changes implemented in early summer. News on this topic has been sketchy, the BDA has been trying to keep a lid on it.
There is a battle raging at the BDA, but there is a silence, a purdah from those involved. The membership needs to know, and must be told.

There has been a major shortfall in income, and the organisation has to respond to this, or face dire financial consequences. The PEC met on Tuesday 1st October there has been no press release about this. The GDPC Executive met on Thursday October 3rd. No news from there either. Today [October 4th] the GDPC will be having it's say in London. By then, many more people will be in the know. But the membership should be told what is happening, and what the outcome will be.
On one side, the executive and the PEC has set course to retain the costly premises, and salaries of leading executives, make some cutbacks but carry on with the rest of its functions.
The other side is both concerned and very angry that cuts will be made to frontline services, directly affecting members and that no-one at the centre of the organisation is taking responsibility in the form of resignation. Cuts that may be made to BDA services include many staff redundancies, potentially in more than one wave. Major concerns are that BDA spending on the trades union side of the organisation will be severely cut. In addition, there are whispers that funding to the BDA branches, its true roots, will be cut to zero next year.
My opinion - although decisions were made collectively by boards and committees, the membership plan changes were brought to the fore by a group, and that group should take responsibility.
The membership, in their thousands, continue to subscribe millions of pounds, and the majority chose the simplest membership option, which includes the trades union activity. Therefore my prescription - this part of the BDA's work must not be cut.
Tweet
Tags:
Profession Martin Fallowfield Peter Ward Tony Jacobs dental opinion dental blog BDA Dentistry Dental GDPUK.com
The Complete Compliance Suite - SafeSeen Touch
The Business Side of Dentistry - Andy Sloan