All that's new in the world of dentistry
DEC
13
0

Rearranging the Deckchairs on the Titanic... 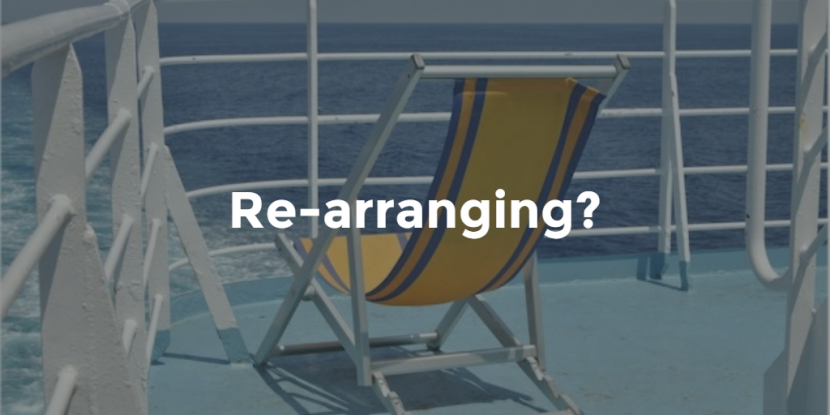 Another New Year rolls towards us with still nothing particularly concrete planned regarding the new new new NHS Dental Contract. Ok, so there are prototypes running, but there doesn't seem to be any actual date that will see the beginning of a brave new world where all things NHS Dentistry will be rosy once again.

Prototypes seems to be the new buzz word rather than pilots, but unlike a pilot flying a new course, a prototype seems to be something cobbled together that might just possibly fly, but then again might not. The British are pioneers at making prototypes actually fly, but usually in the aeronautical sense. For this to happen it involves a degree of advance planning on the drawing boards, before making models, testing them in a wind tunnel, before finally making a version that might actually fly. There are some occasions where a test pilot has taken the front seat in a prototype only to have met a swift end when something has not quite been right with the design. At least the engineers then can go back to the drawing board and hopefully redesign a problem out of the next version.

But this is where the analogy with the NHS prototypes ends. Instead of learning from the mistakes and problems with the prototypes and design out the problem, the DoH apparently just ignore the data they don't like and carry on with the data they do like. All still fuelled by the ubiquitous UDA. Going back to the analogy, this would be like the designing a solar powered plane expected to fly at 600mph where the wings fall off at 500mph and you can only fly it at night. But since it looks really really good and the Government like it, you can get loads of people on board, so they'll order them. Anyhow, if it crashes, the Government will always blame pilot error.

People working in the prototypes seem to have varying experiences; those in the blend A models (having a capitation for all band 1 treatments and claiming band 2 and 3's)  are reporting more issues than those in the Blend B (Both band 1 and 2 as capitation and band 3 to be claimed). But what is being reported generally is that access is going to go down with these new ways of working, whilst it is increasing difficult to keep the capitation numbers to target. Access is the only mantra the DoH have, and whilst they pay lip service to quality outcomes, you can rest assured that the only bit of quality they will be interested in will be how much they can claw back when the quality outcomes can't be met. Some of those in the prototypes don't even know how the quality aspect is being calculated as there don't seem to be figure made available (particularly to associates). Given that this is 10% of the contract value, not having the information on what you are being measured on seems to be a significant problem to me.

Having an entirely capitation based system (which will be what the BDA will try for) is better for practitioners ONLY when you have a government that isn't obsessed with output and not interested in the actual quality. By expecting the practitioners to provide the quality as part of their obligations ethically to their patients, and regulated by the GDC, the DoH can quite happily still place the blame at the door of the individual performers on any contract. Its win-win for them still. Anyone who thinks any new contract will be a dental utopia should probably consider leaving the profession now. Almost all commentators say that there is already little enough time to provide the output expected to meet UDA targets; the new system seems even more geared to allowing practices to struggle to hit the new targets. Even successful prototype practices are struggling with the capitation element, as they need many ore new patients to ensure the targets are boing met, but with no space to treat these often high needs patients until 2 or more months down the line, one must wonder how these increase targets are going to benefit good patient care in the brave new world.

Here is now data that shows the amount of principals in practice is reducing, with the increase in associates being proportional to that. However the change is quite extreme, with something like 83% of dentists now working as associates. This will be the norm in the future in my opinion, as with a downward pressure on the income of dentists generally it will become more and more difficult for associates to begin to invest in a practice of their own. I can see parallels with the optical and legal industries here, and incomes of £30,000 for associates becoming routine. Not only that, with the change in the way the new contract may be calculated, and the 'UBER' ruling recently about when self employed might not actually be self employed, then I can foresee a time in the near future when associates become true employees, with the associated increase in liability the employer then has (national insurances, sick pay etc) to cover reducing the wage structure still further. I am also aware of practices who have had to make members of the team redundant, such as therapists as they cannot make the system work for them due to the economics and logistics that seem to be inherent. Still, that's not going to be the DoH's fault is it? Just the dentists who don't run their practice the way the DoH want them to.

Don't get me wrong though; there will still be some highly entrepreneurial dentists out there who will continue to make a very good income from the NHS, but they will be at the head of larger practices or mini-corporates, and backed either by the fortunes made in this system, family money, or outside investors who can see the business model working. There is nothing actually wrong with this either, because fundamentally dentistry is going to be a service industry in the same way as a mobile phone company is, and you don't see all the employees in that industry getting the same salary as the chief executive. It becomes almost irrelevant that many of the 'fee earners' in dentistry are highly educated individuals supported by a well trained team; dentistry is just another 'widget' producing industry for investors to make a profit out of at some point.

One of the reasons that the profitability of corporate practices has been lower has to be due to the income proportions taken by associates. I have no issue personally with what associates earn, but the days of 50% are long gone in this new world, and probably 35% is more realistic for the future. Many law firms expect their fee earners to generate at least 3 to 4 times their salary in order to justify their continued employment. Only in this way will the corporates become as profitable as they need to be to survive long term, and they know this. Coupled with an increased difficulty in earning the udas if the new contract is like the prototypes, with quality frameworks and increased access, then a downward pressure on the highest cost base that can be influenced is certain. In any dental business of a certain size with associates, then I would be pretty sure that the highest 2 costs will be associate wages and staff wages. Only by controlling this aspect, and in an even harsher manner than previously, will the profitability that is needed for continued business survival start to be produced. How fast this will then follow in the smaller practices which have proportionally higher cost bases due to the lack of bulk buying powers is an academic argument.

To finally top this, the BDA  released a press release in the last week indicating just how poor the morale is within the profession. Although this has been known by the profession since at least the time Sheffield United last won a football trophy, they have now decided to let the public know the blindingly obvious. Once again the BDA's public condemnation of a system has been about as vocal as a mute mouse with a sore throat. It should be front page news that half of the UK's NHS dentists are thinking of leaving the NHS, but I haven't seen it in the papers today, but if it does appear it will be spun against us. I was informed (as I was writing this piece) that the BDA are now threatening legal action against NHS England for the patient charge revenue deductions made due to their interpretation of the 2 month rule. But will they get the spin right when they tell the public? Or will the Daily Mail run the 'Greedy Dentists Sue Cash Strapped NHS for more money' headlines because we haven't got a good PR image? At least the BDA are starting to do something positive, but the message has to be managed to our benefit.

So it remains to actually be seen just what might happen in the brave new world of NHS dentistry. Is morale going to improve, or will the DoH continue the beating of the profession until it does? Will there be more time for the quality that our profession is expected to provide? Will there be the correct funding for a First World service?

Sadly, I think we all know the answers to those questions if we are honest with ourselves.