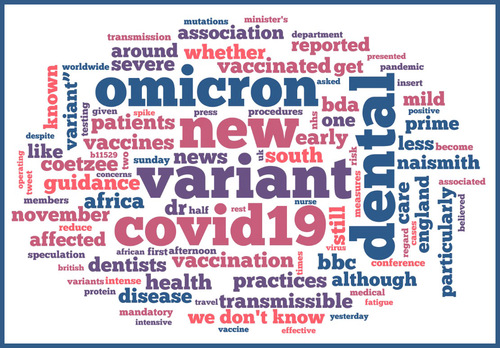 Within hours of dentists receiving new standard operating procedures from the Chief Dental Officer for England, there was widespread speculation on social media as to whether the newly-identified B.1.1.529 (Omicron) variant of  SARS-CoV-2 will be a threat to a return to normality in UK dental practice.

On Sunday morning, the British Dental Association said on the BDA News website “We have sought urgent clarity from officials on the implications for dentists working to new Standard Operating Procedures, following the Prime Minister’s press conference on the new Omicron variant.”

“Given the flexibilities within the SOP we are clear there is nothing to prevent practices from making their own decisions about the approach they adopt, in line with the hierarchy of controls.”

“We have also raised with NHS England officials that the emergence of the Omicron variant is likely to have an impact on NHS delivery and should be a factor in decision-making about contractual thresholds from January 2022.”

Draw your own conclusions with updated dental appendix…https://t.co/7SG358l8ua

Little is known about the Omicron variant at this stage, which was first reported by Dr Angelique Coetzee to the South African vaccine advisory committee on November 13th.

Dr Coetzee, who chairs the South African Medical Association, has said that the patients she has seen have presented with high pulse rates and intense fatigue, but none of her patients had experienced the typical loss of taste or smell previously associated with COVID-19.

Dr Coetzee reported her findings after a family of four had experienced intense fatigue after testing positive for COVID-19.

Dr Coetzee told The Telegraph “’Their symptoms were so different and so mild from those I had treated before.”

The World Health Organisation has called B.1.1.529  ‘A variant of concern’ amidst worldwide worries that it could resist vaccinations and prolong measures taken worldwide to end the two-year pandemic.

The Omicron variant is thought to be potentially more contagious than previous variants, although experts do not yet know if it will cause more or less severe COVID-19 compared to other strains of the virus.

Late yesterday afternoon, BBC News confirmed there had been a third UK case of Omicron identified.

The BBC News wevbsite reported "A third case of the Omicron coronavirus variant has been detected in the UK, the Health Security Agency has said."

"Officials said the case was linked to travel to southern Africa, where the variant was identified, but the individual was no longer in the UK."

This morning, The Telegraph has reported that the Scottish Government has announced that six more cases of the omicron variant have been identified – four in Lanarkshire and two in the Greater Glasgow and Clyde area.

Concerns about the new infective agent prompted Prime Minister Boris Johnson to take swift action after two cases were identified in Nottingham and Brentwood, Essex.  The individuals concerned were believed to have contracted the variant in southern Africa and the cases are said to be ‘linked’ although the nature of the link is not known.

In a press conference on Saturday afternoon Mr Johnson said that face coverings will become compulsory on public transport and in shops from next week, although hospitality venues won’t be affected. Face-covering will still be mandatory for patients visiting healthcare settings.

Face coverings have remained mandatory in clinical settings for patients and visitors since lockdown.

However in recent months mixed messages have resulted in increasing non-compliance.

This is the sort of unambiguous messaging we now require. https://t.co/QFE5l9J49C

But many were concerned about how dentistry would be affected by the potential introduction of new measures on dentistry.

One dental practitioner asked when the “Recent de-escalation of PPE and  fallow times will be reversed?” while some  practitioners are still questioning whether vaccination does reduce transmission, despite evidence presented in the British Medical Journal that it does.

UK scientists  are believed to have first become aware of the new strain on November 23.

The variant is said to have  50 mutations overall and more than 30 on the spike protein. The spike protein is the target of most vaccines and acts as the key that the virus uses to gain access to cells.

BBC News said “Experts in South Africa have said the variant is "very different" to others that have circulated, with concerns that it could be more transmissible but also able to get around parts of the immune system.”

On the Today programme, Prof Naismith said  the variant would "almost certainly" make vaccines less effective, but they would still work to some extent. New drugs to treat Covid-19 would not be affected by the variant.”

BBC News reported “It had not been proven that the variant was more transmissible, but it has mutations consistent with the Delta variant and appeared to spread more quickly than other variants, he said.”

"The travel ban will slow it down," Prof Naismith said. "It will get here but it will give us a few more weeks."

In the light of the forthcoming deadline for mandatory vaccination for frontline health care staff, some dental professionals are still expressing their doubts around the efficacy of the vaccination, particularly with regard to its ability to reduce the transmission of SARS-CoV-2.

Dr John Campbell, a retired nurse teacher and former Accident and Emergency nurse has followed the COVID-19 pandemic closely and reports on it on his popular YouTube channel.

He said yesterday that young people are presenting with moderate to severe disease in Soweto in South Africa.

“So it’s looking like the South Africa experience is saying that you get mild disease if you’ve had two doses of vaccines – very very mile disease in terms of probability - a greater risk if you’ve had one vaccine, and if you’ve had no vaccines at all then I’m afraid it looks like you are at risk for Omicron.”

On Saturday, the Canadian Dental Association issued advice to its members.

It said “The new variant is in circulation around the globe, based on the detection in Europe not associated with travel from South Africa.”

The CDA advised its dental members “Caution is recommended at all times since there are increasing reports of individuals traveling internationally and subsequently testing positive for COVID-19, despite having been vaccinated.”

It also warned  Canadian dentists to “Think locally: be extra cautious in areas of low vaccination rates or where clusters, in general, are reported,” and “Consider monitoring the vaccination status of patients for whom it has been longer than 6 months since their last dose.”

In England, both the Department of Health and OCDO were criticised in 2020 for not providing practices with early guidance, particularly with regard to recommencing services after the dental shutdown.

A brief poll by @DentistGoneBadd on Twitter asked if  early guidance should be given to dental practices by the Department of Health or CDO.

A perhaps unsurprising 40.8% of respondents felt that it was unlikely that they would receive early guidance.

With concerns over the Omicron COVID-19 variant growing, do you think early guidance should be given to dental practices by the Department of Health or Chief Dental Officer?