Dental Corporates and their Responsibilities 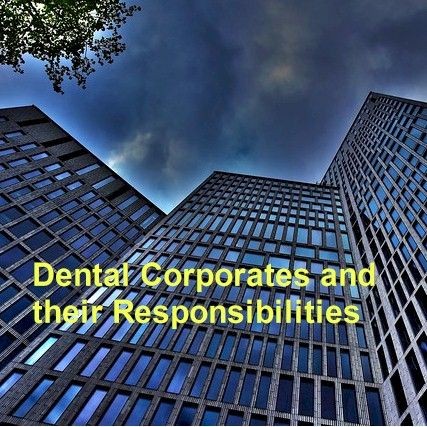 Dental Corporates and their responsibilities

I might start off by actually saying the title of this blog is probably one of the most Oxymoronic I’ve ever thought of, but then that would probably give away the content and the thread of what follows.

However, I don’t really care if it does give away what follows; because I’m sure that many of my readers will understand just where I am coming from and why there needs to be something done about the environment we currently have in UK dentistry.

No-one can deny that corporate dentistry generally is becoming bigger and bigger as the years pass. I can remember the original clamour back in the mid 1990’s to buy the original corporate ‘shell companies’ that were legally able to provide dentistry under the 1921 re-organisation of the profession. I’m not sure anyone who was in practice in those times could have then foreseen the huge growth of the corporate, but the real change came when all practices were allowed to incorporate (as an aside, does any one else think it’s funny how the Dentists Act 1984 allowed this but still can’t work out how to take a monthly direct debit from us instead of an annual payment, but I digress…..). What is true however is that there is a significant amount of dentistry now provided under the auspices of corporate dental companies, of which some of them are quite large players. I will say here; this blog is not about any specific company; I am sure there will be some out there who have good stories to tell. However, there is no doubt that in some corporates in some places and some practices there is a culture that is not good, not healthy, and downright nasty.

Those of you on Facebook may well also be members of the ‘Mental Dental’ page. This is a hugely important page that has become an important outlet for its members to vent their concerns about a multitude of issues affecting them. By simple extrapolation, many of the issues floated here are likely to not just be unique to the original (often anonymous for good reasons) poster, but relevant to other professionals finding themselves in similar positions.

A good many of the posts on this page (and indeed on most dental specific social media groups) seem to revolve around issues that associates are having with their corporates. Whilst I am the first one to consider that there are always two sides to every story, there is also a common theme to nearly all the threads posted. Note that I didn’t actually say “Corporate Employers’ at this stage; but more of this later.

It is apparent that even if you take into account that not all the stories are likely to be entirely balanced, there are a significant amount of associates who are having problems with the working environment of the corporates. From faulty equipment not getting repaired, running out of materials, a lack of clinical freedom in referring, to outright bullying, the same themes come up over and over again. This can’t just be put down to only having one side of the story surely? The fact that these threads appear so often, from so many different contributors shows that there has to be something more behind the threads.

Some of the more concerning posts often involve bullying of associates. From target driven issues, to ‘you make waves and we’ll report you to the GDC’, this seems to often be driven by management teams within the corporate environment. There is NO place for bullying in any environment, and the fact that some people feel that it is acceptable to disguise this as performance management doesn’t make it in any way acceptable.

But how has this environment come about? I’m pretty sure the dental registrants at board level haven’t issued dictats to their managers condoning the bullying of their teams? However, the need to make money for the shareholders means that these directors have to ensure the business is profitable (although there’s another oxymoron – the profitable corporate..) and the ideas discussed at board level eventually filter down to the teams regionally and locally,

This is where the problem lies in my opinion. When the board comes up with an idea, it is down to those below it to implement this, and the board is not necessarily aware of the fine details in how this is done; just how that it needs to be done. It is down to the teams on the ground to implement that desires of the board. How they therefore go about this is part of the problem. With management teams that are often not fellow dentists (or even registrants on occasion), there can be a lack of understanding of how the profession truly works. Yes, these people can be given training in the dental industry, but they may not have the same ethical and moral compass, or even the need to be registered by the GDC, and therefore do NOT know what it means to be a real professional.

When you hear stories of associates raising concerns to management about slack appointment books causing them to not meet their UDA target, to then be shown edited data showing the books are now full, and threatening them with a counter concern about clinical treatment (that the managers know full well can result in a GDC case and a livelihood threatening result), then you have to consider that the whole structure of corporate dentistry needs re-addressing rapidly. This threat has been real, this is not hypothetical, nor fictional.

Now I’m fairly sure most of the REGISTRANT directors of the corporates are very ethical and still have the moral compass that is needed; but they don’t seem to be getting the message down to their teams very well. Whether this is because they are not being heard above the voices of the non-professionals who have no regulator to fear, or whether the management structure is so poor that the message is not getting through I don’t really care. What is certain however is that a good many of these registrant directors seem to be unable, unwilling, or unprepared to step in to deal with the problems that we hear about, otherwise we would stop hearing of them almost on a weekly basis.

Have these directors forgotten they can be held vicariously responsible for negligent acts and omissions? They seem to rely on the self employed status of associates in order to deny all knowledge of the problem. However, it is becoming more and more apparent that the associates who work in these organisations are less and less likely to be seen as truly self employed as a result of various court cases (Pimlico plumbers, UBER, to name but 2), and it is about time that they took their corporate responsibility a lot more seriously than they appear to. I’m sure a few minds would be somewhat more focused on their ultimate responsibilities if a few of them were found to be vicariously liable for a few clinical issues, or taken to an industrial tribunal by a disgruntled associate (which if you believe the stories on social media might not be a small number).

They cannot hide behind the excuses that they don’t know what is going on. There is enough spoken about in the profession about corporate issues that this is about as believable as saying they aren’t aware Elvis is dead. Whenever there is a problem posted on the various groups, I always recommend that the highest level clinical director be notified, rather than the middle management (which is often the source of the problem) in order to ensure the problem lands at the door of a registrant rather than a (sometimes over-promoted) manager. Recruitment seems to rely on the fact that younger registrants often have ludicrous debts to pay, and therefore will end up working for these organisations as they appear to have little other choice.

Registrant directors need to step up and take the responsibility for the mismanagement and bullying that appears to be a problem in their organisations, and deal with it decisively. If this costs money and time then so be it; but if it does it may well show some of corporates for the shallow and non-profitable businesses that they really are. Alternatively, if they don’t act, it’ll show the profession that these people might not have the integrity, ethics, and morals that are required to be members of our profession.

But if the latter is the case, then the GDC should be told. They should ensure that the need to act in the best interests of the patient is drummed into all those registrants who sit on the boards of the corporates. There should be no hiding behind the corporate structure of these businesses and claiming ignorance of the problem. When the majority of the entire profession seems to be aware of the magnitude of problems with some corporates, then the directors cannot feign ignorance.

The elephant (so big its actually more likely a Mammoth) in the room however is that if these directors were to be removed by the GDC, the remaining non-registrant directors would no longer be able to continue the practice of dentistry and the corporate would no longer be able to function under GDC rules. What this would do for the provision of NHS dentistry would be potentially shattering, with the loss of these businesses. Additionally, is there anyone reading this in any doubt that some corporates would seek to protect their viability by cutting loose the registrant directors and replacing them at the first sign of the GDC taking an interest in them? That would really show the profession just where the priorities of some of these companies lie.

Perhaps this is why there is no appetite to deal with the problem decisively, and instead this will continue to be a problem for years to come, with neither the Registrant Directors OR the GDC taking any form of corporate responsibility for the problems that seem to be within this area of the industry.

More posts from author
Wednesday, 02 January 2019 Modern Professional Betrayals - The Screenshotters
Friday, 13 July 2018 An open letter to Mr Brack of the GDC
Monday, 12 March 2018 What will it actually take?