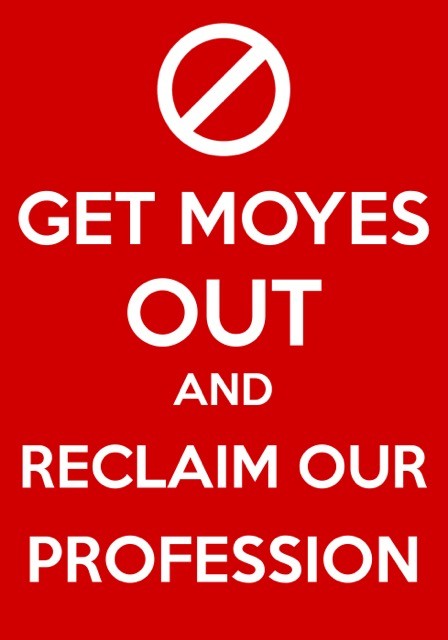 I could basically repeat this mantra for the whole of this blog and I don’t think many would disagree with it (except of course Bill himself). However, I think my readers are more used to having a bit more to get their teeth into, so I’ll pad this out a little more. It won’t run to the 306 pages of the Professional Standards Authority report (here) into the GDC, but the sentiment is the same…

As well as reading my ramblings, I would strongly urge you read two blogs by a couple of fellow colleagues whom I have the utmost respect for. This blog was not originally going to be about Ghosts of Christmases Past, Present, and Future, but it is quite an appropriate analogy.

These are our perspectives on what has gone before, what is still happening, and what we need to do. Three views for the price of one.

I am very aware of the warnings by Dental Protection not to be too critical of the GDC in public. However, I think the publication of the recent report allows me to point out some factual issues in that report, and exercise my right to free speech about a public body without too much fear.

The PSA’s whistleblower report makes fascinating, and at times unbelievable reading. What is clear from it is that the GDC at both Executive and Council level is not only a failed organisation, but a completely and utterly incompetent, insensitive, and dare I say it, corrupt (in the ethical and moral sense) edifice that now needs to be put out of OUR misery.

The report is probably the reason that Ms. Gilvarry has decided the time is right to move on. We can only hope that other regulators do not suffer in the same way as we have in the recent past; I would certainly hope any organisation thinking of engaging her in a similar position is made aware of this damning report and the role she quite obviously played. It’s really not something I’d want on my CV.

From the writing of policies by untrained and unknowledgeable staff who then went on to train more untrained and unknowledgeable staff in the process of discipline (via the Investigating Committee), the lack of scrutiny of the IC’s work, the failure to correct the problems outlined in the previous PSA report, having an ineffectual whistleblowing policy, rewriting it and it still being useless, to the utter lack of oversight by the very Council whose duty it is to ensure the Executive do not go off on a tangent, there can be no doubt the GDC has become a derided regulator both by the profession and the PSA.

So how on earth then can the Chair feel he can remain in post too? Not only that, are the other members of the Council so isolated from the real world situation everyone else can clearly see, that they somehow feel they have no responsibility for this disaster of an organisation that they are at the head of?

Having a regulator that uses untrained staff, described by their own director as just ‘bums on seats’ and ‘clones’, to be responsible for an entire section of a professional disciplinary process is nothing short of negligent. It is admitted in the PSA report that they were under pressure from the Executive to ‘Get the Job Done’, which implies the rulebook went out of the window. When people’s careers, livelihoods, wellbeing and indeed their personal lives are being held in the hands of people quite obviously out of their depth and unaware of their duty, then that attitude by the Executive is utterly reprehensible. Not only that, there still has to be the accountability that is sadly lacking. These members of staff are not specifically blamed by the PSA for the problems, as it was recognized the responsibility was entirely that of those in overall charge of the systems (and some of them are no longer in post thankfully), but one would hope that the moral compass of anybody involved would direct them to make the right decision and now leave.

Whilst the influence of these people was seemingly only on the members of the Investigating Committee, one would hope that the integrity of those on that committee was such as to not be influenced by them. However, by a simple process of extrapolation it makes one worry that other committees were under pressure of being influenced in the same way. The evidence for this isn’t in the PSA report because they didn’t specifically look for it, but we all know the GDC have acted unlawfully before in setting the ARF, which isn’t exactly a great track record. Not only that, but the findings suggest that the situation the PSA investigated with the Investigating Committee leaves the GDC open to further legal challenges via Judicial Review over the decisions it made. I would therefore suggest that EVERY SINGLE case that falls within the dates the report encompasses is reviewed and looked at independently, at the GDC’s own cost. If that bankrupts it, good. Perhaps the Government might take notice when it has to bail out the GDC.

It’s a bit like a parent dealing with a delinquent child; it tends to ignore it hoping things will get better, then gives it a stern talking too, but when it finally has to go down to the police station and bail it out for a serious offence the realisation that there is probably something perhaps seriously wrong with its offspring begins to dawn.

It’s one thing Ms. Gilvarry falling on her sword (or was she pushed?), but the supervisory role of the council during this period was non-existent. In addition, the judgment of the chair has also been called into question over decisions that he made. The sort of important decisions we take for granted will be made correctly by someone in his position. The sort of decisions that if we made incorrectly would see us in front of the regulators fearing for our careers….

There is NO way that Dr Moyes has the respect of the profession as a result. He has shown his lack of understanding of the profession on so many occasions, starting with the infamous Pendebury lecture where he likened us to the supermarket sector. That’s all well and good in this increasingly consumerist world, but you don’t get people losing their careers if they give you the wrong shape carrot or your tin of beans is past the sell by date.

So I address the final part of this blog to those people involved in the whole sorry affair.

To the Investigating Committee Secretariat, you must ensure nothing like this is ever allowed to happen again. The overwhelming majority of people in dentistry are good people, and they are not numbers that need processing despite your instructions to ‘get the job done’ by what appears to be a bunch of Dentist Haters. There is no defence to the excuse of ‘we were just following orders’; Nuremberg in 1947 saw to that. Whilst the GDC whistleblowing policy has been shown to be pretty useless, please bear in mind the need to do the right thing if there are things you are not comfortable with. Please remember, you are not the judge and jury.

To the members of the council; you might have thought that being part of the GDC would be altruistic and for the greater benefit of our profession. It should be. You might even have thought it looked good on the CV. At one time it would have conveyed respect and deference. But given the utter failings and lack of detailed, focussed, professional management that has occurred, you might be better admitting you were unwittingly coerced by the members of a ruling Politburo, which might go some way to rescuing both your CV and your own professional reputation. The Council’s oversight has been so lacking, not even Specsavers could help it.

Finally, wake up and smell the coffee Dr. Moyes. You seem to have absolutely no idea what being part of a profession is, and the members of the council have obviously not educated you properly (or been allowed to). The insight that you rightly demand of your registrants has been sadly lacking by your entire organisation, and given the tone of your emails to us particularly by yourself. I’m just waiting the email from you saying what a resounding endorsement of the GDC the PSA report is, since that’s the usual spin that is put on things at Wimpole Street. Your oversight of the Executive has been completely ineffectual. Your part in this whole debacle cannot be brushed under the table; it happened on your watch so you must bear responsibility at least in part. It’s quite ironic that some of your previous posts have been with the Office of Fair Trading and Monitor. Because there has been absolutely nothing fair about this organisation whilst you have been at the head, and your monitoring of what was going on around you appears to have been non-existent. Dentists might be in the minority of whom you regulate; but believe me without us the profession couldn’t exist. Ignore us at your peril.

For that reason your fitness to regulate has been found impaired and you must face the sanctions.

Dr. Moyes, you must resign.

You must all resign.

Thank you. A good resume of the facts thus far, as indeed are the links given. In fact we might be considered to be failing in our professional duties to the public if we were not expressing our concern. As Tony Kilcoyne said in his thread, this needs thinking over and hopefully BDA/we the people can make some very sensibly targeted representations in early 2016.

0
Thank you. A good resume of the facts thus far, as indeed are the links given. In fact we might be considered to be failing in our professional duties to the public if we were not expressing our concern. As Tony Kilcoyne said in his thread, this needs thinking over and hopefully BDA/we the people can make some very sensibly targeted representations in early 2016. Ruth
Cancel Update Comment