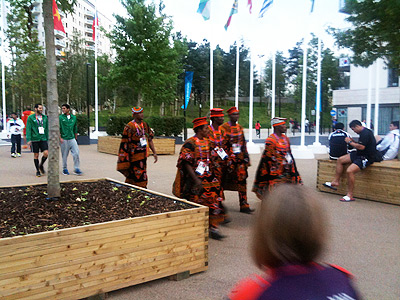 The athletes canteen was as busy as ever on the build up to the opening ceremony. I think appetites were building up in more ways than one in the village now :)
In the Village we could see many of the teams getting ready and the range of traditional dress was a colourful sight to see.
Well I'm sure by now you will have seen all the TV highlights of the Opening ceremony on TV. We just know it is going to be spectacular.
I am working in the clinic from 2-11.30pm that day so I will hopefully get glimpses from the roof during break times and from within the village too, especially for any fireworks display and of course get to see something on the many screens around televising the event.
Interestingly any athletes who are competing at the weekend are not allowed to go to the opening ceremony, all that standing around for some 2hrs+ beforehand isn't good for them and ironically they are tucked away in tunnels until they parade out so they don't actually get to see the 'ceremony' show before they march out in line. Thus I will still be busy until late as many of those not attending the ceremony still attend clinics to get themselves sorted out! 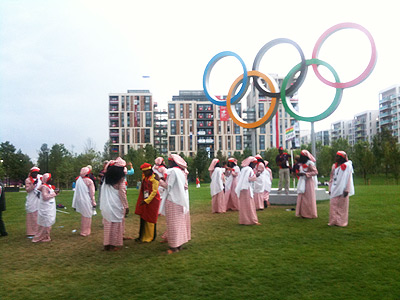