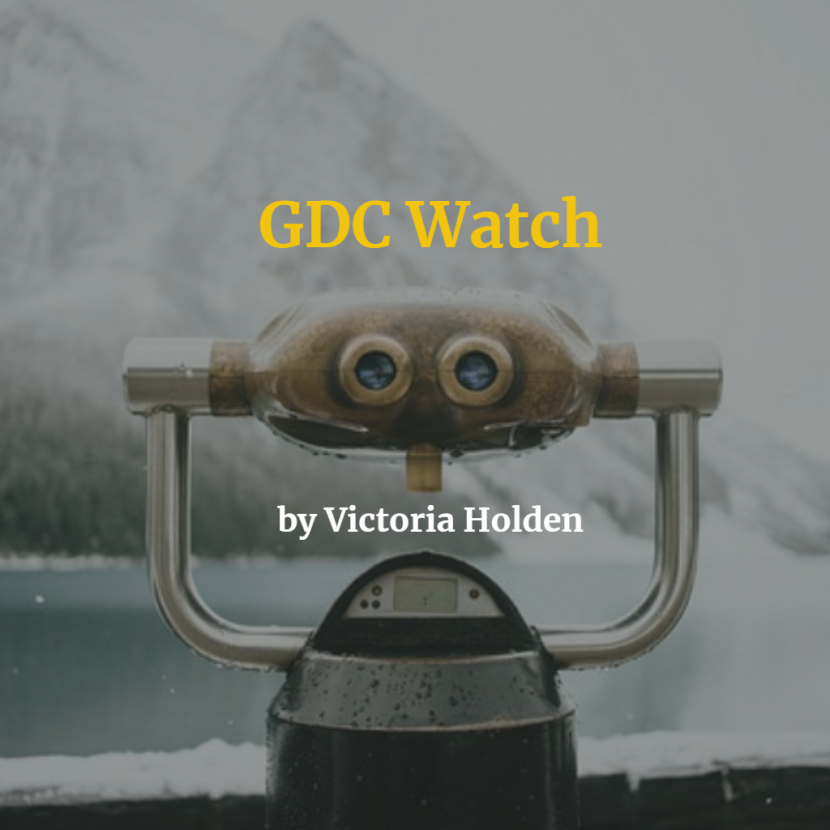 Keeping an eye on the GDC by Victoria Holden.

My next concern relates to conflicts of interests and, again, I have raised these with the GDC and I remain concerned hence I am ‘going public’.

Having been taken to task myself by Counsel once over an issue of a conflict of interest during a Fitness to Practise hearing, I fully appreciate that expert witnesses and FtP panel members must be, or at least be seen to be, ‘whiter than white’.  That is, of course, subject to the phrase not being in anyway offensive to any sectors of society as it certainly isn’t intended to be, or otherwise inappropriately bringing the profession into disrepute, in which case I mean ‘holier than thou’.  Or do I? Truthfully I’m not sure what I can and can’t say these days.

The GDC also seem to grasp the impact that conflict of interests may have on the disciplinary processes, as they have a document titled ‘Managing Interests Policy for Council members and Associates’. In this document it says:

There has already been plenty written on the GDC v Pate case elsewhere.  On Dentistry online their 4 most popular links refer to the proverbial ‘FtP case of the year’. 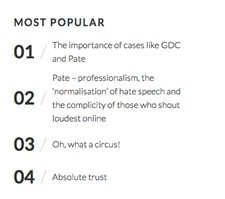 At the time I started writing Mr Hill was winning with over 9,000 views.  Coming up fast at the back with a late article on the subject was Mr Anis with a tidy 4000 views of his re-iteration of the points Mr Hill makes, but it feels with more insistent tone that negative Islamic comment equates to hate speech.   Mr Rees and Mr Watson also give opinions on the subject and there are some excellent arguments made in all these pieces, including within the comments.

Much is made of the fact that the Met Police said that no crime had been committed by Mr Pate and that this means nothing in terms of FtP.  Actually, I would have to concur.  But the problem is that the Chief Constable of the Met did not simply say ‘no crime committed here, everyone move on’.  What he appears to have said as I read it, is that what was said wasn’t that bad.  The police letter, which is not mentioned in the determination, but I shall add it here for transparency, says: 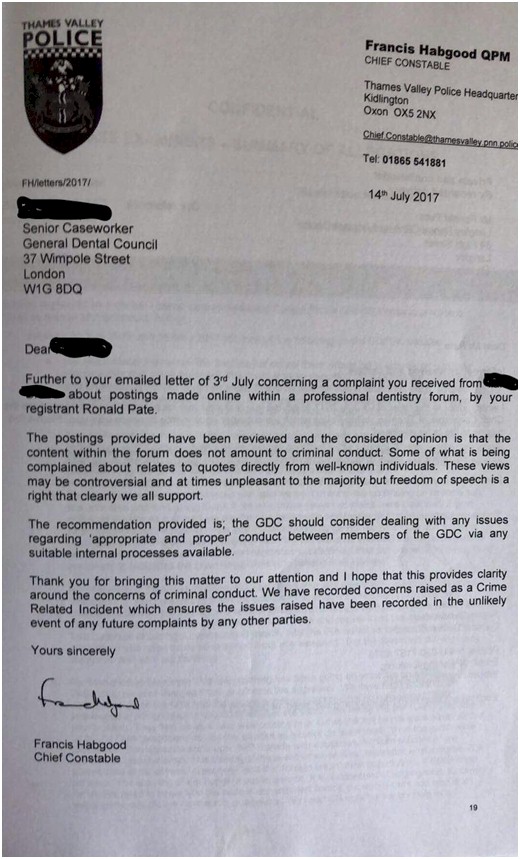 Interesting. Controversial views, and at times unpleasant to the majority, but certainly not criminal, offensive or even religiously offensive says the Chief Constable of the Met.  And, there are well-known individuals saying the same things.  Not an entirely helpful letter for the GDC’s case, which presumably explains why it is not referred to the determination.  The transcript does refer to the letter, but these are not publically available and only available to the parties directly involved in the proceedings.  Well, correction; they are available to the public, at a cost of approximately £250 per hearing day as I found out recently from an FOI.

Anyway, I am side-tracking.  Back to the conflicts issue.  Further to the complaint, and the Met letter, the hearing progressed with an unrepresented Mr Pate, as non-clinical issues fell outside of his defence indemnifiers remit as it has been reported. Having read the transcript, the need for representation at these hearings is clear.  Many of the arguments and points Mr Pate put forwards would have been better made, and no doubt have carried more weight if made by Counsel. ‘Stories of the Law’ by the Secret Barrister who explains how self-representing people frustrate the hell out of everyone else in any kind of legal or quasi-legal hearing.  So the GDC got a great opportunity to make the point that registrants should tone it down, or better still, completely shut up on social media by securing a four-month suspension of Mr Pate.

Chair of the FtP panel, Mr Adair Richards was soon after noted to have listed the General Dental Council as a previous client when tweeting about his new training and consultancy company website earlier in the year:

Indeed, the GDC are right in their warnings that social media can be hazardous.

Unfortunately, the level of trust in our regulator appears to be so low that registrants are now at the point of scrutinising the background and motives of associated individuals. Here, it appears that we have an FtP panel member who has been paid by the GDC to provide training and consultancy to the GDC.  A Freedom of Information request was submitted to request Mr Richards declaration of conflicts and other information about his previous business relationship with the GDC, of which nothing was apparently declared.

I was told that Mr Richards ‘made an error’ on his website, and as if by magic, one week later the website had been altered to remove the GDC from the previous list of clients.  I’ll be honest, and say I am not sure that I buy this is an ‘error’.  FtP panel members go through rigorous testing of their critical thinking skills.  They are not unintelligent people.  To make an error implies that Mr Richards either misunderstood that his role on the FtP panel was somehow an extension of his consultancy services, or perhaps that he was completely unaware that the website copywriter had listed the GDC as a client.  The other possibility that crosses my mind is that it could have been a ‘deliberate error’, made with the intention to mislead potential future clients into thinking the company had trained or consulted with the GDC.  Either way, it does not look good.   The Managing Interests Policy document tells me that these are the possible interests, of which I pick at the very least a ‘perception of a conflict’: 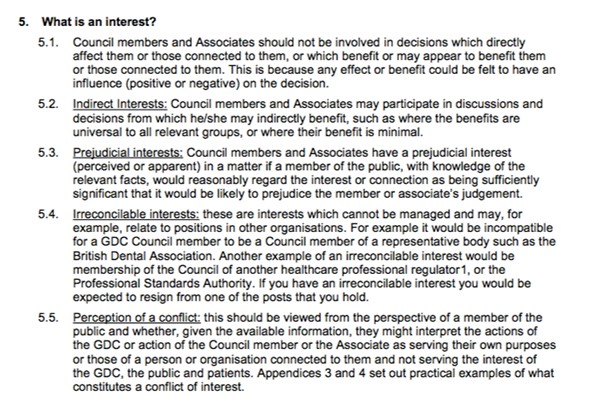 As a result of this error/lie on the website, which seems to have been swept under a rug in Wimpole Street, I also perceive that Mr Richards could be in breach of the Nolan Principles listed in appendix 2: 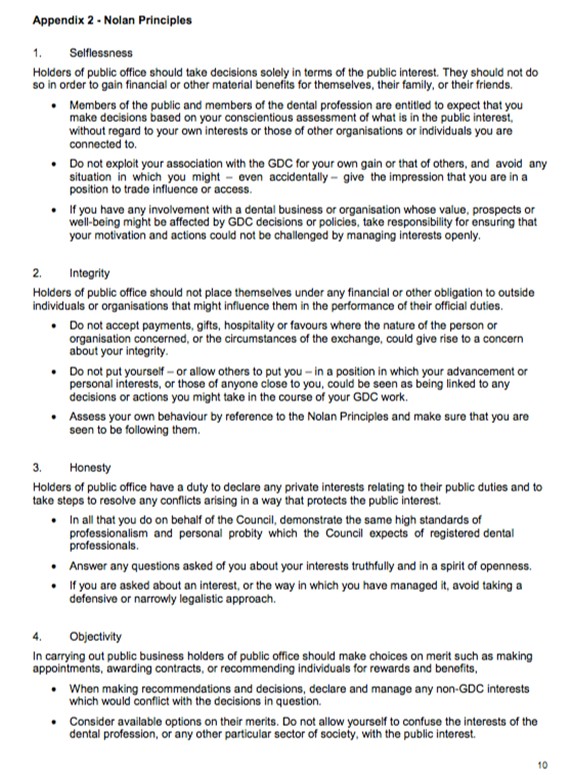 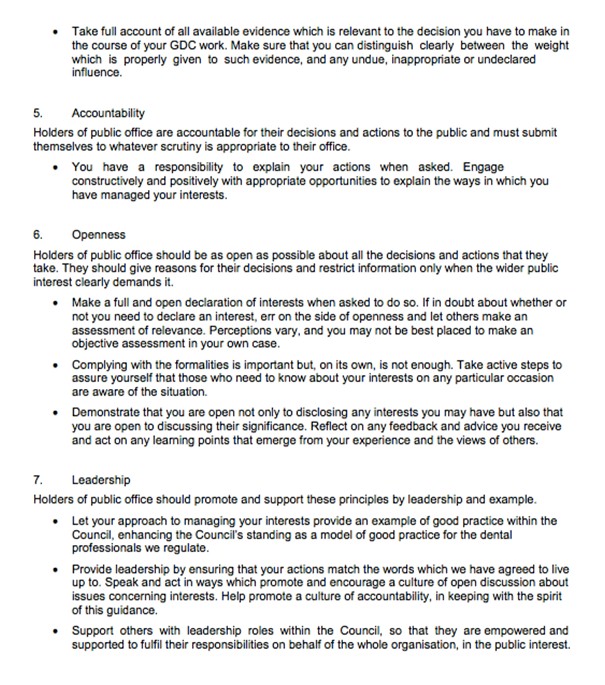 I think it is great that Mr Hill came online to explain why the GDC took the Pate case so seriously, and highlighting why protecting public confidence in the profession is so important.

However, I can’t help thinking that the large number of dissenting registrants would be more respectful of the Pate hearing outcome were it not for the issues that I have exposed here and in my previous blogs.  It is not just the registrants that are responsible for public confidence: the GDC also have a major role to play.  If registrants do not have confidence in the regulator and those associated with them to act professionally and properly this can only lead to damaged public confidence at the end of the day.

Next time, I will be looking at Prejudicial Interests, and delving a bit further into the Pate case.

In the meantime, if you have been affected by any of the issues raised in my blogs, do not worry.  You could waste 15 minutes of your life that you will never get back by sharing feedback about our regulator with the Professional Standards Authority here.