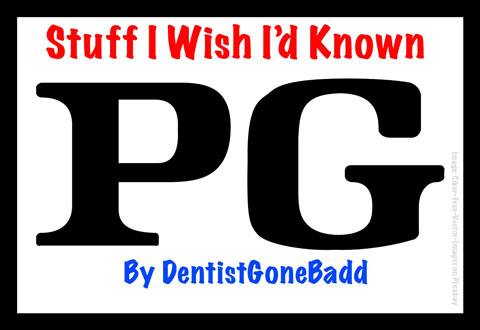 I learned something earlier in the week that made me realise I know NOTHING! The ‘something’ was mouth related and I was made to feel that every dental professional on the planet knew about it, but they excluded me from the secret. I’ll tell you the secret a little later. You will be…AMAZED! Or maybe not. 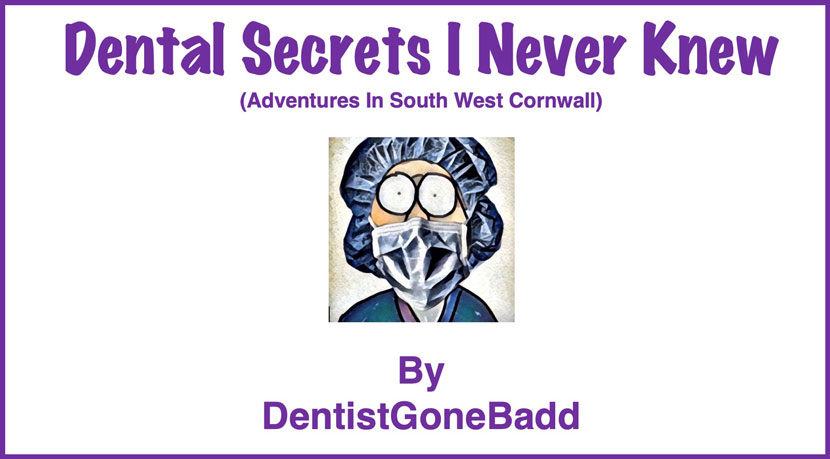 I learned something earlier in the week that made me realise I know NOTHING!

The ‘something’ was mouth related and I was made to feel that every dental professional on the planet knew about it, but they excluded me from the secret.

I’ll tell you the secret a little later. You will be…AMAZED! Or maybe not.

I will list the other dental  things I knew nothing about:

Nope. Never got it.

I wondered if they were even still available, but Google told me they are.  I was pleased to see that with one brand, they now provide a sizing guide.  In the days when I trained with them and used them right up to the early nineties, I swear a guide wasn’t available, and therein lay the problem. Selection was pretty hit and miss in my hands, as was shade selection. I ruined many a temporary crown trying to ram it in too small a gap.

In about 1992, my younger brother paid a reverse dental tourism visit from Europe, where he earns a living as a golf professional.  Working closely with golfers and golfing pupils, the appearance of his teeth was important, so I don’t know why he came to me for some dentistry.

Mark (‘tis not his name) was in need of a couple of anterior crowns and he booked in a ten-day trip to allow for preps and the week-long lab turnaround.  I did the preps and the impressions without incident (apart from the “Have a care mate” when I gave him the locals). I was particularly pleased since, I have to confess, I did the preps after work, with no nurse around.

I had a stab at guessing the right size of temporary crowns to use and they appeared to fit reasonably snugly into the spaces, although they seemed a teensy bit little protrusive.  But I thought for a week, the appearance was reasonably acceptable.  In my defence, it was difficult to judge the aesthetics since his upper lip looked like collagen fillers had gone spectacularly wrong, like Mount Everest had developed a boil.

I adjusted the occlusion so that my brother should have been able to bite through lettuce helped by a bit of premolar tearing, and we were fit to go. I don’t know how I managed to avoid giving him a hand mirror, but I did.

We walked down the High Street to the municipal car park, when Mark stopped and peered into a shop window. He went white and exclaimed “I look like a Bee Gee!”  I looked again  and when he was upright, the incisal tips of the centrals looked approximately 5mm longer than the laterals.

I took pity and we went back into the surgery, where I adjusted them so that the final result was more Cilla Black than Barry Gibb.  My brother wasn’t happy, but at least he wasn’t violent.   Thank heavens for the introduction of  custom-made composite crowns with runny self-cured composite.

The ones I didn’t comprehend were the flattened rounded ones where the manufacturers had made no attempt at introducing tooth anatomy to them whatsoever.  They were perfectly round and didn’t even vaguely resemble anything abstractly related to a child’s drawing of a tooth, being more reminiscent of a blurry unidentified flying object photographed in the early-70’s.

They looked a bit like ill-fitting fez, but with less contour, seven sizes too big for whatever tooth you were working on.  One boss I had, referred to one such  temporary I fitted as “Looking like a sombrero.” In general, they looked like you’d thrown on a ten pence piece after crimping the edges a bit.

Anyway, my technique was to ram them on and get the patient to bite hard, hoping they didn’t come back with their tongue ripped to shreds by the lingual overhang at the fit appointment.

It’s debatable as to whether a dentist needs to know how to thread a Siqveland matrix band, but it was always an irritation that I couldn’t grasp the skill, no matter how carefully and slowly the nurse tried to explain how it was done.

I even videoed a nurse colleague threading one once, but she might as well have presented it in hieroglyphics for all the benefit I gained from it.

I strongly suspect that the threading of Siqvelands is a closely guarded secret skill, passed on from one generation of dental nurses to the next, and should any nurse ever pass on the precious secret to a dentist, it will have consequences which will reverberate through the bowels of the planet, to Middle Earth.

Now I understood the principles behind the use of rubber-dam and could follow both why it was required and how it was applied.  I just couldn’t do it – or rather, I couldn’t do it quickly, on the rare occasions when I tried.  Will leave that last sentence hanging in the air.

What put me off was when I first qualified, I placed a dam on in order to RCT a premolar.  The chap I was treating had never come across dam before, despite having had several root-fillings carried out previously by my predecessor. He gagged all the way through me placing the dam, and when I’d finally secured the frame, he got out the chair and ripped the whole assembly off, apart from the clamp. When he tried to remove the clamp with his rugby player fingers, he dropped it at the back of his throat  and performed the Heimlich Manoeuvre on himself, by throwing himself abdomen first at the nurse’s side of the cabinetry, spilling  all of the endo files we were about to use, all over the deck.

A few protests from similarly uncooperative endo patients put me off rubber dam and endo in general, as did the experience of one colleague whose patient had what appeared to be an allergic  reaction when a hypochorite flush had somehow penetrated the apical foramen on a tooth she was treating.

Don’t know what sinus lifts are.  I truly haven’t even Googled it.  All I know is that they are somehow related to implants, but they are something I never had any yearning to find out about. It all sounded a bit gooey and suffering from chronic rhinitis after a bout of COVID, I loathe the thought of interfering with anything vaguely nasal.

Sinus lifts sound invasive and riddled with potential litigation.  I felt momentarily inadequate recently when a young graduate mentioned in passing, having performed one.  I’m only filled with admiration for anyone who knows what sinus lifts are and are prepared to perform one without searching YouTube for the procedure first.

To me, implants and related surgery just expanded, and greatly increased, your risks of being sued.  I once heard a lecture from an advisor at one of the major dental indemnity organisations and after showing an hour’s worth of implant disasters he’d had to defend, I developed my career-long aversion to implantology.

I once also saw a radiograph and models of a mouth where a practitioner had placed an implant, missed his aim, and erroneously embedded it in the zygoma.  He then expected the technicians to produce a posterior bridge which was still in line with the rest of the arch.  If the techies had tried to make a bridge using the implant as an abutment, it would have looked more like an aerial view of a railway siding.

I was randomly scrolling through various news sites the other day, looking for insights into the Trump impeachment trial, when I alighted on the USA-based BuzzFeed news and entertainment media site. What I read, blew my mind, if you’ll pardon the expression.

Apparently, the revelation came out after BuzzFeed reported that  a user on the social medial App TikTok, proclaimed (parental guidance advised before reading on)

“JUST  FOUND OUT THE DENTIST CAN FIND OUT WETHER (sic) SOMEONE HAS GIVEN (HEAD) OR NOT.”

BuzzFeed went on “The claim spread like wildfire across the app, with many users questioning whether it was actually true. Soon enough, dentists and hygienists on TikTok started weighing in — and yes, it turns out the rumours are true. THEY KNOW.”

Well frankly, I didn’t know.  I was floored.  How could my dental school lecturers and all my dental colleagues over the years, have not told me. I felt so left out.

But there it was!

One  TikTok dentist said "Yeah, sometimes we can tell. And it's usually bruising on the soft palate called petechiae. But unless the patient's really young or shows signs of abuse, we don't care."

Yet another user said "Hey, I'm a registered dental hygienist. Let's talk about this.”  "So a friend of mine sent me this video and was like, 'Oh my god, Is this true?' Yes, it is."

"To say that I'd be able to tell if you did it three years ago? No," she continued. "But if you did it recently and you were a little bit aggressive about it ... Some individuals might have, um, bruising to the palate, if you know what I'm saying. Soooo yes, we can tell."

A general dentist in Michigan went into some detail:

“Okay, here we go. Palatal petechiae. This is what it’s called. If you like, let’s say, sucking on a lollipop. One or two here or there, not a big deal. But let’s say you like to suck on multiple, multiple, multiple lollipops all the time – you got a problem.”

Now when I was practising, I took pride in keeping well ahead of CPD requirements, so I was even more floored when I realised I’d missed this article in the 2018 volume of the BMJ,  “Fellatio-associated erythema of the soft palate: an incidental finding during a routine dental evaluation.”

How did I miss that??

It reinforced the feeling that EVERYONE knew, but me.

Being fair to myself, I rarely read the BMJ, but still.

After these years I thought I knew how to tell if someone had done the deed.  That stems from once, about 20 years ago, finding a small curly dark hair wrapped around the upper five of a blonde lady.  My natural assumption was that it had originated in South West Cornwall, if you see what I mean.

Turns out I am an amateur.

But seriously, I know NOTHING!