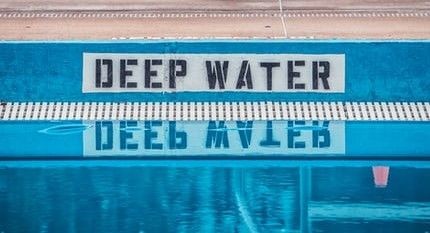 If all the world was a swimming pool.

I sat down to write something that would show insight or perhaps provoke a response if only to get the reader thinking about their situation and how they might improve it.

Of course I would like to impress or inspire enough for you to pick up the phone and employ my services as a coach and business mentor, but that is secondary.

This column was inspired by the behaviour of several clients. It struck me that the best metaphor was that of swimmers at a pool.

We all start unable to swim, as we know it, with poorly defined strokes and no style. Some are lucky to come from “swimming” families who visit pools routinely, or perhaps have their own pool. Others have parents who are frightened of water, have never learned to swim and avoid aquatic recreation.

We all eventually go through dental school where we are taught a version of the theory and practice of survival in the water. Depending on the school there will be an emphasis on different strokes and skills. After five years we can keep ourselves afloat doing our basic strokes - even if we still have to put the occasional foot on the bottom of the pool for security.

It’s what happens after that interests me; it depends very much on the individual, their attitude to risk, their ambition and luck.

Until VT arrived, new dental paddlers were thrown into the deep end of the pool, the wave machine turned on and, although they swallowed a lot of water, their basic stroke helped them to survive. Confidence grew, widths became lengths, a few strokes under water and duck dives.

With VT a lifeguard was assigned who checked they were still afloat and not dragging anybody under.

Many practiced in different pools until they found one that suited them, and the owner sold them a share, some wanted their own pool and built or bought it.

Some new paddlers throw themselves in not sure if it’s the deep or shallow end.

Fewer still climb to the highest diving board jump in and somehow survive.

Some swimmers become perpetual associates. They never trust the water, are frightened of getting out of their depth, they swim widths and occasionally lengths but always stay within touching distance of the poolside. They move from pool to pool dreaming of the one that is warm enough, the water is calm and they can do whatever style they wish. They want their pool owner to supply designer swimsuits and send them for advanced swimming courses that teach skills, unusable in their home pool.

The 21st century has seen a new phenomenon. The individual who inevitably has the “abs & pecs” gets up on the springboard and bounces up and down a few times with great style and noise. They attract a lot of attention, take a few photos for their Instagram feed and head off without getting their hair wet.

There are nervous types who go on expensive courses on swimming. They listen to everybody, swimmer or not about how to swim best. They read books about how to swim. They walk round the pool, put their foot in to feel the temperature. Eventually they go down the ladder and swim but never, ever go out of their depth.

Some become NHS (National Health Swimmers). They used to enjoy swimming, they felt they had a role in life and swimming was their duty. Nobody told them was that there was a wave machine at the end of the pool, the speed of which was inexorably increasing. As fast as they swim, as hard as they work they don’t make any progress. The depth of the pool is increasing, the flippers, worn for compliance not progress, are getting heavier and make things worse, not better. They’re frightened that if they make it to the side of the pool to leave their swimsuit will have holes in embarrassing places.

Who succeeds? The ones who work hard at being better swimmers, who know about all the strokes and concentrate on the one or two that gives them most happiness. They focus on being smooth swimmers, not fast, making as few ripples as possible. They understand that sometimes the pool can get uncomfortable, the water temperature goes up and down and that to be a successful swimmer you need to be fit and keep practicing.

They know that they don’t know all there is to know but they join a club and work with a coach or mentor they will be helped to improve. They talk to other good and successful swimmers and they learn how to stay afloat.

We learn in pools but we must now swim in the ocean. The riptides are dangerous the currents changing and the water deep and cold. This is no place for social swimmers. Only those who are 100% focussed on being successful swimmers will make it to the next beach.

Tweet
Tags:
Dentistry Dental GDPUK.com
Now Where DID I Put That Enthusiasm?
What Dentistry Taught Me About People

Excellent posting Alun and really relevant to present times.
Just wanted to say, if you aren't waving or at least managing to keep your emotional head above the water, you can always call ConfiDental; a helpline that is manned by dentists, free, non judgemental, confidential and here now 24/7.
03339875158 (charged at local rates)
Or visit http://www.confidental-helpline.org

0
Excellent posting Alun and really relevant to present times. Just wanted to say, if you aren't waving or at least managing to keep your emotional head above the water, you can always call ConfiDental; a helpline that is manned by dentists, free, non judgemental, confidential and here now 24/7. 03339875158 (charged at local rates) Or visit www.confidental-helpline.org
Cancel Update Comment