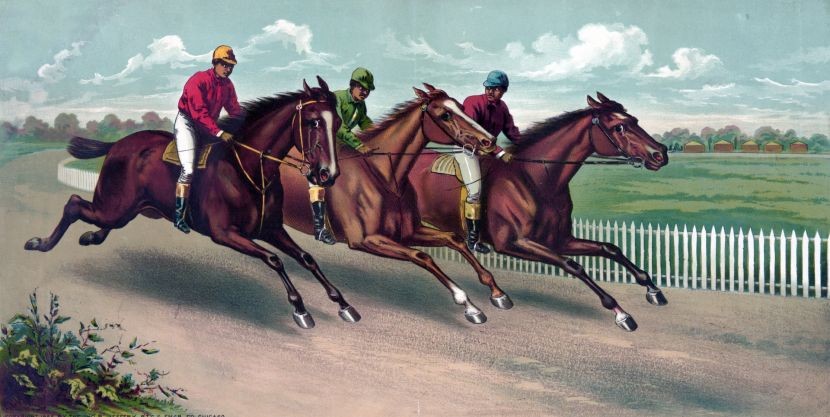 They're all set for the off in the Dental COVID Sweepstake

After three months of lockdown in Dentistry how are the nags doing? Nobody quite knows where the finish line is in this race so the bookies aren’t paying out yet a while; but as far as the punters are concerned there are few surprises.

Let’s remind ourselves of the runners and riders.  First the two back markers involved in their own race, the dental mediocrity cup, these set off slowly and didn’t seem to want to take part in the race, in fact CeeQuooSee’s jockey went home as soon as the starter waved the flag.

First wearing the camouflage colours and helmet of the Whitehall stud is NashBasher with Sara Hurley on board. Not for the first time this runner is wearing blinkers, which have been adjusted by several committees and has trained on a diet of dogma. The rumour is that this poor creature has never recovered from its owners believing it could be a carthorse, a flat horse and a steeplechaser. In fact since its previous trainer, Barty Cockcroft, had it gelded without an anaesthetic in 2006 it has hardly capable of giving children a ride on the beach at Weston-Super-Mare. Rumour has it the glue factory beckons. A great shame because in its day its predecessors gave sterling service on all tracks and courses, whether the going was hard or soft.

Next up is CeeQuooSee. She is a mare from Compliance out of Paperwork. This is one that promised much when it first came on the scene but has repeatedly failed to deliver. Once again its owners were hoping for a Derby winner but as its sire had only ever delivered milk and its dam was used for dressage it looked pretty, but was ultimately useless. Distinctive coloured silks featuring red boxes and black tick marks. It is notable for travelling with dozens of trainers, advisers and stable maids; it often runs with two jockeys to show diversity and fairness. Loves attending these meetings but rarely performs. Uniquely it trains on a diet of tea and biscuits. Its stable mates, Policy document and Protocol feature in the carriage race that takes place after this meeting.

The third runner is GeeDeeCee. Nobody is completely sure of the parentage of this one, for years its line was full of pedigree and thoroughbreds dominated. Great names from his bloodline include Noble Nairn and Bradlaw’s Barstool. Unfortunately it is rumoured that at some time during the last decade the gene pool was adulterated and the resultant progeny have had less than noble characters. Certainly there have been moves amongst the racing followers to limit its appearances due to its spiteful and aggressive behaviour. It wears a muzzle to prevent biting, and the other jockeys give it a wide berth due to its habit of kicking wildly.

GeeDeeCee is trained and ridden by Billy Moyes who has a chequered past in many sports. He is wearing the characteristic hand made pink silks of its owners, a syndicate from the legal profession. For a horse that has a poor character it wins a lot of races probably due to the dodgy handicapping system. Shows great stamina, nothing seems to discourage it. Due to some arcane rule of the Jockey Club the owners get to keep all prize money but GeeDeeCee’s stable fees and costs are paid from donations from other owners and riders.

The fourth of our horses is Wimpole Wonder. The old joke said that to be a successful Dental Horse you needed the stamina of a shire horse, the speed of a Derby horse and the brains of a rocking horse. Wimpole Wonder was little fancied at the start of the year but has proved itself to be an absolute banker. Owned by the largest syndicate in UK dental history there is now a waiting list to buy a share. For many years it was considered to be a plodder with many detractors but during the current season it has shown to have class and determination. The recent change of trainer is probably a coincidence but the good habits learned at Ward’s stables in Herefordshire have come to the fore since the move to Woodrow’s yard.

Unique in training methods is the collegiate method espoused and led by Mick Strong-arm. Cometh the hour cometh the man. Thankfully he isn’t riding the horse, that duty is taken by Damian Apollonian who has come out of retirement for the race. Distinctive colours of pink and white checks representing healthy gums and teeth, with the prominent shield showing the staff and spirochete.

There were fears that a lot of late entries that tried to claim the BDA’s place in the race, Private Parts, College Boys and Facebook Shouters would have an influence. So far anyway the smart money is on Wimpole Wonder and she’s my tip as the stayer to take the honours in the Dental Covid Sweepstake.

Tweet
Tags:
Dentistry Dental GDPUK.com
General Dental Council - Protecting our income and...
What mask should I be wearing?