Alun K Rees BDS is The Dental Business Coach. An experienced dental practice owner who changed career he now works as a coach, consultant, troubleshooter, analyst, speaker, writer & broadcaster. He brings the wisdom gained from his and others’ successes to help his clients achieve the rewards their work and dedication deserve.
Print
5 minutes reading time (1063 words)
Featured 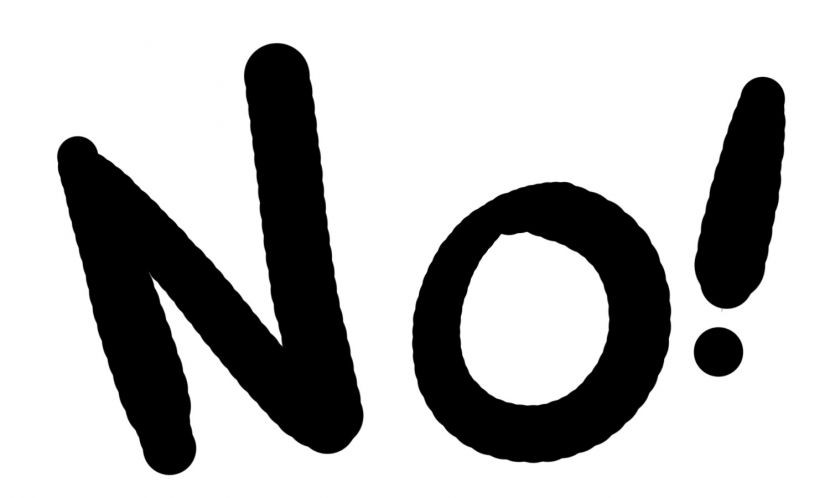 I deal with more and more dentists who are close to or have reached burn out one of the causes of problems is of their own making, it’s their inability to say, “No”.

The temptation in any transaction is to say yes. In the hurly burly of the semi-organised practice where the pressures on our time are made worse by a lack of clear guidelines that facilitates people to say, “no” on our behalf we can always be under pressure to answer in the affirmative.

The NHS is constantly telling their professionals that they should be doing more, that activity is the key to everything, (hell they even called the measurement system units of dental activity) and that to turn someone away is wrong, implying that it’s also unprofessional.

Yet we know that to squeeze a quart into a pint pot leads to wastage, a mess and someone having to clean up later. Here we have one of the paradoxes of the NHS, pile high sell cheap and put in long hours but woe betide you if quality should drop.

One extreme of this is in NHS practices with large numbers of high-needs patients who are not motivated enough to attend regularly but who expect to be seen at short notice. Often it seems they expect a better service than they would get from their GMP.

Time is like land, they aren’t making any more of it so use it wisely. It can be a good servant but a hard master.

Many of us have had the pleasure and pain of starting “a book” from scratch. I did it first for somebody and then twice for myself, possibly a definition of business masochism. In those circumstances faced with an empty diary, a phone that rings sporadically, debts and a growing sense of self-doubt, the knee-jerk response to every call is to get the patient in as quickly as possible, it smacks of desperation but who cares?

Unfortunately that sense of urgency, of fearing failure and wanting to oblige may lead to subservience and can prevent the dental business from maturing. The result can be a manic, uncontrolled version of Dental “ER” where the appointment book is full of unprofitable sessions.

I met a colleague, Mary, at a local meeting once and asked her if she was going on holiday this year, her reply alarmed me, “Yes but I only ever take a week, if I have a fortnight there are so many patients to see with problems when I get back it’s just not worth it.” Shortly afterwards I needed to replace our receptionist for maternity leave and recruited an individual who had worked as a nurse and subsequently run reception for Mary. When her husband’s job relocated they had moved away for three months until he was promoted and re-relocated.

Within a week my appointment book was a war zone, every patient who with even the slightest problem and then summoned to be seen as soon as possible. Double booked, triple booked, lunchtimes, after closing, it was a nightmare. When I asked her what was happening to my beautifully crafted, session based and above all organised and optimised book, I was told Mary had said you had to see the patient at once, that patients were encouraged to ring whenever they wished and she would always see them, on that day.

Clearly there was a difference of philosophy and opinion, she had no hesitation in telling me that I was wrong and we agreed to part. Control was re-established and I fully understood why Mary had to take early retirement a couple of years later - burnt out by a bonfire of her own making.

Ideally the people answering the phone should only do that, but it’s not always possible or practical. They must be trained to ask the right questions and to have a manner that reassures and doesn’t alarm and that reflects your practice ethos.

Jack Welch the former CEO of GE wrote in his autobiography, “Saying no is incredibly liberating. Try it on anything and everything that is not part of your deliberately chosen work-life plan”

But it’s hard especially if you have built a system on saying yes.

The first step to change is to decide what you will and will not do. Then introduce boundaries which cannot be crossed. It’s not my place to tell you what they are in your case but common ones are working longer hours than feel comfortable, missing important family duties and giving your patients access to an “open book”.

The next is to decide when you work at your very best and concentrate on those times for your most challenging (or most rewarding) work.

Finally zone your appointment book and vary those zones from day to day through the week for flexibilty. I am not naive enough to suggest that you can avoid some early and late working but when and what must be under your control.

Delegate everything that you possibly can. Dentists should only do what only dentists can do.

I recently helped a principal who was close to breaking point, his private practice was so busy that he wasn’t able to take a holiday and was missing out on his family life. He had the tiger by the tail not daring to let go but losing the strength to hang on. It took a few hours of questions, of analysis of his business and some questioning to show that his beliefs were not really truths.

Once that was established, the tiger was slain he took a filleting knife to his schedule keeping what only he could do and delegating everything else, including some of his more straightforward implant cases. Sanity was established but more to the point he felt that he was in charge of his life rather than the other way round. He could see the choices, and was able to take them.

No is a wonderful word and might just save your health.