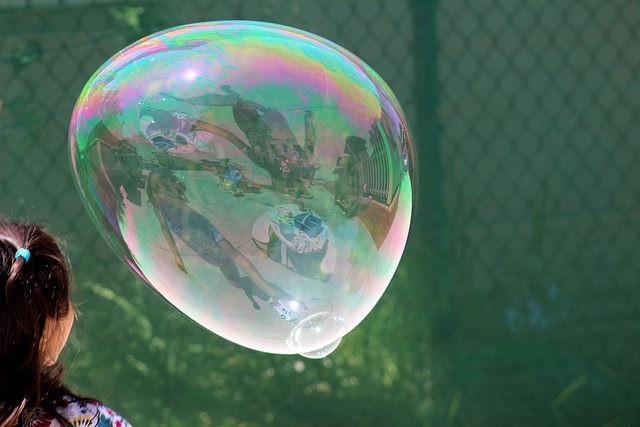 Once upon a time someone started to blow a bubble.

All Pixar films have a simple story structure which can be summed up as:

So if Pixar did the story of recent Dentistry, here’s the movie storyline.

Once upon a time nearly every new dentist went and worked as an associate in General Dental Practice with an NHS contract.

Every day, 5 days a week, they worked for 8 hours and had an hour for lunch. Some of them were better than others and some were worse. Some were faster than others and some were slower. The faster they worked the more they earned. Every month encouragement came from the practice owners, “get your backside in the air and get your gross up”. Every dentist in every practice did the same thing - they repaired broken and diseased teeth. Some liked to spend half a day a week making dentures or braces or using a scalpel - but that was just a diversion from drill’n’fill.

At the end of the month the owner let the associates keep half of what they had earned. This was often a lot of money for a young, newly qualified person. Their friends from university who had studied medicine, accountancy and the law couldn’t understand how dentists could justify the amounts they earned when they were so young and inexperienced and were envious. Secretly many young (and old) dentists agreed, but they couldn’t bring themselves to suggest a change. These were the golden years, there was lots of disease, plenty of patients and the Prime Minister’s purse was bottomless. In fact there were too many patients so in some places people queued to have their teeth out or tried to do it themselves, or so the TV said.

One Day the Prime Minister, Mr Blair, an ex-lawyer, said, “This is not good enough, something must be done”, and he decided that market forces must be applied. But firstly he made the NHS the National Religion and everybody must be an acolyte, for to speak against the NHS was sacrilege. Then he applied the rule of supply and demand, so he opened up lots of new dental schools where intelligent young people could become noviciate monks and nuns of the NHS. Although the words “private” and “dentistry” were considered blasphemy “private” and “university” were compulsory so the novice dentists were made to pay for the privilege of half a decade of confrontation and humiliation. Saint Tony also sent messengers out to all corners of Europe welcoming dentists to England and Wales where the NHS was the envy of the world and the dental streets were paved with gold.

Next his Grand Vizier, HenHouse and his Lord High Chancellor, Broon, said that the purse was closed, there would be no more money, each dentist must make do with what they had last year and the year before that.

Because of that even the fastest of new dentists were not able to get their backsides in the air and the slow ones earned the same as the fast ones. The practice bosses saw that where there had been queues of patients there were now queues of new dentists who had to repay their loans and were competing to work in the NHS churches. Some of these bosses saw this as an opportunity and competed to see who could pay the least. Some were allowed to keep a quarter or a third of what they earned. In his retirement villa St Laurence de Lando looked down, smiled broadly and said, “I told you so”.

Because of that lots of young dentists said, “We must buy our own businesses. We shall become dental entrepreneurs, what ever that is.” So they hocked the family silver, mortgaged their future earnings and sold their soul to the NHS (praise be its name), and in the subsequent sales frenzy this let St Laurence’s contemporaries buy much bigger villas on golf courses than they had ever dreamed possible. “We are the bosses now” trumpeted the new owners, “we shall buy lots of practices and screw down those associates who were not clever dental entrepreneurs like us. Then we shall sell out at the top of the market and make a shedload of cash.”

Meanwhile many quiet, thoughtful young dentists took a long view and worked at their skills. They saw that in the long term the religion would be exposed for the sham that it was and patients would choose between private practices with personal service and Nash clinics where they chose a number and waited their turn for the announcement, “dental cubicle number thirteen please.”

Until finally, one day the bubble burst, NHS dentistry was handed over, lock stock and barrel, to Tesco and many churches became empty shells, a testament to a great failed experiment.

I like the fairy story Alun, but please can we have a happy ending where dental professionals are able to put patients first and still earn a reasonable living not feeling threatened and suicidal worrying about the wicked Witch?

How about a small group of dentists came along who stood FOURSQUARE and were not afraid to stand up to the Bully Goat Gruff?
Would that make for happier reading?

1
I like the fairy story Alun, but please can we have a happy ending where dental professionals are able to put patients first and still earn a reasonable living not feeling threatened and suicidal worrying about the wicked Witch? How about a small group of dentists came along who stood FOURSQUARE and were not afraid to stand up to the Bully Goat Gruff? Would that make for happier reading?
Cancel Update Comment

Well the witch is dead, but that doesn't mean the threat has gone.

It's only a fairy story Keith - real life is not like that at all....is it?

0
Well the witch is dead, but that doesn't mean the threat has gone. It's only a fairy story Keith - real life is not like that at all....is it?
Cancel Update Comment